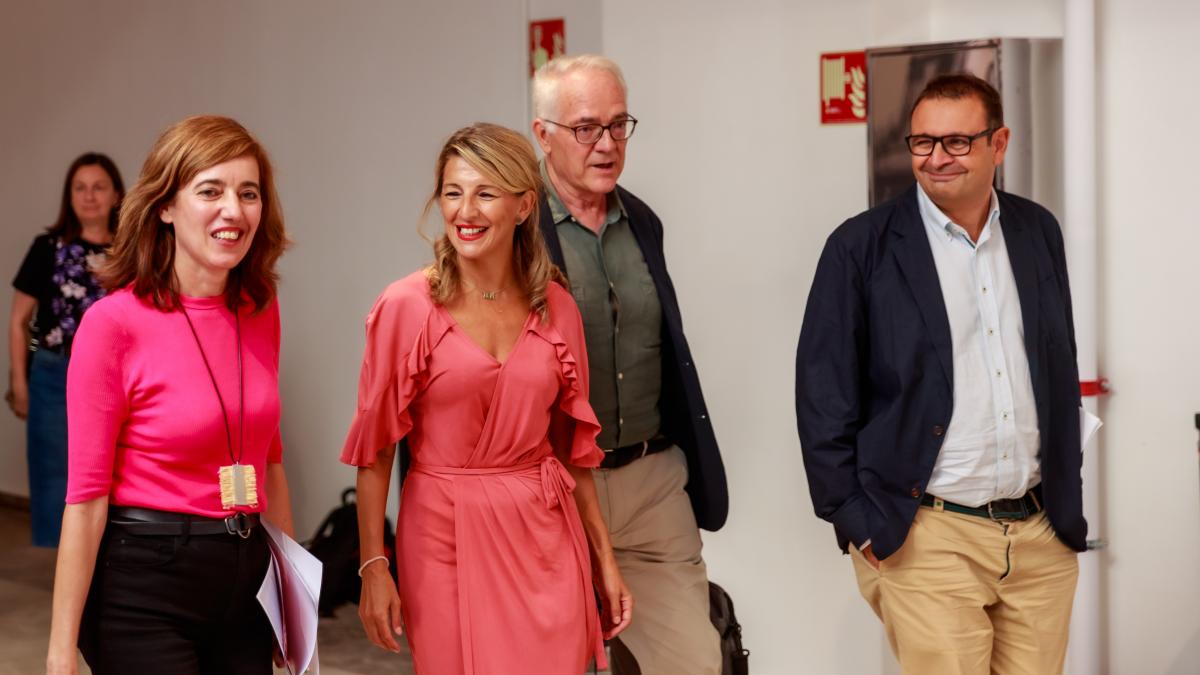 Table Of Contents hide
1. Díaz believes that there have been four country projects, those of Suárez, González, Aznar and Zapatero, and aspires to present an alternative
2. Objective: reinvent the welfare state
3. Intellectuals outside of politics
3.1. Like this:


The Second Vice President of the Government, Yolanda Díaz, presented this Friday the team of 35 people from her Sumar political platform, which will be in charge of leading the collective reflection to design a new project for the country, with a long-term horizon and under progressive parameters, green and European.

At Sumar’s debut, Díaz highlighted that there have been four country projects to date, those of former presidents Suárez, González, Aznar and Zapatero, each one in its time and with a different trend, for which she intends lead “a progressive, green, European citizens’ movement” for “the next decade”.

Díaz believes that there have been four country projects, those of Suárez, González, Aznar and Zapatero, and aspires to present an alternative

He then explained to the journalists, after the obvious absence of Rajoy and Sánchez in his mention to the public, that these, in his opinion, have not been able to undertake long-term country projects due to the socioeconomic crises with which they have had to deal with day to day.

Díaz has spoken before a hundred guests and journalists at the Espacio Larra, a sober premises with hardly any furniture located in a central area of ​​Madrid, with a wall behind him barely decorated by some posters in red, pink and white colors in which read the word Add with a single printed and repeated subtitle motto: “For a new country”.

Several of the 35 outstanding professionals in their fields who will direct the sections by subject with which they will continue the process of listening to society that she began months ago with a view to bringing together the left before the next general elections.

“Imagination cannot be restricted to the size of a ballot box”, stressed the also Minister of Labor to highlight that the 35 professionals who will lead the Sumar areas do not have to be on future electoral lists, but rather their task will be to coordinate their respective groups (between 15 and 35 people each) to prepare diagnoses and proposals.

February, approximately, is the final date for this process, as they have pointed out from the political project, while Díaz, in his speech, has not set time limits and has emphasized that he wants it to be “a long, deep look”, with the one to take “a step back to review our history” to better glimpse the future.

Ten years are necessary, said Díaz, to face the great pending transformations, such as energy or digital, while “the short term has caused great ills in Spanish society.”

“We need to reinvent the welfare state”, pointed out the leader of Sumar, to add that this involves “another great pending task, the reform of taxes” to end the “enormous fiscal injustice” that there are “many hyper-rich people that does not contribute” to the treasury, in “a flight from above”.

He has added, in this sense, that “this is what Sumar is about, there cannot be one tax now and another tomorrow”, to state that he wants a platform for thought and a design for a decade. “A new social contract that is green, feminist, intergenerational and pacifist”, Díaz has demanded before defining his project as “a progressive, green and European citizen movement”.

Intellectuals outside of politics

The political scientists Marta Lois and Ignacio Sánchez Cuenca participated in the presentation -who will lead the care and democratic quality groups, respectively-, in addition to the magistrate of the Supreme Court Fernando Salinas -in charge of justice- and Francesca Bria, who has intervened telematically from Rome and will coordinate the digitization team with rights.

The political scientists Joaquim Brugué, Ruth Ferrero and Arantxa Elizondo will be in charge of administration and good governance, international politics and feminism and equality, while the philosopher and sociologist César Rendueles will be in charge of welfare and social rights; the former leader of the CCOO Agustín Moreno, from education, and the doctor Rafael Cofiño, from health and mental health.

The culture area will be led by the Basque writer Bernardo Atxaga, who is an economist and philosopher. Other economists in the Sumar management team will be Jaume Pallerols (SMEs), Rafael Muñoz de Bustillo (productive model) and José Antonio Alonso (human rights).