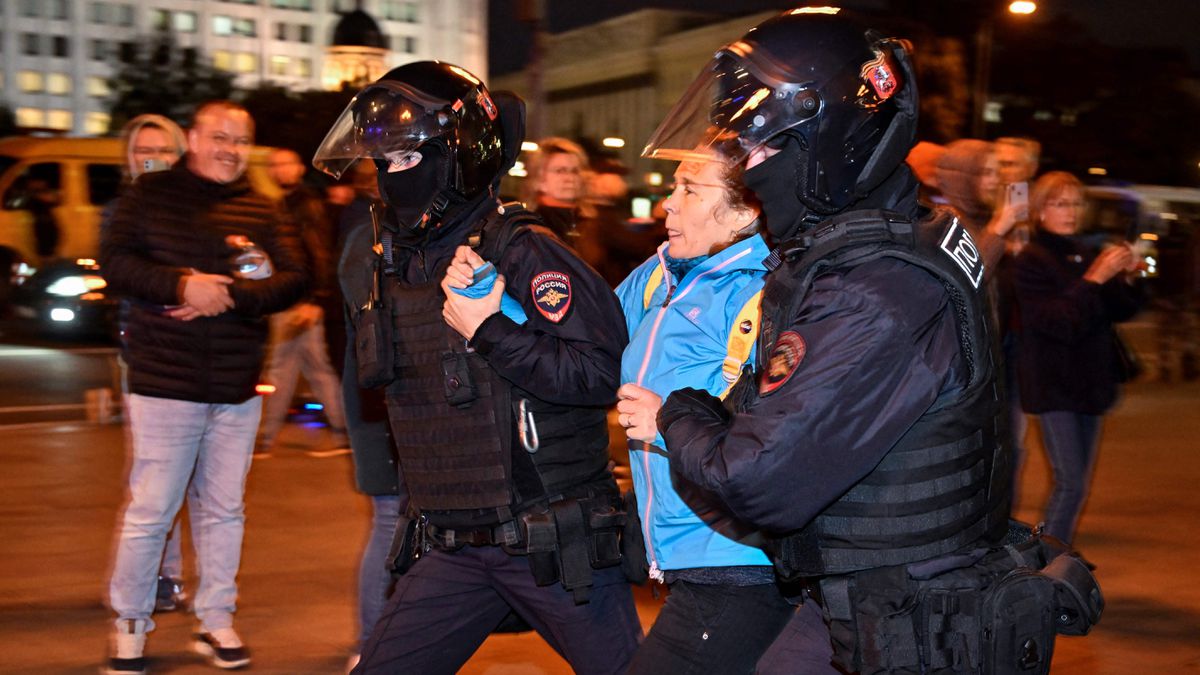 
shortly after Vladimir Putin decided on partial mobilization In order for the Russian population to go to fight in Ukraine, the opposition movement Vesna called for protests in all cities of the country. Thousands of civilians took to the streets to show their anger at the Kremlin’s decision, risking a demonstration in Russia that could include prison sentences and being sent to the front. According to the data received from, the police have arrested more than 1,300 people from 38 places Independent Organization OVD-Info, In Moscow, the march brought together more than a thousand protesters.

With a play on words in the Russian language, the organizers had replaced the word mobilization on their posters with graves. “Our fathers, brothers and husbands will be thrown into the meat grinder of war. Why will they die? Why will mothers and children shed tears? For Putin’s palace?” The group drew condemnation on social media.

Protesters in Russia regularly face heavy crackdown, which has intensified in opposition to the crackdown in Ukraine. Now, even those who dare to speak out against the Kremlin’s decisions are facing a new law to discredit the actions of the armed forces in Ukraine. These behaviors are usually settled with fines, although violations or recidivism in some specific cases can lead to a prison sentence of between three and 10 years. 15 A prison sentence is considered if the judge believes the detainee puts the military in danger, although this peak has not yet been reached. Data close to the Kremlin also leaked that detained protesters could be included in the mobilization phase.

The march visited the tourist Arbat street in Moscow, which turned out to be a mousetrap, where a strong police deployment led to the arrest of dozens of civilians. “Not for war!” and “Shame!” He chanted.

“We don’t need a war, you’re wonderful,” an elderly woman shouted toward the headquarters of the Russian Foreign Ministry, applauding the huge column. Its chief Sergei Lavrov represented his country to the international community in New York this Wednesday United Nations General AssemblyExactly the same day its president threatened to use nuclear weapons if Ukrainian forces proceeded to recover territory occupied by Moscow.

“Do you know why we protest, child?”, a middle-aged protester reprimanded a policeman. There was heavy deployment of security forces. Agents of the Interior Ministry and Rosgvardia – the National Guard, the president’s personal army – were monitoring the entire center of Moscow on Wednesday, from Pushkinskaya Square, which has been the center of protests in the past, to Red Square.

Of the dozens arrested, some were taken away. Young and old, parents and grandparents showed their outrage at the forced mobilization, which, according to the Ministry of Defense, would bring in at least 300,000 compatriots, or them.

During the protests, another Russia supporting the Kremlin’s invasion was also heard. One youth shouted “traitor” at the protesters, and the other was driven away by his partner after facing critics.

The protest took place in a street where T-shirts with Z and U are sold, which are used by the armed forces in the war against Ukraine and which have become symbols of Russian aggression. The march lasted barely an hour. After the intervention of the police, the passers-by once again occupied the road. Many of them were protesters, before they fell silent again so as not to be arrested.

In the days after February 24, when Putin ordered an attack on Ukraine, hundreds of people defied the authorities and protested against the war. Expressions of discontent were severely repressed and Some 15,000 face fines or prison sentences., Since the protests that took place on Wednesday in early March have not been called again.