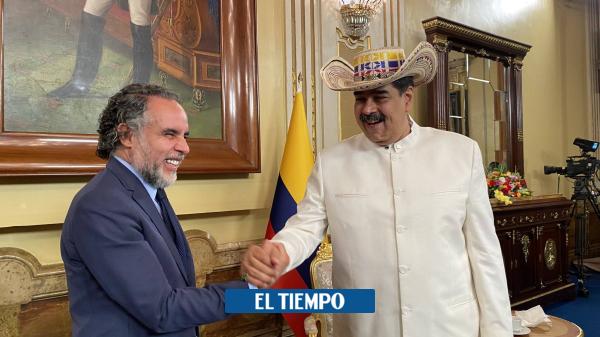 Armando Benedetti, Colombian ambassador to Venezuela, wrote a trill on his social networks in which he ridiculed the members of the opposition in that country for allegedly blaming each other for the embezzlement of the Monómeros company, a subsidiary in Colombia of the Venezuelan oil company. Pdvsa

“Venezuela’s opposition is very funny. Now those of Guaidó say that it was Leopoldo’s who looted Monómeros and they wonder why former President Iván Duque did not investigate,” said the diplomat, at a time when the two countries are moving towards the reopening of bilateral relations.

The affirmation of the Colombian ambassador in Caracas came hours after the Nicolás Maduro regime regained control of the petrochemical company, which had been in the hands of the opposition Juan Guaidó for nearly three and a half years.

During this period, Monómeros was intervened by the Superintendency of Companies in Colombia.

It is just a trill. “However, warns Nadia Pérez, a political scientist at the National University and a researcher at the Institute of Political Studies of the Autonomous University of Bucaramanga, it has a lot of scope in this world of social networks and the current delicate situation that the reestablishment of relations between two countries”.

“With this one he is overstepping his duties as an ambassador,” she says. For the analyst, in addition, strategically it is wrong at the moment.

She lists several aspects undertaken by the two governments to reestablish relations both in political announcements and in tangible facts: Adjust the schedules at the airports for the reopening of flights between the two countries, meetings of businessmen, repair of vehicular bridges . There are so many simultaneous tasks, she reflects, that communication must be centralized in them and what is least expected is to open a debate with an opinion that, moreover, goes against a particular political group.

The message from the Colombian ambassador in Venezuela in which he describes the “opposition as funny” coincided with the publication of the report by the United Nations Independent International Mission.

It says that the state’s intelligence services, both civilian and military, function as well-coordinated and effective structures to “repress dissent by committing crimes against humanity.”

“Our investigations and analysis show that the Venezuelan state uses the intelligence services and their agents to suppress dissent in the country. This leads to the commission of serious crimes and human rights violations, including acts of torture and sexual violence. These These practices must cease immediately and those responsible must be investigated and prosecuted in accordance with the law,” said Marta Valiñas, president of the Mission.

According to a press release from the Mission, the report “provides a detailed analysis of the role played by people at different levels of the chains of command of the General Directorate of Military Counterintelligence (DGCIM) and the Bolivarian National Intelligence Service (SEBIN), in the execution of a plan orchestrated by President Nicolás Maduro and other high-level authorities to repress opposition to the Government.”

The Mission claims to have documented 122 cases of victims who were subjected to torture, sexual violence or other cruel, inhuman or degrading treatment perpetrated by DGCIM agents. The torture was carried out at its “Boleíta” headquarters in Caracas, and in a network of covert detention centers throughout the country.

The Mission investigated 51 cases that occurred since 2014. The report details how the orders were given by the highest-level authorities to lower-ranking officials.

And it adds that the violations and crimes of the SEBIN and the DGCIM continue to this day, since the same structures, patterns and practices are maintained in “a climate of almost total impunity.”

However, Diego Casas of the Latin American Faculty of Social Sciences (Flacso) considers that “the ambassador’s tweet is not an isolated event, nor a simple comment, but quite the opposite. It is a message that is inserted in two bets that the Government of President Petro has been raised: the first thing is the recovery of relations with Venezuela. And that happens, among other things, by returning the company to the Government of Nicolás Maduro. The second is that in the commitment to Food Sovereignty that has been proposed Petro, Monómeros plays a large role, as it is one of the main suppliers of fertilizers (37%), and this company was affected by the various maneuvers that occurred in the previous period.”

“In that order of ideas, Monómeros is a strategic issue for the future of Colombia, and it is to be expected that there will be more tweets alluding to the subject,” says the political scientist Casas.

The trill, which must be reiterated, is only one, however it marks a contrast to the silence of the ambassador in the face of the claims of Colombian authorities regarding the presence of criminals from Venezuela in Colombia, such as those denounced by the mayor of Bogotá Claudia López.

And also with the presence of the number one of the FARC dissidents, Iván Márquez, who, according to intelligence agencies, is recovering in Caracas from an attack protected by the Venezuelan government.

About this fact, Gustavo Gómez, director of Caracol Radio, wrote in a column in the Spanish newspaper El País:

“Where, we ask ourselves, is Ambassador Armando Benedetti? In Venezuela or in Monaco? He is not known to have a strong position on Venezuelan crime in Colombia or on Colombian guerrillas and criminals sheltering comfortably in Venezuela. Nothing. He barely insists , with an already frankly suspicious obsession, in that we buy gas from Maduro”.