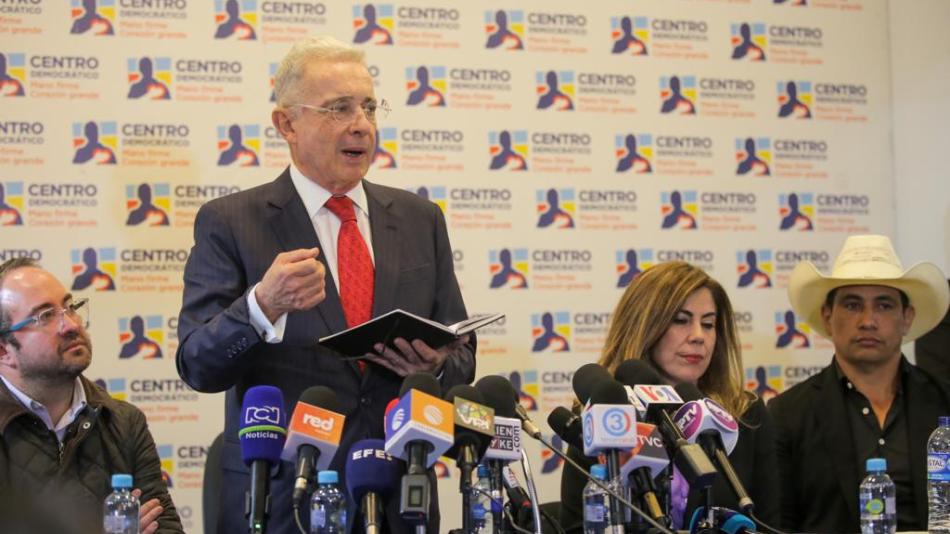 The president-elect, Gustavo Petro, met this Wednesday with former president Álvaro Uribe, leader of the Democratic Center party. The appointment, proposed by Petro a few days after his election, lasted for more than two hours.

The meeting generated wide expectations given the political differences between the two, since Petro was a harsh critic of the management of Uribe, who was president between 2002 and 2010, especially in relation to the management of the armed conflict, and in the Senate, where they were colleagues, they also staged strong clashes.

At the end of the meeting, the president-elect left without giving statements to the journalists, but the former president did organize a press conference. Uribe stated: “It was an dialogue that makes us grateful because we listened to him and he listened to us. It was very constructive.”

Petro, hours later, wrote on his Twitter account: “Hopefully the country can see the scenario of the dialogue of differences. The conversation with former President Uribe was helpful and respectful. We found the differences and the common points. There will always be a government dialogue -opposition”.

Next, the details revealed by former President Uribe on the issues addressed in his meeting with President-elect Gustavo Petro.

(See also: The annoyance of the Democratic Center with Uribe for accepting dialogue with Petro)

“We express that we share all the effort that is made so that the country accelerates the overcoming of poverty. But that cannot be at the cost of withering the private sector. That policy would become unsustainable and lead to more poverty (…) We had the opportunity to tell the President that it is as serious for the country not to accelerate the overcoming of poverty as it is to affect the private sector, which is ultimately the source of resources to overcome poverty.”

“We reiterate what we think in the party (the Democratic Center): that taxation has to be kind, that the taxpayer pay with pleasure and without fear, that they not be put with excessive taxes to seek evasive maneuvers. The current taxation of the government Duque has shown his benefits and has helped the economy grow.”

(You may be interested: Gustavo Petro, in appointment with Germán Vargas Lleras)

“We express our concern about the estate tax. Here there are some patrimonies that, no matter how well they are exploited, give returns of less than 1%, imposing on them what some advisers to President Petro have said, of 4.8%, ruins them, confiscates them“.

“The president has a comprehensive sense of security. We believe that Colombia has to substantially increase the financing of the popular economy, and with President Petro there is an agreement on this matter as part of the comprehensive solution to violence and insecurity. But We express our concern about micro-trafficking, which does so much damage to Colombian society.“.

Petro and Uribe meet in a building in northern Bogotá.

“I insisted on our thesis of reforming the JEP to give a really different treatment to the members of the Armed Forces. Because it is one thing for an ex-guerrilla to admit a crime and another for a soldier to incriminate himself to save his freedom, admitting a crime that was the opposite. We leave it (to Petro) as a concern, but this party has to continue advocating in favor of the military and police.”

“I also spoke (to Petro) about some public order problems that need the force of authority. Not to repress the protest but to avoid violence.”

“The President discussed with us the issue of land and his idea of ​​an agrarian reform, one in the style of South Korea. On this issue we heard him widely and we told him that here you need a balance between an acquisition of land for peasant communities and the protection of the productive sectors of the countryside. It would be very serious for the country to drive away the productive sectors of the countryside.”

“President Petro made a favorable comment on the multipurpose appraisal that the government of President Duque is carrying out.”

“On the subject of health, we presented the thesis that the Colombian system has solidarity, it has insurers that are not intermediaries and it has providers“.

“On the pension issue, for example, it seems good to us that President Petro advances in the pension for poor older adults, who have a decent income. We support everything that is done to resolve poverty issues, but we told him that with good care, that the productive sector does not wither”.

(You may be interested: In Spain they file a complaint against President Petro for kidnapping)

“We express our concern about what may be the termination of the pension funds. Because if they are going to force all contributions up to 4 minimum wages to go to Colpensiones, that represents 80% or 90% and the funds run out, and the pension funds are savings for the worker and the country. A country that in times of crisis has 80,000 million dollars in pension funds, money well managed, is a country that has great insurance.”

“He (Petro) has some concerns about the institutionality of Ecopetrol. I asked that these concerns be transmitted to President Iván Duque.”

“We talked about the issue of transition. I believe that your government here receives a good inheritance because the country has advanced in alternative fuelsrenewables, and has regained the chances of not running out of oil and gas.

“Let’s say that in a few years oil will not be used as fuel due to environmental issues, but there are many uses, such as in construction. We listen to the President with respect and we communicate with respect.”

“I boldly told (Petro) that I voted for the two ministries that Iván Duque created (Sport and Science, Technology and Innovation) out of loyalty but with disaffection because our party (the Democratic Center) has to cling to austerity. I believe that sports and science would not have needed ministries but budget and policies“.

Channel of dialogue and opposition

“I told him: President, allow me a dialogue channel with you. I will not bother you much, it will be to talk about these country issues (…) What we can approve we will do without calculation, we will do it gladly. If there are issues on which our concept can serve for an agreement, fine. And in what we have to disagree, count on a reasonable opposition“.

“The Democratic Center will support many issues without calculation. Issues for the elderly, solving poverty issues without affecting the private sector. In many issues it will seek to present alternatives and in those issues, as an opposition force, on my part and respecting the party , there has to be respect and arguments to feed the permanent opening of a dialogue channel”.

“For us there are two concerns: the presence of terrorism in Venezuela and the lack of respect in Venezuela for democratic values. But the intention with Venezuela (to resume relations) is very clear.”

“We know that President Petro is going to normalize relations with Venezuela. I anticipate that this is a reality.”