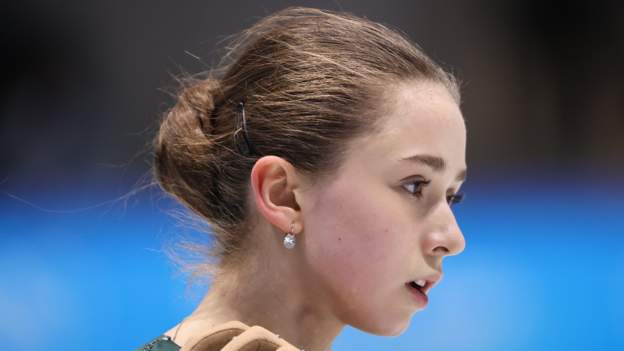 Table Of Contents hide
1. Remember the “human side of history”
2. Valieva’s future in the hands of a three-person panel
3. Like this:


The scrutiny of those around Kamila Valieva has increased with the International Olympic Committee formally calling on the World Anti-Doping Agency to investigate adults working with the teenager.

The 15-year-old Russian’s failed drug test has cast a dark cloud over the Beijing Winter Olympics, and her age raises questions about how a girl became embroiled in a doping scandal.

The IOC had said on Saturday that it would welcome an investigation into his entourage, but has now gone further and formally called for one.

“This is a constantly moving target and we continue to work on it,” IOC spokesman Mark Adams told a news conference.

“We have an entourage commission … we want Wada to investigate the entourage in this case. A lot has been done. Our response continues to improve and address the entourage issues.”

Valieva, meanwhile, was training in Beijing on Sunday, hours before a hearing that will determine her Olympic fate.

The Russian, who failed a drug test in December, she will find out on Monday if she can compete in the women’s singles event in Beijing on Tuesday and if she will be stripped of the team gold.

A hearing is set for Sunday at 12:30 GMT and a Court of Arbitration for Sport (CAS) panel will then decide whether to suspend it.

Remember the “human side of history”

Valieva has continued to train amid uncertainty and media attention, at times with tears in her eyes.

The stuffed toys on the tarmac are a reminder of his tender age and the reason this case has been even more shocking than other failed drug tests.

Olympics chief executive Christophe Dubi said it was important to remember the “human side of this story… to think of a 15-year-old in this situation.”

“We need to treat this situation very carefully.”

At times in practice, Valieva has been hugged by her coach Eteri Tutberidze, who is in the spotlight.

In a brief interview with Russian state television, Tutberidze said she was sure the teenager was “clean and innocent.”

The IOC said on Saturday that when it came to considering the entourage, that included coaches, doctors and parents.

Valieva’s future in the hands of a three-person panel

The IOC says Cas’ hearing will only be on the lifting of Valieva’s provisional suspension, which was imposed by the Russian Anti-Doping Agency (Rusada).

Rusada will hear the full case because the drug test was in a national competition, but Wada can appeal against any decision.

Valieva tested positive for the banned substance trimetazidine at the Russian Figure Skating Championships on December 25.

But it was only reported on February 8, a day after she became the first skater to perform a quad jump at an Olympics to help the Russian Olympic Committee team win gold.

When the problem came to light, the medal ceremony was postponed on short notice.

Medals for the team event, in which the United States finished second, Japan third and Canada fourth, will not be awarded until the outcome of the hearing.

Trimetazidine is used in the prevention of angina attacks, but it is on the banned list because it is classified as a cardiac metabolic modulator and has been shown to improve physical efficiency.

Valieva has been allowed to train after a successful challenge against her provisional suspension by Rusada.

She is the favorite to win and she was flawless in training on Sunday, landing her quad jumps.

But the IOC, WADA and the International Skating Union (ISU) have now appealed to Cas against Rusada’s decision to allow him to continue.

The Cas panel will be made up of President Fabio Iudica from Italy and arbitrators Jeffrey Benz, from the United States, and Slovenian Vesna Bergant Rakocevic.