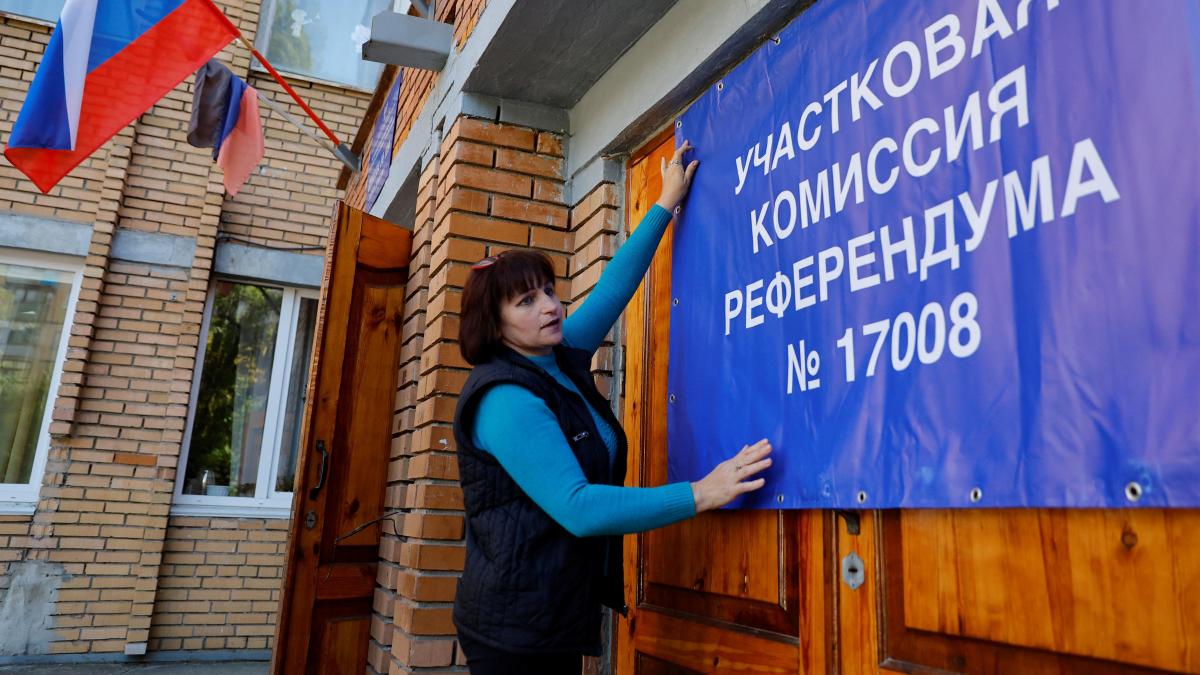 Table Of Contents hide
1. different day
1.1. Citizens will be able to vote at home or at special places for the first four days. Last one, schools will open
2. “Dummy” Voting
2.1. Western countries will not recognize the results and EU warns of new sanctions
3. no full control
3.1. The Russian army controls almost the entire territory of Luhansk and Kherson, but more than half of Donetsk and Zaporizhia.
4. eight years ago
4.1. The process is reminiscent of Russia’s annexation of the Crimean peninsula in 2014.
4.2. Like this:

Express referendums called by pro-Russian officials from the self-declared People’s Republics of Donetsk (DPR) and Luhansk (PLR), as well as Kherson and Zaporizhia, began this Friday in the first phase to allow these four Ukrainian regions . Soon captured by Russia. ,

The vote, dismissed as a “spectacle” by Ukraine’s government and the West to follow the Kremlin’s plans for its neighbor, will last five days: from this Friday, September 23, to Tuesday, the 27th.

Citizens will be able to vote at home or at special places for the first four days. Last one, schools will open

Alleging security reasons, during the first four days, citizens can vote in their homes and in specially enabled places. General polling stations will open only at the last,” Galina Katyushchenko, the head of the election commission of the Zaporizhia region, told Interfax. The same system will be used in other regions as well.

The pro-Russian chiefs of these regions earlier this week announced the holding of these race votes on September 19-20.

The DPR and LPR in eastern Ukraine declared themselves independent in 2014, but Russia recognized them as sovereign states only last February, Russian President Vladimir Putin ordered the launch of a “special military operation” and The biggest armed conflict began. in Europe since World War II.

Officials from these entities will ask voters if they support entry into Russia. In the Kherson and Zaporizhia regions in the south, the ballot paper would also raise the question of whether these regions supported the formation of an independent state in the style of the first two.

The decision they intend to make affects the entire territory of the Ukrainian province, although so far the Russian military controls everything. The Russian authorities in Zaporizhia also intended to declare the independence of the entire region, including the capital (of the same name), which remains under Ukrainian control.

Russian and pro-Russian troops almost completely controlled Luhansk province, but after retaliation that the Russians were driven out of Kharkiv this month, and based on the Ukrainian push, they could retreat. On Monday, Ukraine announced that its troops had recaptured several cities in Luhansk, including Bilohorivka, the last city taken by the Russians last July, just 6 kilometers from Lysichansk, when they The whole area was considered completely controlled.

The Russian army controls almost the entire territory of Luhansk and Kherson, but more than half of Donetsk and Zaporizhia.

After seven months of military intervention, Moscow has not been able to overcome Ukrainian resistance in Donetsk and they only control 55%.

Most of the territory in Kherson is in Russian hands, but the Ukrainian army is still present. And in Zaporizhia, more than half are controlled by Russians, to a lesser extent by Ukrainians.

On Wednesday, September 21, a day after the referendum was announced, Putin decided on partial military mobilization to recruit and include 300,000 reservists in his Ukrainian campaign. Recruiting centers began calling for future soldiers on Wednesday, and in the days since, images of young men on their way to training centers before their final destinations, in most cases on the war front in Ukraine, have been released. ,

The process is reminiscent of Russia’s annexation of the Crimean peninsula in 2014.

In his televised message to the nation, Putin assured that he would support the outcome of the referendum.

After the votes, pro-Russian leaders in these regions will formally ask Moscow to join the Russian Federation. The Kremlin may accelerate this process, as it did in 2014 to annex the Crimean peninsula, which is considered illegal by the international community.

Ukraine’s President Volodymyr Zelensky assured that these votes do not change anything in his task of freeing his country from Russian presence. Ukrainian Foreign Minister Dmitry Kuleba said that Kyiv will “liberate these regions in the future”, “no matter what they say in Russia.”

Western countries, led by the United States, France and Germany, are not going to recognize the referendum results, and have described these days as “hypothetical” or “farce”. The European Union has warned of new sanctions against Russia.

UN Secretary-General Antonio Guterres also condemned the referendums. This Thursday he recalled that any occupation of territory by force is a violation of international law.