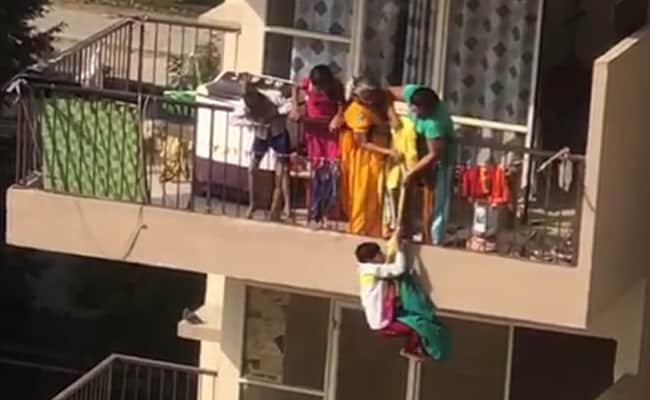 The boy’s mother, it was learned, has repented of her action that risked her son’s life.

A woman living on the 10th floor of a Faridabad skyscraper hung her son by a sari to drop him on the floor below so he could retrieve the clothes that fell there. She then pushed him back the same way.

A shocking video of the boy clinging precariously to the sari as he is slowly carried up from the 9th to the 10th floor has now gone viral, with social media users criticizing the woman for her carelessness that could have cost her son’s life.

The incident took place at the Florida apartment complex in Sector 82 of Faridabad.

Dismayed to see this video of a mother of #Faridabad!
Heights of carelessness, insensitivity and irresponsibility.
You have no right to risk your child’s life. pic.twitter.com/uNj362e9UO

The video, shot from a building opposite the tower where the woman and her family live, shows the girl standing on the railing of a ninth-floor balcony that was reportedly locked. The boy is seen holding one end of the sari while his mother and an old woman, who appears to be his grandmother, slowly lift him up the other.

The video then zooms out to show the height at which the boy is hanging and the person recording it says that the boy would not survive if his hands slipped.

IPS officer Dipanshu Kabra, who shared the video on Twitter, called the woman’s act “the height of carelessness, insensitivity and irresponsibility.”

The boy’s mother, it was learned, has repented of her action that risked her son’s life.

Parveen Saraswat, a resident of the same society, has told the media that the incident took place on February 6. He said the woman did not contact anyone in the building for help in retrieving clothes that had fallen on the locked floor. below. Instead, she made the dangerous decision to hang her son from a sari, drop him downstairs and then yank him backwards, the society resident said, adding that the apartment complex management sent a notice. to the woman to explain the problem. Act.