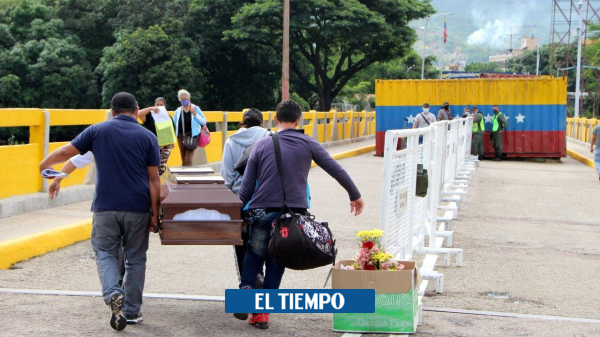 Gustavo Petro’s victory raises hopes among Venezuelan businessmen and unions, Its representatives believe that an important phase is opening up that will pave the way for fruitful business relationships, especially commercial ones.

This Wednesday Colombia’s elected president wrote on Twitter that he had spoken to the Venezuelan government to reach an agreement On the restoration of relations at the border.

(You may be interested in: Guaidó or Maduro, who will be invited to the inauguration of the Petro?,

For the Federation of Chambers and Association of Commerce and Production of Venezuela (Fedecamaras), the activity at the border has already started to be active and therefore should be the same at the national level.

We are moderately enthusiastic. Colombia having a new president with the profile of Gustavo Petro will facilitate the issue of rebuilding relations

Fedcameras President Carlos Fernandez, in a conversation with EL TIEMPO, stressed that trust is one of the first things that must be taken again among the business community in order to move forward, so expectations are rising.

“It has created a positive expectation. We have been called to create a common destiny. We believe that one of the fastest things to do is to resume consular relations,” Fernandez emphasized.

Binational trade was an important source of income for Venezuela, At its best, it reached about $7,300,000, recalled Luis Alberto Russi, president of the Venezuelan-Colombian Chamber of Economic Integration (Cavecol).

“We are moderate enthusiasts. Having a new president in Colombia with the profile of Gustavo Petro will facilitate the issue of rebuilding relations. We believe that we should have a broader agenda that is through a mutual security agreement. be from.”

The Russian regretted that due to the deterioration of relations, border closures and the economic crisis, Colombian companies have been closed in Venezuela, of which there is no record of how many exist. In Cavecol, Avianca, Alpina and Mazda converge to name a few located in Colombia.

Currently, at least 10 of the 87 companies that make Cavecol are from New Granada. The Russians agree with Fernandez from Fedcamaras, emphasizing that trust is key to restoring trade and reviewing existing agreements, such as the Partial Scope Agreement No. 28, which was signed by the two countries.

The airlines’ interest in business expectation is added. For example, Wingo requested Colombian Civil Aeronautics to reactivate flights to Venezuela with a frequency of seven weekly flights.