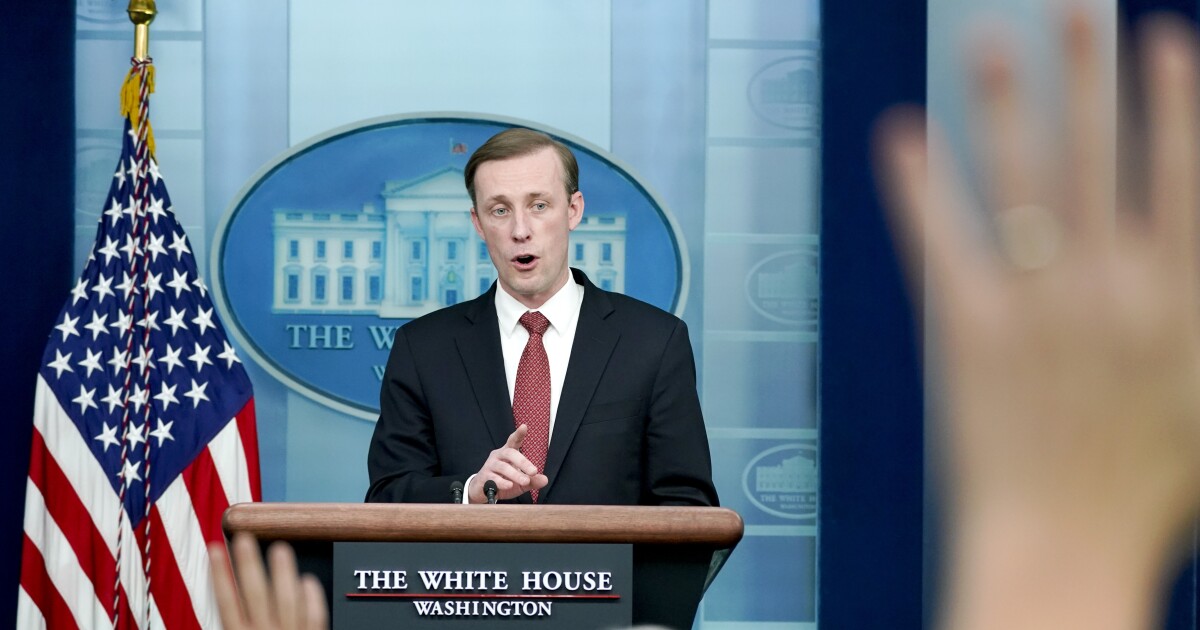 Warning that Russia “has all the forces it needs” to launch an invasion of Ukraine, a top Biden administration official Friday urged Americans in the country to leave immediately ahead of a possible war that could start within days.

Although he would not elaborate on the new intelligence, Sullivan declared that an attack “could begin during the Olympics.” Previously, American intelligence officials believed Russian President Vladimir Putin would wait until the Games concluded Feb. 20 before beginning a military assault.

The dire comments echoed those by Secretary of State Antony J. Blinken earlier in the day from Melbourne, Australiawhere he was meeting with his counterparts from major Indo-Pacific allies on ways to shore up defenses aimed at slowing China’s domination of the region.

US officials “continue to see very troubling signs of Russian escalation,” Blinken said. “We’re in a window when an invasion could begin at any time — and, to be clear, that includes during the Olympics.”

The White House said President Biden is scheduled to speak to Putin this weekend. An official administration said Russia proposed that the call take place Monday, but agreed to a counterproposal for the conversation to take place Saturday.

It will be the first time the two leaders have spoken since late December. They spoke twice that month, first by videoconference and then by phone. Officials from both sides met last month in Geneva. In recent days, Putin has met with other European leaders, including French President Emmanuel Macron and Germany’s new chancellor, Olaf Scholz, as a host of NATO allies have tried to dissuade Putin from starting a war.

Scholz met on Monday with Biden at the White House, where the president vowed that an invasion would mean the end of the Nord Stream 2 gas pipeline between Russia and Germany. The pipeline is not yet operational but could give Russia more leverage over Europe by increasing its control of the continent’s energy supply.

Sullivan would not comment on a news report that US intelligence officials believe Putin has given Russian military officials the green light to invade, just that the decision was up to Putin, as it has been all along.

“We are ready either way,” Sullivan said, adding that Moscow’s buildup of more than 100,000 troops on Ukraine’s border with Russia had strengthened the NATO alliance, leaving it “more cohesive, more purposeful, more dynamic than in any time in recent memory. ”

In the east, Russian-backed separatists began military drills involving artillery, tank and armored vehicles, according to Ukraine’s military. The mobilization was the final piece in an almost total Russian-led chokehold of the country.

Aside from the separatists and units stationed in Transnistria, just over the border from the southern Ukrainian city of Odessa, Russian troops are massed on Ukraine’s eastern and northeastern frontiers, and on its 674-mile border with Belarus.

Russia has also assembled a formidable force in the Black Sea, bringing in six warships and a submarine, as part of naval drills there and in the Sea of ​​Azov.

Ukrainian officials have been engaged in a furious bout of diplomacy to shore up the country’s position in case of attack. Ukrainian Foreign Minister Dmytro Kuleba said that a call with Blinken centered on efforts to counter Russian threats, including support to Ukraine’s economy.

“Russia must have no doubt: Ukraine and its partners are ready for decisive actions to protect our country,” Kuleba tweeted. He also spoke with the European Union’s top diplomat, Josep Borrell Fontelles, regarding a “package of heavy sanctions.”

At the White House, Sullivan issued a stark warning to Americans who might be in Ukraine, urging them to leave “in the next 48 hours” ahead of a potential aerial assault by Russia that could block departure points, including airports.

He added that, unlike in Afghanistan last year after the country fell more quickly than expected to the Taliban, there would not be an airlift to rescue stranded US citizens and visa holders.

The administration’s alarmist outward posture about Ukraine is a marked shift from its approach to the situation in Afghanistan before it was overrun by the Taliban. In the weeks before Kabul fell, Biden scoffed at the possibility of the government’s swift collapse.

Sullivan also clarified that the US forces under NATO command are taking part in an effort to defend members of the alliance and would not be “going to war with Russia.” He said the economic sanctions that NATO members are ready to impose on Russia upon an invasion would be severe.

“If Russia proceeds, its long-term power and influence will be diminished,” Sullivan said. “It will face massive pressure on its economy and export controls that will erode its defense industrial base, and it will face a wave of condemnation from around the world.”

When a reporter noted the Bush administration’s opacity about the faulty intelligence assessments it used in 2003 to justify the war in Iraq, and pressed him to disclose more of the shifting intelligence he’d cited, Sullivan drew a distinction.

In this case, he said, the intelligence he referenced was being shared with the aim of preventing a war, not starting one. And, unlike the erroneous claims of evidence of Saddam Hussein’s weapons of mass destruction, Putin’s preparations for war are “out in the open.”

Putin had hoped that his steady buildup of forces on Ukraine’s borders would compel the North Atlantic Treaty Organization to give him a guarantee that Ukraine, a former Soviet republic, would never be granted NATO membership.

Putin, a former KGB official, has long been agitated by Ukraine’s independence from Russia and the prospect of it aligning itself more closely with the rest of Europe. His annexation of Crimea from Ukraine in 2014 drew global condemnation and economic sanctions from the West, but the punishment has not seemed to deter him from contemplating another invasion.

The US and other NATO members are privately reluctant to admit Ukraine, which under the alliance’s Article V would make the organization responsible for guaranteeing its military defense. But thus far NATO leaders have held firm in their refusal to give Putin such a guarantee, even though it could avert an armed conflict, stating that the decision will be up to Ukraine and NATO members, not dictated by Moscow.

Throughout their talks with their Russian counterparts, Biden administration officials said that Putin’s avowed security concerns about his country’s much smaller neighbor and his demands from NATO are merely a pretext for an eventual invasion. Sullivan reiterated that point Friday, warning reporters to be aware of “a false flag operation, something that they generate and try to blame on the Ukrainians as a trigger for military action.”

In Ukraine on Friday, residents of Odessa, the nation’s main gateway to the Black Sea, expressed little urgency, despite the White House statements.

Though the city would probably be a primary target for any invasion, and the Russian army is across its border in nearby Transnistria, people roamed the streets, enjoying the late-morning sun and sipping lattes before ambling to the Odessa Food Market in the city center .

Nearby, a shooting range advertised with an LED sign and a bull’s-eye drew a few regulars.

“In the summer, you would need two days to reserve a spot,” said Gennady, the operator of the shooting range, who gave his first name for reasons of privacy. He stood before an array of posters featuring weapons, ranging from an old-time Mosin-Nagant rifle to a futuristic-looking assault rifle straight out of a video game.

Business hadn’t increased at the range in recent days, he said; the usual customers were still coming, of course, but there hadn’t been an uptick in those seeking to learn to shoot ahead of a presumed Russian attack.

“People who want to learn, they’ll learn. Those who don’t, it won’t matter the situation,” he said. In any case, he added, there was no lack of people with their own private weapons.

It was a point echoed by Alexander Dobrazhansky, a farmer living in a small village. Dobrazhansky, a onetime brand manager who had abandoned that career to make artisanal products, had no plans to run away.

“Here is what makes me calm,” he said, walking back to his shed and emerging with a well-used rifle with a scope attached.

“Even if we’re not talking about a regular army, or national guard, or security services, we have half a million veterans in the area who know how and who to kill,” he said, pausing to smile before the “who. ” “So there’s no fear.”

Stokols reported from Washington, Bulos from Odessa and Wilkinson from Melbourne.