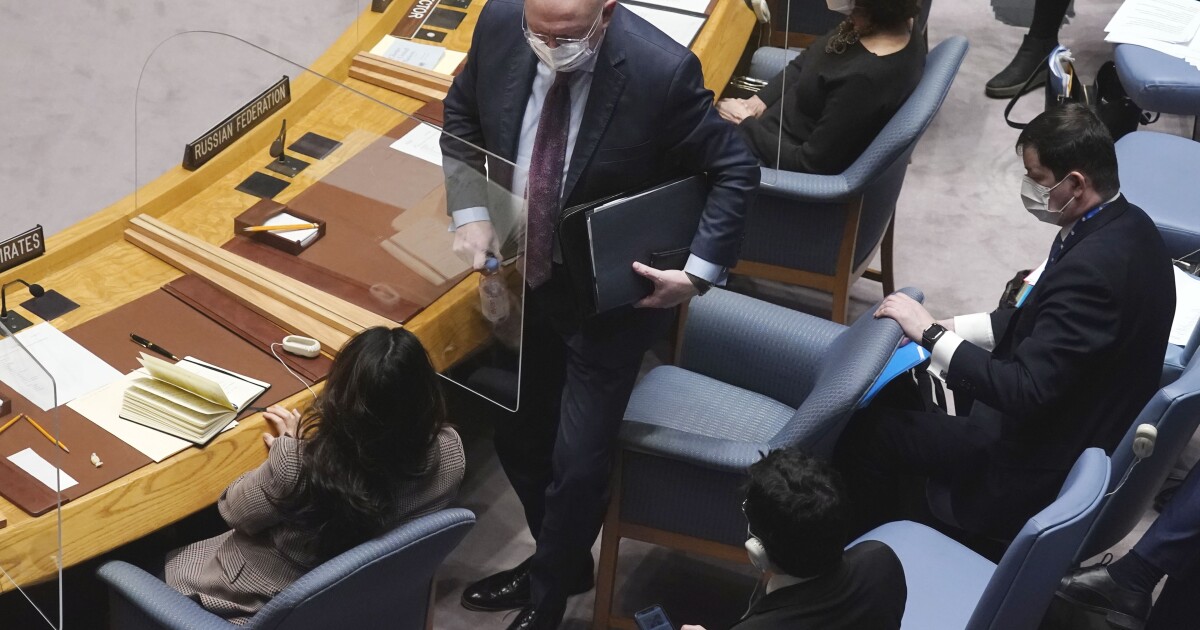 A stormy, angry session of the United Nations’ highest body on Monday heightened deep global rifts and raised new accusations about the Russian troop buildup around Ukrainewith the American and Russian sides harshly accusing each other of escalating the conflict.

The United States, backed by most Western countries on the 15-nation UN Security Council, requested the meeting and quickly came into bitter confrontation with Russia, backed by China. Russia accused Washington and its Western allies of “whipping up hysteria” and contended that Moscow had no aim to again invade Ukraine.

Linda Thomas-Greenfield, US ambassador to the UN, characterized the crisis over the former Soviet republic as dangerous for Europe and the United Nations.

“Russia’s aggression today not only threatens Ukraine,” she told the assembly. “It also threatens Europe. It threatens the international order this body is charged with upholding.”

Thomas-Greenfield revealed that in addition to the more than 100,000 forces that Russia has amassed along its border with eastern Ukraine, Moscow has begun to deploy what will amount to some 30,000 troops, armed with ballistic missiles and heavy weaponry, into Russian ally Belarus — just two hours north of Kyiv, the capital of Ukraine.

That information, State Department officials said later, is based on US intelligence reports but the officials would not publicly elaborate. While Russia has confirmed moving troops into Belarus for drills, the number that Thomas-Greenfield gave was higher than previously mentioned.

“What would it mean for the world if former empires had a license to start reclaiming territory by force? This would set us down a dangerous path,” Thomas-Greenfield said. Her use of the term “former empire” might have been a dig at Russian President Vladimir Putin, for whom he reestablishing his nation as a Soviet-style power is said to be the dream that motivates many of his actions from him.

Russia quickly, and angrily, denied the report of thousands of troops pouring into Belarus.

The Biden administration is “whipping up tensions and rhetoric and provoking escalation,” said Vassily Nebenzia, the Russian ambassador to the UN

“There is no proof” that Moscow is planning aggressive military action, Nebenzia said, turning to Thomas-Greenfield. “You are almost calling for this, you want it to happen, you are waiting for it to happen.”

Nebenzia also condemned the US over a 2014 popular revolt in Ukraine against a pro-Russia president who finally fled the country. US support led to the installation of “true Nazis, radicals and Russophobes” in the Kyiv government, Nebenzia said. Russia portrays the protests and political upheaval of 2014 as an illegal, anti-Moscow coup.

After all the Security Council members gave statements, the American and Russian envoys asked to retake the floor, where they continued sparring.

“The provocations are from Russia, not from us,” said Thomas-Greenfield, who contended that she could not let Nebenzia’s falsehoods go unchallenged.

The Russian criticized what he said was Washington’s refusal to look at past years of Moscow’s diplomacy involving Ukraine, such as 2014 protocols meant to establish a cease-fire with Russia-backed separatists who seized parts of Ukraine’s eastern Donbas region. But the rebels remain in the area and continue to battle Ukrainian government forces.

Then Nebenzia said he had a scheduling conflict and walked out — just before the Ukrainian ambassador spoke as the council’s invitee.

The acrimonious Security Council session wasn’t expected to produce a resolution or even a joint statement, but it was a chance to portray unity among allies supporting Ukraine and the search for a diplomatic path to ease tensions. It followed several weeks of intense meetings of officials from the United States, Russia, Ukraine and most of Europe.

Another such effort happens Tuesday when US Secretary of State Antony J. Blinken will speak by telephone with Russian Foreign Minister Sergei Lavrov. They will discuss US responses to Russian demands, and Moscow’s reaction to them. Russia submitted written responses to Washington on Monday, according to a US official who spoke on condition of anonymity to discuss the diplomatic efforts.

But US officials all but admit that many of the diplomatic steps underway are empty motions until Putin weighs in. “His response from him is the response that matters the most to us,” State Department spokesman Ned Price said Monday.

The Biden administration, seconded by the United Kingdom, is planning to levy harsh sanctions against Russia if it invades Ukraine, as it did in 2014 when it illegally annexed the Crimean peninsula. This time, US officials say, the punishments will hit the pocketbooks of Putin’s closest oligarch cronies and possibly the president himself, and rather than be ratcheted gradually will go full-bore from the start.

“We have developed specific sanctions packages for both Russian elites and their family members if Russia further invades Ukraine,” White House Press Secretary Jen Psaki said Monday. “The individuals we’ve identified are in or near the inner circle of the Kremlin and play a role in government decision-making, or at a minimum complicit in the Kremlin’s destabilizing behavior.”

She said many of the targets were “particularly vulnerable” because of deep financial ties with the West. Some of the sanctions being considered would bar targeted Russian people and entities from international banking systems.

Washington sanctioned senior Russian figures after the 2014 invasion, including the heads of some of the country’s largest oil and minerals firms, all tightly allied with Putin. Nothing has forced Putin to back down.

At the start of the Security Council session, Nebenzia argued against opening the meeting to public view, saying airing the proceedings only played into the West’s “propaganda.” Thomas-Greenfield scribbled notes furiously as he spoke. “This is not about antics; this is not about rhetoric,” she shot back.

Ten countries voted to open the meeting, and two wanted it held in secret: Russia and China. Three in the 15-country group abstained.

Washington in the last month has increased military aid to Ukraine, including antitank weapons. The Pentagon warned Friday that Russia had built up the resources to fully invade Ukraine.

The US has urged its citizens to leave Ukraine and has removed some diplomats and their families.

Ukrainian President Volodymyr Zelensky has pushed back against these measures. He is keen to have US and Western military support and urged sanctions be slapped on Moscow before any invasion, but he fears sowing panic among Ukraine’s citizens. Reports from Kyiv said authorities there on Monday arrested pro-Russia operatives planning violent demonstrations to undermine the government’s stability, another purported tactic used by Putin.