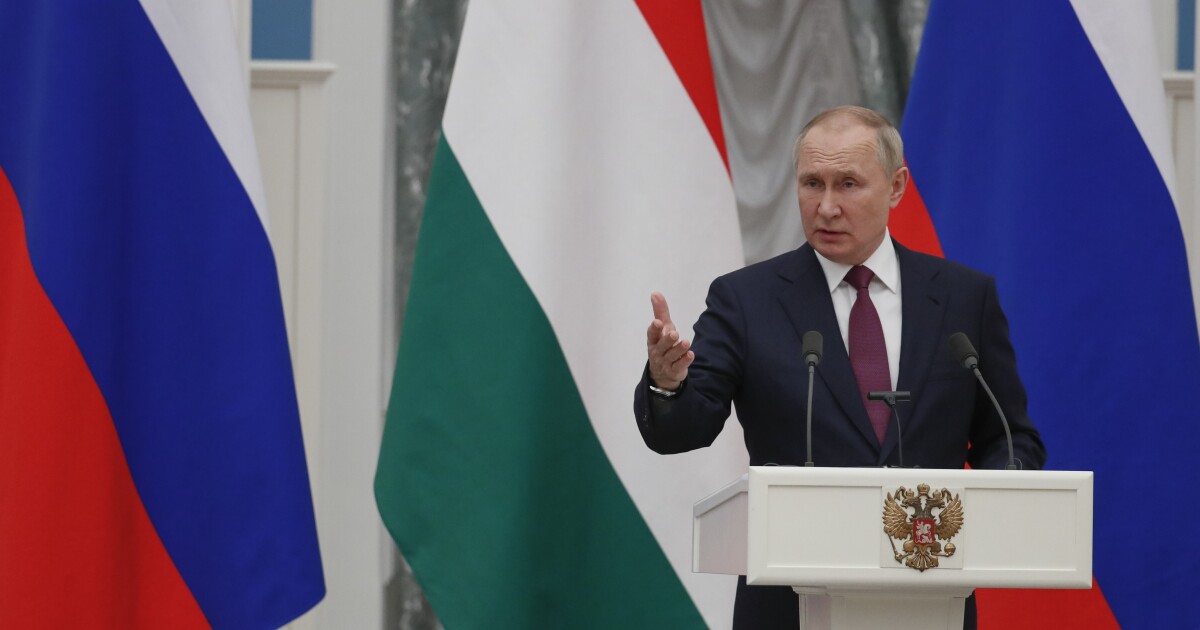 Russian President Vladimir Putin on Tuesday accused the United States and its allies of ignoring Moscow’s security proposalswhile Ukraine’s President Volodymyr Zelensky called on the West to take tougher measures to stop a Russian invasion of his country.

The rhetorical volleys from Moscow and Kyiv came against a backdrop of intensifying diplomatic activity aimed at staving off a Russian military move into Ukraine, the neighbor it invaded eight years ago. Although more than 100,000 Russian troops are massed on Ukraine’s borderPutin faulted the West for causing tensions, depicting a deliberate attempt to goad Moscow into making a military move.

“Ukraine itself is just an instrument to achieve this goal,” the Russian leader said. “This can be done in different ways, by drawing us into some kind of armed conflict” that would trigger harsh western sanctions againstRussia.

The Kremlin, Putin said, was still weighing written responses from Washington and NATO over his demands that NATO rule out ever allowing Ukraine to join the alliance — a scenario that would almost certainly be years away, if it happened at all — and that it restrict alliance activities in eastern Europe.

“But it is already clear that Russia’s fundamental concerns have been ignored,” he said. “NATO refers to the right of countries to choose freely, but you can’t strengthen someone’s security at others’ expense.”

At the same time, the Russian president said he still hoped for a diplomatic resolution to the standoff. “I hope that we will eventually find a solution, although we realize that it’s not going to be easy,” he said.

In Kyiv, Zelensky praised allied backing for Ukraine, but suggested the West should do more to dissuade Putin from any aggression, rather than waiting until after the fact to punish Moscow. At a side-by-side news conference with visiting British Prime Minister Boris Johnson, Zelensky said the two discussed deterrence.

“Prevention is better than treatment,” the Ukrainian president said. He said a pullback of Russian troops massed near Ukraine would be “the only true answer to a question: whether Russia is going to continue the escalation or not.”

Zelensky has made a concerted effort to play down the likelihood of a Russian re-invasion, suggesting in recent days that Western warnings of an imminent threat were overly alarmist. Johnson, though, portrayed Putin as “holding a gun to Ukraine’s head,” saying there was a “clear and present danger” of a Russian attack.

Were that to happen, Johnson said, Russian troops would face “very, very fierce and bloody resistance” from Ukrainian forces.

Ukraine is far outmatched by Russia militarily, but on Tuesday, Zelensky signed a decree expanding the army by 100,000 service members over the next three years, which would bring its troop total to 350,000. The country’s military posture has changed considerably since 2014, when Russia seized Ukraine’s Crimean Peninsula without a fight, and fostered a separatist rebellion in Ukraine’s east, a simmering conflict that has killed 14,000 people.

Earlier Tuesday, Secretary of State Antony J. Blinken spoke by phone with his Russian counterpart, Foreign Minister Sergei Lavrov. Echoing a pattern of previous US-Russian talks — and coming a day after an acrimonious US-Russia showdown at the UN Security Council — the session did not appear to produce any breakthroughs.

State Department spokesman Ned Price said Blinken “further reiterated the US commitment to Ukraine’s sovereignty and territorial integrity, as well as the right of all countries to determine their own foreign policy and alliances.”

Blinken also repeated warnings of “swift and severe consequences” if Russia were to move against Ukraine. And the administration again conveyed mistrust of Russian protests that Moscow had no intentions of renewed aggression.

“We continue to hear those assurances that Russia is not planning to invade, but certainly every action we see says otherwise with the continued buildup of troops and heavy weapons moving to the border,” said a senior State Department official, briefing reporters on condition of anonymity to characterize sensitive discussions.

In the meantime, Putin appeared to relish the chance to highlight any sign of tensions among Western allies. Hungary’s Prime Minister Viktor Orban, who is considered the most Russia-friendly leader in Europe although his country is a NATO member, traveled to Moscow on Tuesday for talks with Putin. Appearing by Putin’s side at a joint news conference, Orban urged de-escalation.

Other Western leaders have sought to telegraph solidarity with Ukraine by visiting Kyiv. Among them was the Polish prime minister, Mateusz Morawiecki, who met with his Ukrainian counterpart Denys Shmyhal, and pledged humanitarian aid as well as arms supplies to Ukraine.

And I have expressed sympathy over Ukraine’s plight.

“Living close to a neighbor like Russia,” he said, “we have the feeling of living at the foot of a volcano.”

Hoaxes reported from Kyiv and King from Washington. Times staff writer Tracy Wilkinson in Washington contributed to this report.