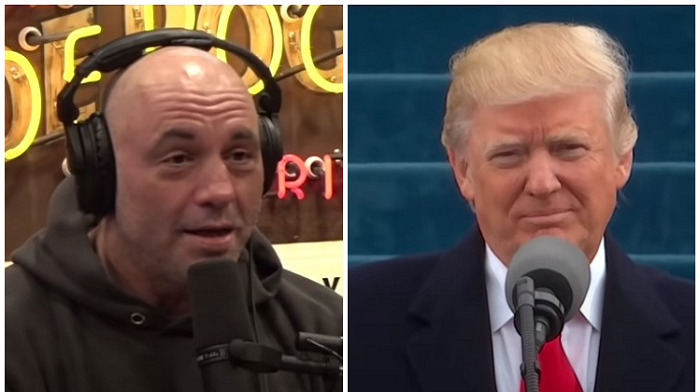 Table Of Contents hide
1. Support conservative voices!
1.1. Sign up to receive the latest political news, information and comments sent directly to your inbox.
2. Joe Rogan and cancel culture
3. DeSantis agrees.
4. Like this:

Rogan has been the subject of controversy ever since a handful of aging music stars past their prime began demanding that he be removed from spotify due to alleged COVID misinformation.

He landed further in some hot water when a video surfaced of Rogan using the “n-word” in previous podcasts.

Despite the compilation video missing a certain level of context (Rogan has been a comedian for quite some time and most have comedic license when it comes to saying offensive things), the breadth of his use of the reprehensible slur led to an apology.

Rogan called the video “the most unfortunate and embarrassing thing” he’s ever had to talk about, adding, “I’ve clearly screwed up.”

It would be Rogan’s second apology since the Spotify furor began.

Just over a week ago, Rogan apologized to Spotify and boycotting musicians, and offered to make concessions to the angry mob.

Joe Rogan apologizes for resurfaced podcast clips of him using the N-word.

RELATED: Joe Rogan uploads video of his COVID announcement to accuse CNN of ‘fake news’ about his version

president trump issued a statement on Monday night imploring Joe Rogan to stop apologizing to the roused crowd, noting that it would never be enough for those who want to see it cancelled.

“Joe Rogan is an interesting and popular guy, but he needs to stop apologizing to the maniacs and lunatics of fake news and the radical left,” he said.

Rogan is by no means a fan of Trump, since I call it “Fucking dangerous” after the Capitol riots and calling for an investigation into the events of that day.

“How many ways can you say you’re sorry?” Trump wondered. “Joe, do what you do so well and don’t let them make you look weak and scared. That’s not you and never will be!”

Support @joerogan or it will only be a matter of time before the elite of the left come after you or your loved ones for not complying with their wishes.

In an interview with foxnewsDeSantis slammed the liberal media, explaining that Joe Rogan’s apology will only make the cancel culture mob come after him more fervently.

No, he shouldn’t have apologized. I mean, do you see what happens? The mob will come after people, and they’re targeting Rogan because he’s threatening to dump the apple cart on some of the things they hold dear,” he said.

DeSantis also noted that the initial objections were over ‘COVID misinformation’ when in reality Rogan was simply setting up discussions with opposing viewpoints, something truly impartial media outlets should consider.

“And with COVID, it just brings opposing viewpoints. He is letting the people decide,” the Republican governor said. They say it’s against [the vaccine]. I don’t listen to his program, but then I read that he specifically advocated for people with comorbidities and the elderly to get vaccinated.”

DeSantis went on to suggest that the left-wing media wants to destroy Rogan because of his popularity.

Rogan himself has said that one outlet in particular, CNN, is taking a hit because more popular people like him are starting to call them out for ‘fake news.’

CNN took him to task for using what they defined simply as a “horse dewormer,” which Rogan got the network’s chief medical correspondent, Dr. Sanjay Gupta, to admit was something they should never have said.

“When you’re saying something,” Rogan replied, “and then the person you’re saying it about has literally ten times more audience than you, you dumb son of a bitch…”

“Do you know what you did? You just proved my point.”

The liberal media and the cancel-culture mob have proven the point of Trump and DeSantis time and time again. They won’t stop. In fact, they are even more motivated once you start apologizing.