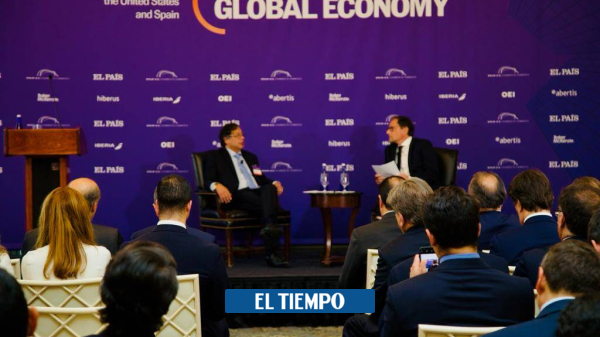 The President Gustav Petro culminated on Wednesday night a hectic agenda in New YorkWhere did you arrive last Sunday? And he ended with a dinner to which he was invited, along with other leaders, by the president of the United States, Joe Biden.

You may be interested in: Gustavo Petro: ‘The drug trafficking proletariat can negotiate with justice’
​
It was his first international outing in which the topics he addressed revolved mainly around the failure of the fight against drugs, climate change and, therefore, the defense of the Amazon jungle.

The president’s agenda began yesterday with a working meeting with the members of the Americas Society/Council of the Americas, he had bilateral meetings, he took part in the forum ‘Latin America, the US and Spain in the global economy’ and in the Climate Champions Forum.

Precisely when speaking at the ‘Latin America, USA and Spain’ forum, he said that although today his government has more room for manoeuvre, he admitted that it will not last long.

He added that he has managed to change the language of polarization and considered it one of the important facts.

“The simple fact of interviewing Uribewith certain figures who are from the opposition, but who had been governing the country, took away that pugnacity from Colombian politics, at least for the next few months,” Petro said.

The president also stressed yesterday that “the drug trafficking proletariat is increasingly aware that it is playing the role of a fool”, because “now they put the dead and the wealth is left out”, for which “they are realizing that a probable path is to negotiate with justice”.

Regarding the possibility that this Monday he will meet with President Nicolás Maduro at the opening of the border, he said that “this is not on the agenda at this time.”

Petro also reiterated that he intends to “take the dialogue with the United States to a different axis, which is the issue of the climate crisis, and hence the importance of the Amazon rainforest.”

Regarding the negotiations with the ELN, he said that he is trying to “restart the process at the point where former President Santos left it and re-establish some protocols, the guarantor countries and continue” where it was suspended.

Speaking at the ‘Forum on Resilience and the Race to Zero’, he spoke about the climate crisis, a decarbonised economy and the need to shift towards clean energy.

At the close of this edition, the president participated in the private dinner invited by Biden. Petro plans to return to Colombia around noon today.

Also: Interview with Rodrigo Londoño, president of the Comunes party