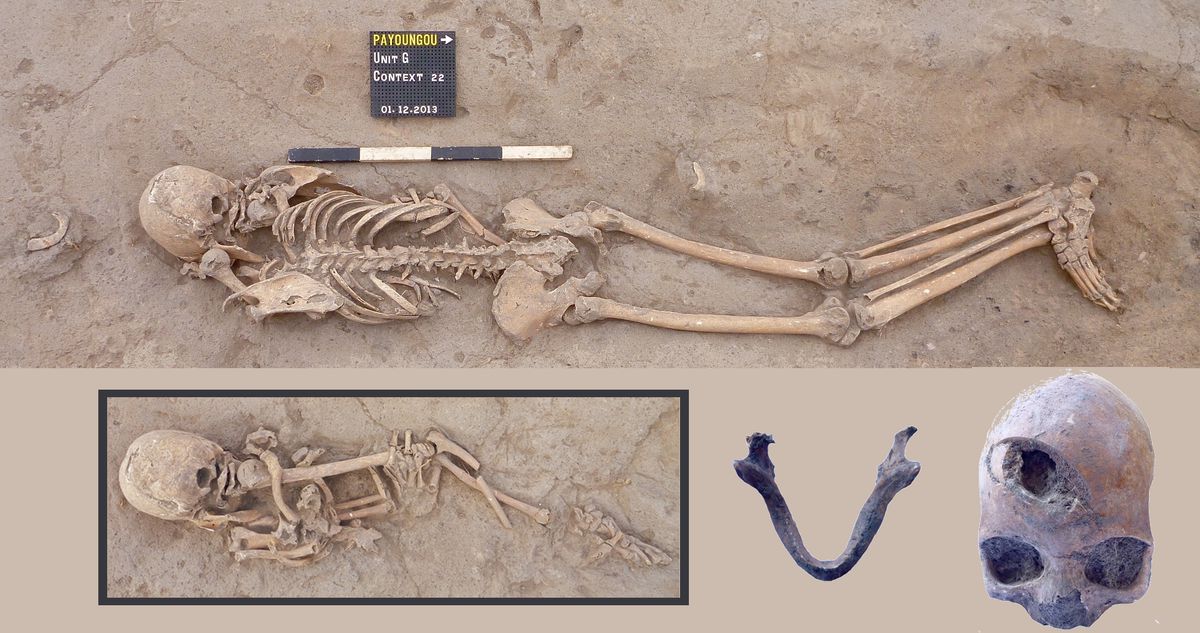 
necklace beads, pipe pieces, ceramics, Venetian glass and Bohemian glass, a cologne bottle, brass ornaments, rifle bullets, lava from smelting furnaces, animal bones, a clay bowl and a dog Skulls and even skeletal remains are also included. A traitor was put to death. All these remains found in recent years are rewriting the history of the South SenegalDiscoveries that speak of battles and the rise and fall of kings and great empires, but also of commercial exchanges, rich and poor, ancient trade, vast mobility and A pre-colonial Africa more complex and linked to the rest of the world by many ideas,

year 2013. Spanish archaeologist Sirio Canos, a researcher at the Institute for Heritage Sciences of the High Council for Scientific Research (CSIC), and his Senegalese colleague Thierry Balde excavated near the tata (fort) of Payongou, one of the first capitals of the world. African Empire of Kabu. Suddenly, they stumble upon a human skull. They stop work and go to ask the village elders. The “general”, one of them tells him, “traitors and horses were buried in that area”. To the surprise of the archaeologists, the man offers them a simple explanation: “Because traitors were less than people and horses were more than animals.” The body showed all the signs of being beaten to death by a man over 50 years of age with arthritis and then face down and bound arms and legs, as oral tradition indicated did to the traitors went.

“The old man had heard the story from his parents, but the details he had given us were confirmed when we excavated the remains. They told us that those who had revealed a secret to the enemy had to do so for mysterious reasons. and those remains showed trauma to the ribs, arms, collarbone and spine, as well as a strong blow to the forehead. Killed him. It was as if the old man was present during his execution. It was,” recalls Balde. Archeology came to confirm the stories of oral tradition. Canos reveals, “The residents of the city were happy because we were bringing to light what their grandparents had told us, “Physical findings combined with stories are what I call polyphonic stories.

The Upper Casamance region in southern Senegal has been home to important centers of power for the past millennium. However, until now it was ignored by archeology due to lack of financial resources for research, distance from the capital, existence of conflict in the area since the 1980s or the lack of glamor of its ancient clay constructions. , For this reason, when Thierry Balde received a call from Sirio Canos to invite him to work with him on the first excavations, he felt a strange satisfaction. “First because I’m from here, from Kolda, and second because I’m an archaeologist. That void had to be filled,” he says. The campaigns are financed by the Marie-Skolodowska Curie program of the European Commission and by the CSIC itself.

The Spanish archaeologist established as the object of his doctoral thesis the Mandingo kingdom of Cubba, which originated in the 13th century. Mali Empire And that, over the decades, it gained autonomy until it became an independent political entity in the 17th century. Located on an area that today includes parts of The Gambia, Senegal and Guinea-Bissau, its decline stems from internal problems and a Peel rebellion in the 19th century. Kabu is then replaced by the Fuladi state, which coexists with the colonial period and ends up under the domination of European colonists. Certainly this last state attracted Balde’s scientific interest during his university period.

It’s six o’clock in the morning. Dawn breaks out in Paraumba, located south of the Senegalese region of Kolda, with approximately 800 residents, towering trees and without electricity or running water. Before sunrise, there is a combination of the roar of a donkey and the roar of a rooster. Six archeology students from the universities of Ziguinchor and Dakar, under the co-ordination of Canos, stretch. You have to get up early, then the heat gets hot. The group heads over the old Tata to the jowar farm, a square-shaped structure below ground that is identified by elders’ accounts and aerial photographs. In his previous documentation work, Sirio Canos traces an old French sketch that points to a famous battle that took place in 1894 between Moses Molo, king of Fuladi, and Bamang Dalla, sovereign of Paquis. As the oral tradition tells.

23-year-old Aminata Deep is the only student among the girls. “You have to leave orbit to search for the lives of our ancestors. The field work is hard, but it is fascinating. People look at us and wonder what these crazy people are digging into the ground,” he says. At first, Paraumba’s neighbors walk around and wonder if they are looking for treasure. After marking two specific points, they begin digging. Every centimeter of land is scoured and the first quest The morning sun is already hitting hard, but they resume their work after breakfast in the shade of the mango tree.

The first jobs were fruitful in 2013. In an area of ​​70 to 50 km with a high concentration of historical terrain, dozens of interviews were conducted and surface material was collected. As a result of this previous investigation, in which 34 settlements and a dozen tatas were identified, two sites were chosen: Payongou, one of the first capitals of the Kabu Empire, and Korop, which was once the center of power in Phuladi. “In the first of them we were able to attest more than 1,400 years of occupation, dating from the 7th century onwards, with the presence of ceramic and iron foundries. In the 13th century there is a change in the type of pottery, which becomes more diverse”, coinciding with the creation of the Mali Empire, “in the second, the occupation is for at least a thousand years, until the 19th , reveals Canoes.

These societies were divided into classes. The nobles inhabited the royal territory, which can be attested by the remains of animals they ate more often, and by the coveted objects found. However, one of the most surprising features of deposits in the region, uncovered in the work of Canos and his Senegalese colleagues, is the shallow depth of the deposits, less than a meter excluding garbage pits. , and the brevity of individual occupations, less than 250 years. This created an obvious paradox: a region with the presence of large kingdoms and permanent cities according to historical texts, but at the same time an archaeological landscape that reveals great mobility, given its shallow depth.

The solution, according to the researchers, is what they call the “winding sedentary lifestyle” of these societies: “Cities and towns regularly move a few hundred meters, but retain community names, identities, and institutions,” explains Canos. . .. The reasons for these transfers were varied, he continues, from dampness, to the death of an important member of the community, through episodes involving spirits and bad luck. “It seems, therefore, that displacement does not follow a specific cause, but rather a mobility mindset, which is movement as a solution to any social or environmental problem.” Once again it was the stories that came to the rescue from generation to generation: this is how the ancients explained it to archaeologists, a pattern that fits perfectly with the archaeological evidence.

“The sources are diverse and range from past historical works and existing documentation to oral tradition. The words of the elders have helped us so much, you can’t do archeology in Haute Casmens without hearing them”, says Balde. For both researchers One of the most beautiful moments is right when they explain their findings to the community. “We always knew that Paraumba was an important city, that there was a big fight here. But now we have all this evidence,” says village head Keba Niyabali. “It is very thrilling. The oral tradition has its own logic and dynamics, but in one form or another it always confronts material with scientific evidence”, concludes Canos.