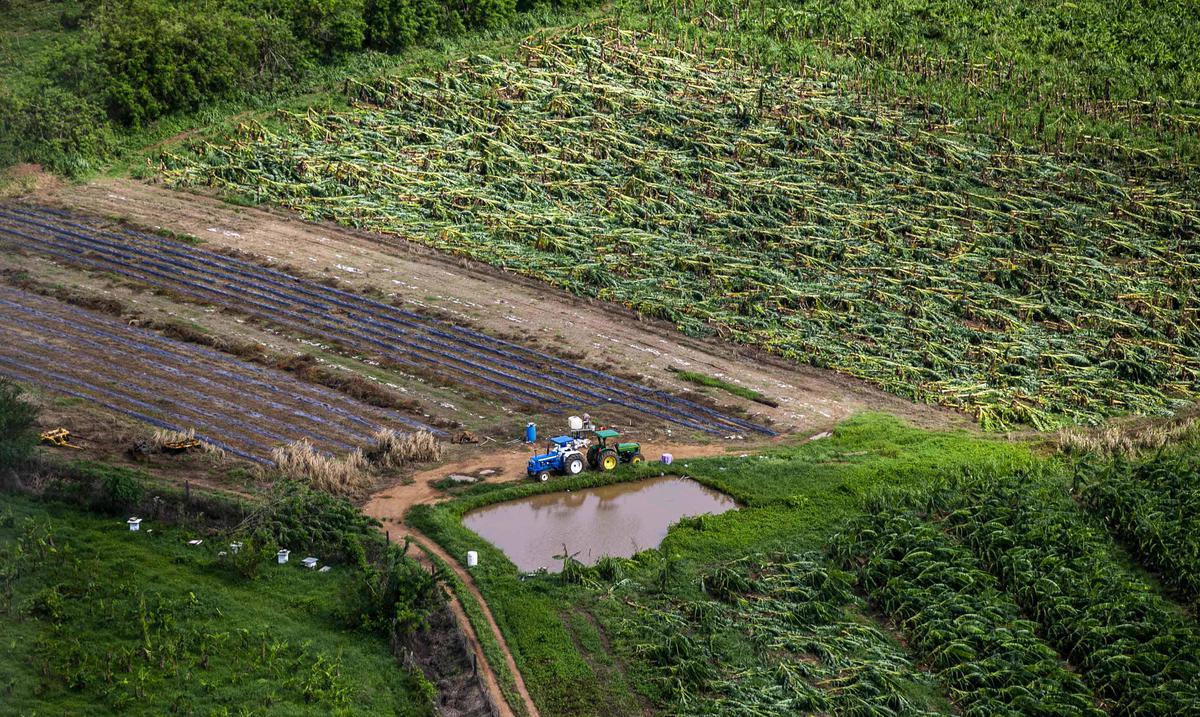 step of Hurricane Fiona will leave consequences for agriculture that can be compared with the events that followed Hurricane Maria in 2017. History is repeating itself for the farmers of the country.

“We can list these losses as equivalent to the damage left by the maria. Although we didn’t see the same wind, the amount of water from the fiona saturated the land and was enough to compare the effects of the winds as the plant lost its grip. He sat down and fell to the ground. “It had an effect on plants and bananas, as well as vegetables,” said Hector Cordero Toledo, president of the farmers’ union. “We have suffered the same loss.”

He anticipated that the level of loss in agriculture would increase once all farms had access.

“There are many areas where we have not been able to reach nor do we have any communication with farmers,” he said. “In the chicken field, we saw scenes where the litters of chicks that were going to become Tu Rico chickens for November and December drowned. One of the challenges we are facing now is the emotional health of the farmers.”

Farmer Davin Santiago de Jesus took to his social network to sell leftover bananas on his farm land in San Sebastian. The strategy worked and on Tuesday he was going to a restaurant in Ponce to sell 800 bananas. He estimates that once he starts sowing, he will be able to harvest his crop in a year and a half.

“I’ve already started it. I’m not going to back down. This is something the country needs. I’m 38 and I love it. With my dad, we help move the field forward.” doing,” he said.

to the secretary of Agriculture DepartmentRamón González Bero, Fiona’s agricultural losses would be significant, but would not exceed those reported during Hurricane Maria.

“I would not compare this incident to Maria, which was an incident that left us without electricity for a year in the mountains. We have seen power lines and poles mostly all over the place. The packing centers look good,” Most of the agricultural infrastructure is up there, he said.

He recognized the impact of these losses on the farmers.

“I have lost everything five times. It is difficult, but there is encouragement and desire and we have seen it”, he insisted.

Javier Lugo Rullan, Executive Director of the Agricultural Insurance Corporation, said that After Maria, an estimated $54 million in insurance was paid out by about 3,500 insured farmers., Presently the corporation represents about 5,000 farmers. a scholarly analysis of University of Puerto Rico Regarding Maria’s impact on agriculture, it is learned that coffee farmers bought insurance for only 41% of cuerdas and 48% of expected production. According to estimates from that agricultural sector, the loss of maria was estimated at 79% of cuerdas devoted to coffee cultivation and, after the disaster, the crop could have been reduced by up to 77%.

federal agriculture department It is estimated that Hurricane Maria destroyed 80% of the value of the crop, causing more than $780 million in damage.

With regard to the damage done to the agriculture sector after Fiona, the secretary has already inspected several coffee farms, some of which are also in Adjuntas. As they said, it would not be until later that they would be able to estimate the total cost of the loss.

“We have seen from sowing that one that was mature was lost, others that young trees were affected by wind and water flow. In coffee, it is too early to say what the loss is,” he explained. “In the milk sector, we disposed of 500,000 litres. They may not be able to process today (tomorrow) due to paucity of water. We are in touch with (PRASA) to see if it is possible for the water to reach the plants.”

“We have the means to communicate actively and that has helped us a lot in collecting data. Thank God we have good communication with Federal Agriculture and we have set up a team to support what we have requested,” the secretary said. “I’m going to send a letter to the federal Secretary of Agriculture to give him a summary of what has happened. We know what the vulnerabilities are and we expect help to arrive faster than Maria could.”

He recalled that after Maria, it took more than nine months for aid to arrive.