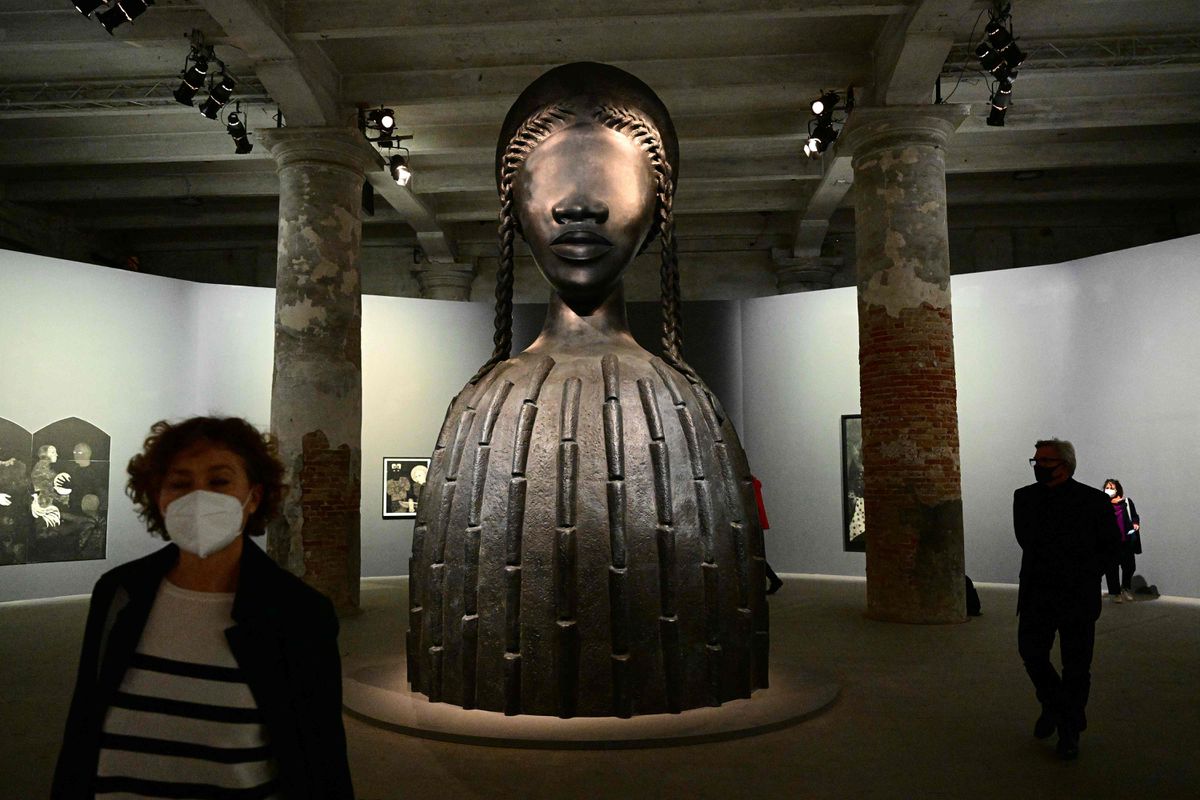 Table Of Contents hide
1. The radical (and political) minimalism of the Spanish pavilion
2. Exclusive content for subscribers
3. Like this:


There are other worlds but they are in this one. The famous quote from the surrealist poet Paul Éluard is the common thread running through the new edition of the Venice Biennale, which will open its doors to the public this Saturday, one year behind schedule due to the pandemic. The main exhibition of this biennial, which continues to be the most important event in contemporary art more than a century after its creation in 1895, proposes other futures for civilization at a time when crises overlap and call into question its very survival. . The Italian Commissioner Cecilia German, responsible for the artistic program of the High Line in New York, sets out some hypotheses to achieve a somewhat more prosperous future through the works of 213 artists from 58 countries, which account for all current debates. Half of them are dead and 90% are womenthe highest percentage in the history of a biennial that only managed to achieve parity in its 2019 edition.

It is not just a symbolic gesture. It also translates a desire to point out those women cornered in the canon as visionaries, more lucid when it comes to tracking down those possible worlds that are hidden in the one we already know, perhaps due to their own marginal status. Another aphorism of Éluard said that we live in oblivion of our metamorphoses. This is not the case with these artists, who anticipated almost everything that came later. At the head of that group is Eleanor Carrington, the British surrealist exiled in Mexico. The exhibition bears the title of one of her books, The Milk of Dreams (Milk of dreams), a set of stories about beings in permanent transformation, who coexist peacefully with animals and machines. That is the first of the chimeras that Venice aspires to outline. “I took the book as inspiration for an exhibition that wants to talk about the transformations of the present, about how our bodies change under the pressure of technology and the environment,” Alemani said at the beginning of his exhibition.

In the central pavilion of the Giardini, a sculpture by Katharina Fritsch welcomes the visitor. It represents a life-size elephant, only placed on a pedestal, as if he were a military leader from another time. The German, who will receive the Golden Lion of this edition together with the Chilean Cecilia Vicuna, defends that this pachyderm, which he carved in 1987, is as praiseworthy, if not more, than any man of power. In successive rooms other artists will appear who propose a similar investment of values. Vicuña presents an installation inspired by the Venetian lagoon, where pieces of rope, plastic and other marine debris hide an unexpected delicacy. The ugly becomes beautiful, as happens with the glass statues of the Romanian Andra Ursuta, which seem to have survived a nuclear catastrophe. Rosemarie Trockel turns the thickest of wools into a series of minimalist canvases, just like indian Mrinalini Mukherjee uses macramé to erect hanging sculptures, full of folds and cavities that refer to the female anatomy.

Alemani looks for the origin of these impossible hybrids in women linked to surrealism and finds some correspondences in current art. For example, Carrington herself to a lady of high society who turns into a bird, Dorothea Tanning portrays a female transformed into a plant and Varus remedies, one of the six Spanish artists in the show, to another who transforms into a cat. For her part, Jane Graverol, associated with the Belgian surrealist group, paints a woman with a machine skeleton decades before the theses on cyborgs from Donna Haraway or even Titanwinner of the last Palme d’Or. The tour continues with the vindication of occult practices and the inclusion of names such as Georgiana Houghton, pioneer of abstraction in the 19th century with his drawings guided by supposed divine forces, or Josefa Tolraa medium from Maresme who drew calligrams combining spiritism with Catholic heritage, traumatized by the death of her son in the Civil War.

For her part, the Danish Ovartaci painted anthropomorphic creatures while she was locked up in a sanatorium and created models of flying machines to be able to escape from this world towards a slightly better one. In reality, the show also functions as a cultural history of violence against women’s bodies. It goes through the representation of her in the art of the last decades, of the unhealthy stories that are usually the oil paintings of Paula Rego to the spectral portraits of Miriam Cahn or the fragmentary sculptures of Sara Enrico, Julia Philips or June Crespo, which may recall the surrealist trope of the dismembered woman.

In the other venue of the Venice Biennale, in the Arsenale of the Italian city, Alemani bets on a different way to face the future, much less daring than that of hybridity and transhumanism: the survival of the planet will necessarily pass through respect to the environment and its fragile balance, to reconnect with ancestral knowledge and traditions that colonialism almost managed to annihilate. This second section begins with a dialogue between a monumental sculpture of Simon Leigh with the works of the Cuban Belkis Ayonwhich share the same postcolonial imaginary, and continues with a long succession of works that update the traditions of naive art, the folk art or even the poor art. For the most part, they come from the non-Western world, such as the voodoo cloaks of the Haitian Myrlande Constant or the canvases made with electric cables by the Ethiopian Elias Sime.

Latin America is very well represented, thanks to the ceramics of the Argentine Gabriel Chaile, the female portraits in accordion format of the Chilean Sandra Vasquez de la Horra, a labyrinth of earth, tobacco and coffee by the Colombian Delcy Morelos or the monochrome oil paintings inspired by nature by the Brazilian Solange Pessoa. It all ends in a peculiar Garden of Earthly Delights signed by Precious Okoyomon, corrupted by the heritage of colonization and slavery. Although, just before, the show stops at the mutant sculpture represented by the Aliens by Marguerite Humeau, the revolving works of Monica Al Qadiri, inspired by the petrochemical industry, or the new works by Theresa Solar, in which colorful forms emerge from others that seemed inert, like chrysalises that insinuate that regeneration is not impossible, although it is not going to look anything like what we have known until now. There are other worlds, and perhaps the artists see them better.

The radical (and political) minimalism of the Spanish pavilion

The starting point for the Spanish pavilion in Venice is simple: rotate this brick building inaugurated in 1922 by ten degrees to align it with those of its neighbors in Belgium and the Netherlands. with your project CorrectionIgnasi Aballí has ​​created a parallel architecture inside the pavilion, in a slightly different shade of white, causing a conflict between past and present that results in a new hybrid and somewhat ominous space, only appeased by the Adriatic light that enters through the skylights.

This game of overlaps has a political interpretation —“the opposition between two ideologies, such as the one that is typical of the two Spains”, confirmed the curator Bea Espejo—, which Aballí did not deny yesterday, on a first day at the that his project aroused the interest of a major international gallery. It is a radical bet in two senses. “From the outset, it leaves almost empty a pavilion in a biennial that tends to be spectacular. I have the feeling that we are going very against the current”, Aballí maintained about the minimalism that her intervention gives off.

On the other hand, it advocates reinventing the obsolete spaces of these centennial pavilions, vestiges of a time when nationalism raged in Europe. Does it make sense to prolong the artistic competition between countries that is the Venice Biennale at a time when war has returned to the continent? Commissioner Cecilia Alemani says she is in favor of “not closing them, but using them intelligently, questioning the uncomfortable heritage of nation-states.” The Spanish pavilion is the best example of this line, as is a relatively similar architectural intervention by Maria Eichhorn, a representative of Germany, and the discourses critical of colonialism and slavery contained in the spaces of France, the United States or Mexico.