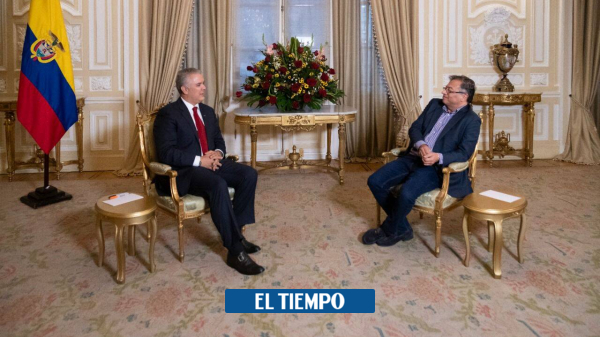 Table Of Contents hide
1. Restoration of the degraded ecosystems of the Canal del Dique
2. Renewal of the radio spectrum and magnifying glass on connectivity projects
3. Concession contracts for La Jagua and Calenturitas coal mines in Cesar
4. Extension of the term of the Board of Directors of Ecopetrol
5. The alleged embezzlement of money from Ocad-Paz
6. Eight investment projects in eastern Colombia
7. Negotiation of the FTA with the United Arab Emirates
8. The continuity of the Runt
9. Food security and nutrition
10. Like this:


Ten ‘early warnings’ were communicated by the team of the elect president, Gustavo Petro, to the group that represents the outgoing government, chaired by Iván Duque, through a letter.

The issues in question gravitate around the areas concerning the environment, technology and communications, mines and energy, the National Planning Department, international trade, transportation and food security.

(You may be interested: Challenges of the new Congress: tax reform, the most important project).

The letter was issued on July 14 by the liaison team of the incoming Executive (Daniel Rojas, Carolina Corcho, Aurora Vergara and Mauricio Lizcano) and was answered two days later by the liaison group about to leave (José Manuel Restrepo, Víctor Muñoz, Alejandra Botero and Maria Paula Correa).

Restoration of the degraded ecosystems of the Canal del Dique

“The outgoing Government is requested to suspend the schedule and adjudication process of the PPP-Megaproject River Route 5g ‘Restoration of the Degraded Ecosystems of the Canal Del Dique’ Until the communities are heard and the shortcomings referred to in this petition are adjusted, ”warned the message of the first alert communicated.

Related (The millionaire contract of the Canal del Dique)

Faced with this request, the response from the Iván Duque splice team indicated that, within the framework of article 39 of Law 1682 of 2013 and after two guardianship rulings, 16 consultation processes have been carried out with 13 community councils of the communities black and three indigenous communities.

“The project has an expected investment value (CAPEX + OPEX) close to 3.09 billion pesos […] and the generation of 60,075 jobs is estimated”, assured the response on the project that is planned to be developed for 15 years.

Renewal of the radio spectrum and magnifying glass on connectivity projects

The incoming splicing team stated that the Vice Ministry of Connectivity is going to renew the contracts for the use of the radio spectrum of Tigo and Telefónica for 20 years. According to them, it would be assigned on August 3 or 4.

In addition, this group mentioned that “there is a process within the Directorate of Infrastructure [de MinTIC] for more than $100 billion pesos for connectivity in San Andrés, which is planned to be awarded before August 7. Finally, an inspection contract was found within the Surveillance and Control Directorate for approx. $28 billion pesos”.

The reply by the outgoing group explained: “With these projects, supported by CONPES, the aim is to benefit 5,350 low-income households through Internet connectivity and the provision of community Internet access in 46 Digital Zones, for the low-income population. The total investment of the project is $116,439 million pesos, being $66,175 million for Amazonas, Guainía, Vaupés, and Vichada; and $50,263 million for the San Andrés y Providencia project. Of that amount, $2,152 million will be available for 2022: $713 million on the Orinoquía-Amazon border and $1,439 million in San Andrés and Providencia.”

In addition, he added that these processes are “framed in the rules of public procurement.”

Panorama of the Prodeco mine in La Jagua de Ibiríco, in Cesar.

The fourth alert issued stated: “The National Mining Agency (ANM), plans to carry out the Carbon Round in the coming days, in which it will deliver the La Jagua and Calenturitas coal mines, recently returned by the firm Prodeco, through a concession contract to various bidders. in the department of Cesar. It is considered that there are various aspects of the settlement of these contracts that have not been sufficiently clarified and that, therefore, this coal round should be suspended”.

On this subject, the response from the Iván Duque splice team argued that Prodeco’s mining contracts provide that, at the end of these, the work fronts “must be delivered in operating conditions.” That is, fit to continue mining.

Citing Law 685 of 2001, Decree-Law 4134 of 2011 and article 20 of Law 1753 of 2015, this same group expressed the opinion that, under the criteria of the current Government, the most favorable thing for the Nation is to “declare and define a strategic mining reserve area.

“In this sense, the coal mining round responds to the safeguarding of a contractual and legal duty of the mining authority,” he stated.

Extension of the term of the Board of Directors of Ecopetrol

In this matter, the reaction of those designated by Iván Duque recalled that in 2018 the period of the Board of Directors of this company was also extended from one to two years.

In this regard, they stated that the decision “is made taking into account international reference studies that include an analysis of the period of the members of the board of directors. These modifications are intended to improve the corporate governance practices of companies, they do not respond to electoral or political changes.

(Get informed: Karol González resigned from the election process for comptroller).

The alleged embezzlement of money from Ocad-Paz

Comptroller General of the Republic.

The sixth alert shared by the delegates of the incoming Government is related to the journalistic investigations that speak of an alleged embezzlement that, according to this group, “involves the National Planning Department (DNP) and the Comptroller General of the Republic in the allocation of the resources for peace through Ocad-Paz”.

“The priority of the national government is to guarantee transparency in the use of public resources, whatever their origin or destination. The DNP is a technical body that has been building tools to carry out its functions with the quality and suitability required and making the management of public resources visible to the citizenry”, responded the acting Executive representatives.

Also, they added that the DNP does not approve resources, but verifies that the requirements are met in the investment projects proposed by the territorial entities and that the entity technically advises the body, but does not make decisions.

“The incoming government is concerned that it be submitted for consideration by CONPES (CONPES Draft Declaration of Regional Strategic Importance of Investment Projects to Improve Competitiveness in the Llanos Region-Guaviare, Meta, Casanare and Guainía Departments), the declaration of strategic importance of 8 investment projects that will indebt and compromise the fiscal situation of the municipalities for 5 billion pesos, with support for oil royalties”pointed out the joint team of the next Executive.

The reply message sent by the outgoing group assured that what is stipulated in said document “is an opportunity for the target regions to leverage a sufficient amount of resources to achieve an impact of results in their territories, but with their own resources from their territories, which they are essentially royalties.”

Likewise, he reported that the amount of the eight projects amounts to 1,032 billion pesos.

(Can see: Oxygen Green, without representation in the new Congress).

Negotiation of the FTA with the United Arab Emirates

The eighth concern of the representatives of the elected Government is the negotiation “in record time” of the FTA (Free Trade Agreement) with the United Arab Emirates. According to this group, this agreement could “have a negative effect on some productive activities, especially due to issues of rules of origin.”

The response from the sector appointed by the current president detailed that these binational negotiations, according to them, have privileged the interests of Colombia and the productive sectors and related entities have been consulted.

According to what was announced by this group, the issues of the FTA are revolving around fertilizers, coffee, oils, sugar, paper, footwear, steel and vehicles, among others.

The continuity of the Runt

“The current RUT contract is extended until September 30, 2022, without the possibility of having more additions, since the percentage of 50% established in the law is exceeded —the outgoing Government extended the term until September 2022 based on a concept of the Council of State that established that the value of the contract obeys the initial value of process-. Faced with this situation, the incoming government must explore and make decisions immediately to guarantee the continuity of the service”, states the ninth alert.

In reference to this concern, the group of the current Executive asserted that the structuring of the new concession project did not take place between 2015 and 2018, so “the Ministry of Transport had to add the contract to have a sufficient period” to take the relevant actions.

Sale of food in Medellin.

The tenth and last “early warning” of the incoming and outgoing Government has to do with the approval that would be made in the coming days of a document from Conpes (National Council for Economic and Social Policy) that emphasizes food security and nutrition . In this case, the Petro joint team asked the Duque team not to sign the text until the new Executive reviews it and adjusts it to its program.

The response of the delegates of the current president indicated that this policy will be developed between 2022 and 2034, with an indicative budget of $2.84 billion pesos..

Similarly, they reported that this program began to be built 18 months ago with the support of the FAO (Food and Agriculture Organization of the United Nations), the WFP (World Food Program) and Fundación Éxito. “The document is under review by the Conpes group,” they pointed out.

Below are the full letters of the splice teams.