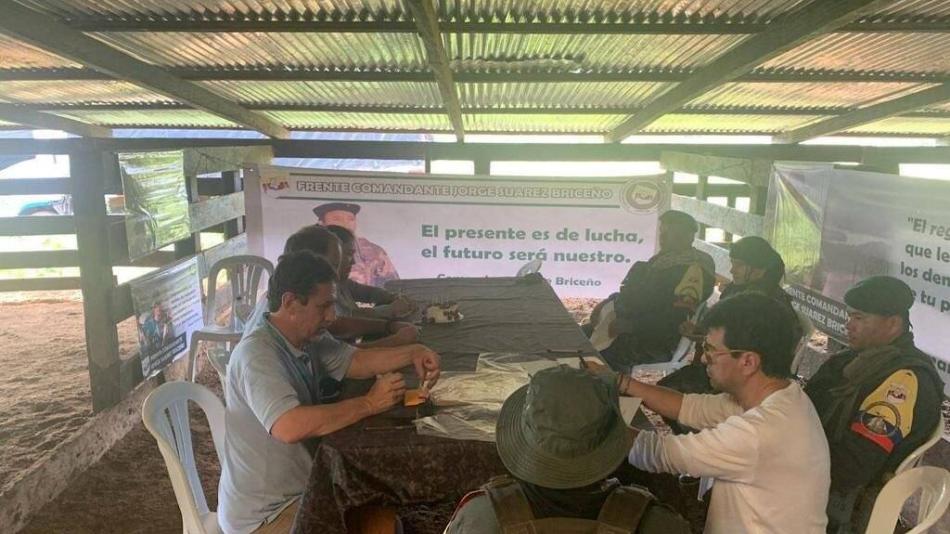 Table Of Contents hide
1. Reactions to dialogues with dissidents
2. Like this:


After the meeting with Danilo Rueda, high commissioner for peace of the Petro government, the armed group that presented itself as the “Central General Staff of the Revolutionary Armed Forces of Colombia, People’s Army, Farc-Ep” He harshly attacked former President Juan Manuel Santos and the Peace Agreement built in Havana and ratified at the Colón theater in Bogotá.

(In context: The debate that opened after the meeting between the Government and dissidents)

“The hosts of former President Santos forget that the signers of the Havana peace accords were never commanders because they never commanded, that our true commanders never demobilized,” they say in a statement.

For this organization, the fact that nearly 13,000 ex-combatants have laid down their arms and joined the Comunes party is a fallacy because, according to what they affirm, “the Santos government signed with the Demobilizing Current, not with 95% of the FARC-EP that we are of peasant origin”.

In the statement, this group harshly attacks those who have questioned opening a new negotiation with an organization with which a peace process has already been advanced.

“From there it follows that the grotesque thing that Sergio Jaramillo sees, the political scientist and social investigator who today occupies his chair in the Office of the High Commissioner for Peace, is that he does meet with the FARC that he fights.”

“Now, that Juan Fernando Cristo, within his failure as a political leader, rumors false percentages and has naively believed in the figures of demobilized persons of the agreement, only shows how far the government of Juan Manuel Santos was from knowing the FARC-EP .”, they assure.

(Can read: He is ‘Calarca’, the dissident drug trafficker who met with the Petro government)

“The rancid Bogotá oligarchy with its bishop satrap Humberto de la Calle and Roy the infiltrator, only wanted the insurgency’s rifles, not the implementation of what was agreed upon. And a Nobel Peace Prize winner whose toga reminds him from somewhere of his lavish life , who in Norway went up to receive him up a ladder splattered with the blood of Alfonso Cano and Jorge Briceño,” they add.

In their statement they also question the media.

“Consequently, and attending to the morbid headlines of the national newspapers, which do not know about the hunger of the poor; nor of the peasants who farm hanging on the slopes of the three mountain ranges; nor of those others who look from outside the fences at the cows of the rich, each with two hectares to graze, and he without even one to cultivate; the media that speak with the mouth of the Colombian bourgeoisie now flood their headlines with verbal diarrhea against the commanders who mark the guerrilla movement”.

In the statement they state that they hope that with these FARC-EP and with the Eln, the Petro government will make progress in peace.

The group signs as the authentic FARC-EP, after the meeting they had with Danilo Rueda, High Commissioner for Peace of the Gustavo Petro administration, who signed an official document that reads: “Exploratory meeting of the High Commissioner for Peace Office and four delegates of the Central General Staff (EMC) of the Revolutionary Armed Forces of Colombia, People’s Army-Farc Ep”.

Reactions to dialogues with dissidents

Faced with this point, those who signed the peace agreement on behalf of the Colombian State reacted with perplexity. Thus, for example, Senator Roy Barreras asked himself: “And then, who were the ones who made the enormous effort to lay down arms in the Colón Theater Agreement? Don’t they distort the legitimacy of the peace agreement with a single stroke of the pen in the exploratory and now public dialogues?

While the former peace commissioner Jaramillo, assured that he agrees with the use of all the appropriate means to subdue all the structures of organized crime, but he does not agree with the dialogues with the FARC dissidents.

“What does not seem reasonable to me and even seems grotesque to me is to begin to give political treatment to these organizations and formally classify them as insurgencies and end up politicizing organized crime, which I think is what is happening,” explained Jaramillo.

For his part, Juan Fernando Cristo, one of the defenders of the peace process with the FARC and champion of the Yes in the plebisciteHe said: “Total peace is a goal that deserves the support of all Colombians. But you can’t put all the illegal groups in the same bag. ‘Iván Márquez’ and all those who failed to comply with the agreement of the Teatro Colón must go to ordinary justice”.

While Humberto de la Calle, former head of the peace negotiating team in Cuba, assured that dissidents cannot be rewarded.

“Now it turns out that the implicit message is to reward those who failed to comply after signing and betraying their signature. It seems to me a terrible message for the hundreds of guerrillas who have been firmly complying with the Havana agreement, because they can say that perhaps it would have been preferable to fail to comply, use the trick, reopen the talks and that takes away the seriousness of the State”, pointed out the now senator of the Republic.

The meeting in the department of Caquetá between Rueda and those who now claim to be the FARC-EP has also generated international reactions.

Human Rights Watch, for example, considers that this guerrilla no longer exists in Colombia and what remains are “dissident and criminal” groups dedicated to the drug trafficking business.

(We suggest: Petro defends contacts with the dissident ‘Iván Márquez’)

“It is very worrying that the statement seems to suggest that a political negotiation process will be sought with this guerrilla, including initially a bilateral ceasefire, when the peace agreement was negotiated the rules were clear, those who did not comply or who did not accept , they were going to face the full weight of the law,” said Juan Pappier, a researcher with the Division for the Americas.