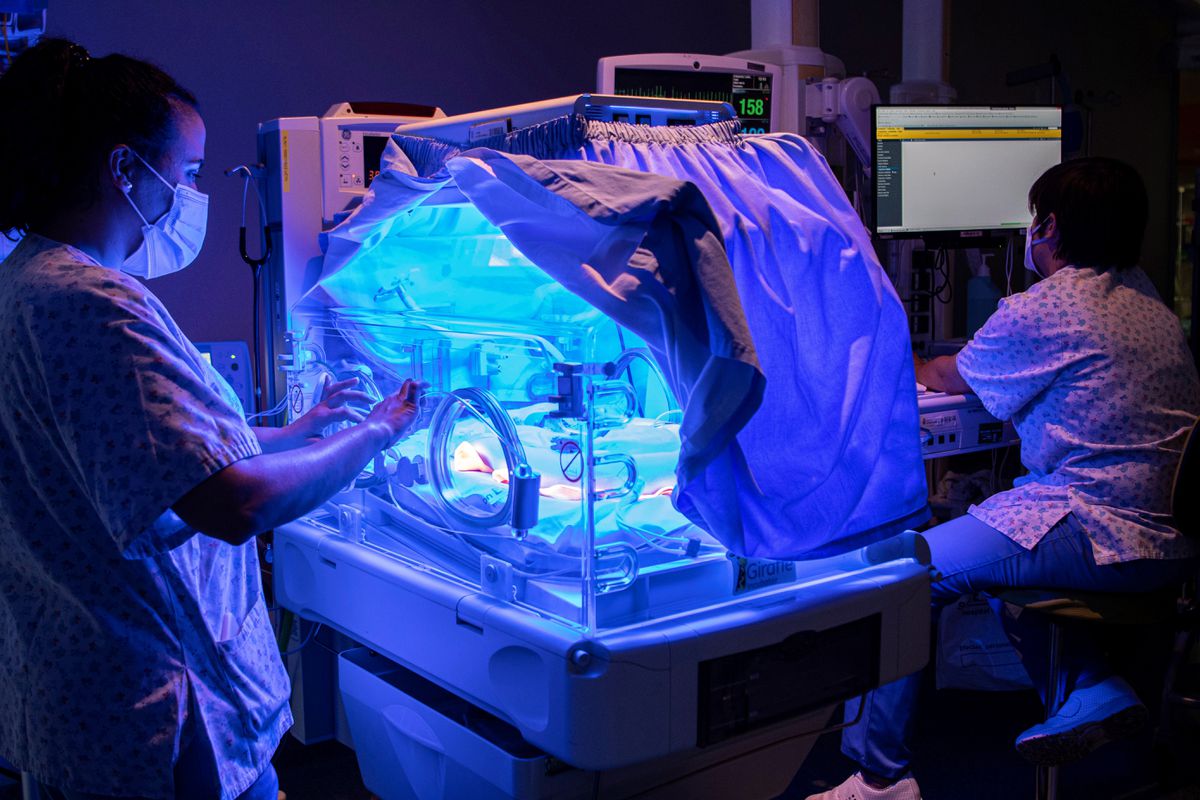 Spanish hospitals are suffering in recent days an avalanche of admissions of young children with breathing problems. The culprit is the respiratory syncytial virus (RSV), a pathogen that causes bronchiolitis—inflammation of the small lung tubes called bronchioles, less than a millimeter in diameter—and makes it difficult for air to reach the alveoli. The little ones affected by the most severe forms, most of them only a few months old, suffocate and the effort they make to get oxygen is evident in the force with which the skin sticks to their ribs when they breathe.

Although every year there is an epidemic peak of bronchiolitis in Spain, with some 100,000 cases and more than a thousand hospitalizations, experts and administrations point out that the current situation is extraordinary. The pandemic has changed the dates on which the RSV has made an appearance, the cases have risen a lot and before, and the evolution that the epidemic wave may have from now on with the arrival of the cold is unknown.

“It was a very predictable virus, but these changes add a lot of uncertainty to what could happen. The normal thing was that the incidence began to rise now and the peak was reached in mid-December. But we are already at very high levels, hospitals are suffering a lot of care pressure and we do not see signs that the cases may begin to drop ”, explains the pediatrician and epidemiologist Quique Bassat.

According to the latest report from the National Epidemiological Surveillance Network (RENAVE), the incidence of RSV infections in the week ending November 13 stood at 76 cases per 100,000 inhabitants, although the most affected group is precisely that of children up to four years old with an incidence 12 times higher than that of the rest of the population and the only age group in which it continued to grow. It is not possible to compare with previous years because the incidence of RSV has started to rise earlier than usual and there are no precedents. Although the document offers some encouraging data —it points out that “there is a decrease in the weekly incidence in primary care” and that “the hospitalization rate decreases”—, the truth is that practically all the communities and hospitals consulted state that the rate of hospitalizations continues to grow.

“We have pediatric ICUs in almost the entire country full, and cases continue to arrive at the emergency room. The last weekend has been especially worrying, with many admissions and hardly any free beds on the ward or in the ICU. We do not know when this trend will change. Before the pandemic there were some years with many cases, but we knew that with the Christmas holidays these were beginning to drop. The bad thing about this year is that we cannot trust the antecedents”, explains David Andina, member of the Spanish Society of Pediatric Emergencies (SEUP).

Communities and large hospitals have begun to take measures to deal with the situation. One of the most striking has been the one adopted by Aragón, which has decided to transfer the pediatric ICU from the Miguel Servet Hospital, with a capacity of six beds, to the neighboring General Hospital “in order to increase the number of beds”, according to a government spokesperson. regional. In its new location, the ICU has nine beds and, if necessary, the six that have remained in the first health center can be reopened.

The Sant Joan de Déu Hospital (Barcelona), whose activity is entirely for children, is treating some 400 patients a day in the emergency room, “mostly due to respiratory conditions, especially bronchiolitis”. The center, which has the 28 places in the ICU full, contemplates “the possibility of enabling spaces such as resuscitation” to accommodate new children who require intensive care, “but for now it has not been necessary,” explains a spokesperson. Also in Barcelona, ​​the Vall d’Hebron Hospital has 29 children admitted for bronchiolitis, “double the number last week”. And Sant Pau has doubled the places in the pediatric ICU, from 6 to 12.

Spokespersons for the communities of Castilla-La Mancha, Castilla y León, Andalusia, Extremadura, Murcia, Madrid, Navarra, Cantabria, Asturias, Catalonia and Galicia have confirmed to EL PAÍS the notable increase in cases and admissions for bronchiolitis, which has forced hospitals to prepare contingency plans in anticipation of what may happen in the coming weeks. A common measure is the reinforcement of the staff, the increase in beds on the floor and the creation of isolation zones, although for now no community has had to suspend surgical interventions or convert operating rooms or resuscitation areas into ICU areas.

Spain is not the only country affected by the sudden increase in cases of bronchiolitis in recent weeks. “It is a phenomenon that affects practically the entire northern hemisphere, with most of the countries having serious problems in their health systems,” says David Andina.

The latest weekly surveillance report from the European Center for Disease Control and Prevention (ECDC) shows the high circulation of RSV throughout the continent. And it highlights that countries like Portugal “continuously report a higher number of hospitalizations than expected attributable to RSV.” This phenomenon, which had already been pointed out by the United States public health agency (the CDC), is one of the unknowns to be resolved in the current increase in cases.

Several communities point out that they are observing more cases requiring hospital care among children up to four years of age. This means more age than usual, almost always during the first months of life in healthy children without other associated health problems.

“One hypothesis that would explain this is that the protection measures against the pandemic drastically dropped the circulation of viruses such as RSV, so there have been one or two years in which newborns have not come into contact with the virus. . It would be now, with this increase, when they would do so, which may explain some of these hospitalizations. But this is a logical explanation, which has not yet been demonstrated”, explains Quique Bassat.

This is not the first time, after the worst months of the pandemic, that RSV appears in months in which it was not common (the first cases in the current wave were registered at the end of summer). In the spring of 2021 there was already a first increase in cases that surprised the experts, at that time vigilant to the evolution of SARS-CoV-2.

“The irruption of the coronavirus and the measures adopted to deal with it have caused notable changes in the circulation of other pathogens. Now the unknown is what will happen. Most likely, in a while, they will return to the temporality they had before the pandemic, but we cannot be entirely sure, ”says Federico Martinón-Torres, head of the pediatric service at the Hospital de Santiago de Compostela.

This expert describes RSV as a “global health problem”. “Studies reveal that it is a virus that causes 100,000 deaths a year, almost always in lower-income countries that cannot offer children the life support they need. And it is also a virus that significantly affects those over 60 years of age, ”he adds.

There is no specific treatment that has been shown to be effective against RSV. People who suffer from them need care to help them breathe and avoid complications, which greatly reduces mortality. In recent years, several pharmaceutical companies have developed vaccines or monoclonal antibodies to prevent it, although for now none of them are used in Spain outside of clinical trials.

Arrested in Madrid a man who left his wife, sick with multiple sclerosis, to agonize to death for five days

Spain investigates strep A infections in children after UK alert

Carme Guil, magistrate: “Victims of gender violence must also be able to decide if they want to talk to their aggressors”

Icetex opens call to study in Hungary, China and Singapore