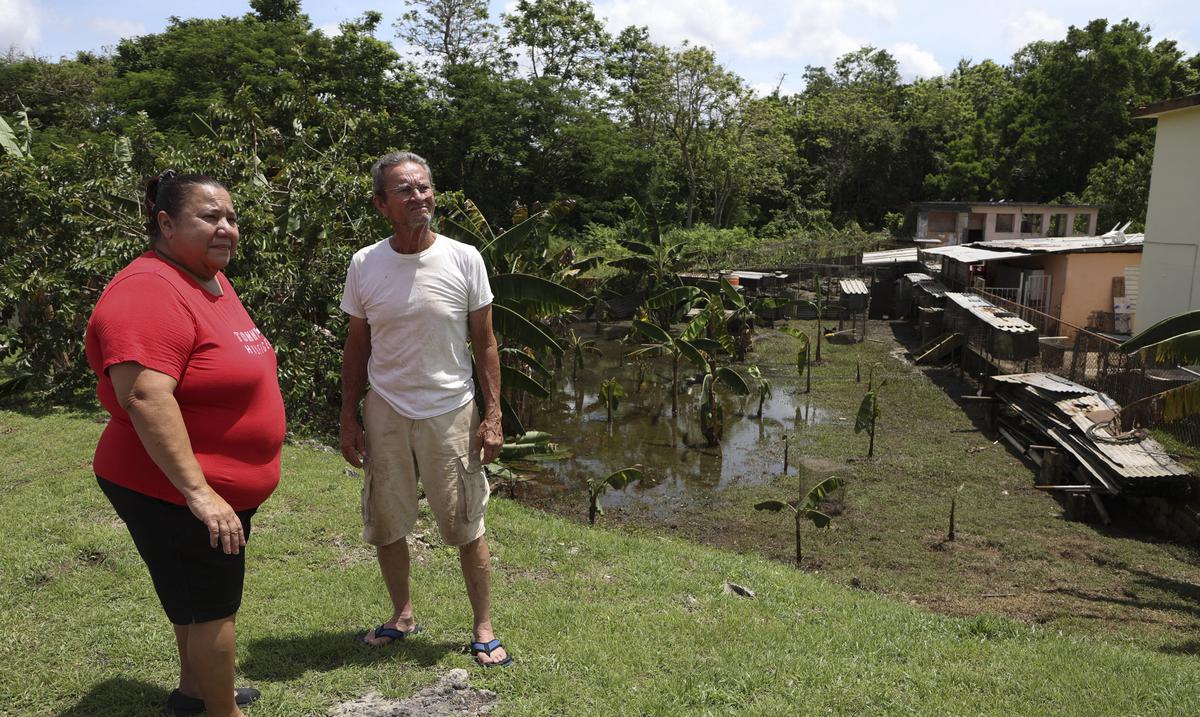 morovis- The people of the Barhona locality of Morovis have taken possession of the touching smell of dead animals, stagnant water and mud.which was under water due to heavy rain caused by Hurricane Fiona,

Six days after the crisis of the atmospheric phenomenon, many courtyards of houses that comprise the community in the mountainous region of the country are still filled with dead birds, floating fruit and stagnant vegetation in the water. What was green land until last week today, Friday, looks like small mangroves or lakes, judging by the amount of rain that fell in the area.

marriage of Michael Figueroa You Juanita MaldonadoResidents of the community for 35 years, are one of the most affected as they have most of the chickens, chickens and dead pigeons floating in the flooded courtyards of their residences and other homes.

Figueroa, 80, and a rooster caster told The Medium that he had lost about 80 birds located in the rezon and also the cages that ended up floating in the water. Their house has two floors and the water occupied a large part of the first floor, where the animals were.

The retired former government employee said that the chickens he was able to save were thanks to the fact that he brought them to another level of residence in sacks, while others were given to other artists. The ducks survived because they “swimmed”. Before the cyclone arrived, Figueroa took a portion of English chickens to a field in the yard, thinking they would be safe there, but the water drowned them.

“It was terrible. The same thing happened to Maria; the water burst over there (pointing to the surrounding land). Now our house is flooded. The water entered the whole courtyard. She killed the chicken. , all the tools left. I lost about 80 hens and chickens in total. I didn’t have time (to move them) because the water was awful. Houses were flooded and there were neighbors who had to leave. The patios are still full of water and there is a lot of pestilence. I want to remove the dead birds but I don’t dare to clean because there is still water“, Figueroa recounted, while his wife had warned him outright that he could not remove dead birds because of “mouse disease”, in reference to leptospirosis,

The 25 families affected by the floods in the area attribute the water pond to the cover of the sinkhole near the community. The couple reported that “many businesses in the area have built aside, dumped and moved the earth that covered them.”

“It was the construction of businesses that covered the sinkholes and the water had already started to go down as the mayor did the dredging,” said Maldonado, who is confident that in the future “they will try to uncover those sinkholes.” can fix.”

water and sewage authority (PRASA) on Thursday restored drinking water service for part of the community so that they can clean houses. With approximately 3,000 residents, the Barhona neighborhood is the largest in Morovis. The couple Figueroa and Maldonado cleaned a large part of their house except for the courtyard and the animal area.

95% of the municipality remains without electric service, Mayor Carmen Maldonado highlighted. In the morning hours, there was service to only one neighborhood, provided by lines connecting to Corozal.

Maldonado said that the employees of Luma Energy “He’s been reporting the same thing all week to activate everything, but nothing happens and we’re still in the dark.”

Water scarcity is the main concern of the first executive with respect to the needs of the municipality.

“The hardest thing is the lack of water and how do we get the tanker trucks to the communities, because with the shortage of diesel it is even worse because we depend on it to move the trucks. This is my biggest precaution right now. We are among the 70% of cities that are without water. We are carrying bottled water from door to door.

State highways that collapsed and were closed include PR-159, 145 and 617. In the case of PR-159, which connects Morovis to Corozal, two areas of the highway collapsed under sinkholes; The same situation was recorded on PR-145 and PR-617.

“FEMA authorized these state highways (for repairs) since Hurricane Maria, but (highway authorities) never participated in it and kept funding and pending projects because they never worked on them,” The mayor said.