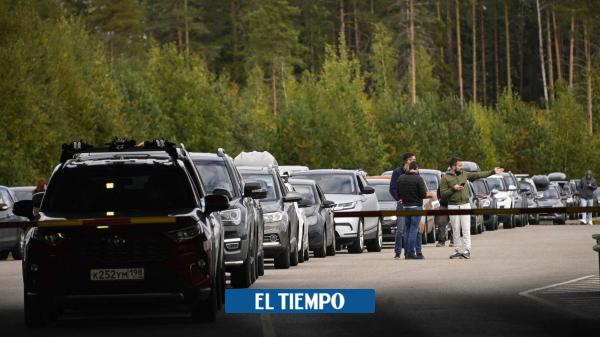 
In the arrivals area of ​​Yerevan airport in Armenia, stands Sergei, a man looking exhausted after fleeing Russia with his son for fear of being sent to the front lines in Ukraine. Like his compatriots, he says he doesn’t want to “die” in battle.

this is a 44 year old man One of thousands of Russians who have left their country since the invasion of Ukraine, A phenomenon that appears to have escalated since Wednesday when President Vladimir Putin announced a partial mobilization of reservists.

(Also read: What does Putin’s nuclear threat mean amid calls for peace at the UN?,

Officials said they would call 300,000 reservists, but many Russians fear a much larger mobilization. “Yes, we left Russia because of mobilization. (…) We decided not to wait for the army to be called in. We left,” he said on Thursday.

There are many Russians who have decided not to wait for military notification and are trying to leave the country. According to Google Trends, a tool that tracks search trends on Google, the frequency of questions like “leaving Russia” increased nearly 100 times after the mobilization was announced.

This Thursday, there were hardly any plane tickets left to countries where Russians don’t need visas, such as Armenia, Turkey or Azerbaijan and Central Asia, or if there are, they cost exorbitantly.

(You may be interested in: Confrontation between Russia and the United States at the United Nations Security Council,

Soldiers go for training to face the war.

That is why for many it remains only to leave Russia by car. Some neighboring countries reported an increase in queues or at least traffic this Thursday of Russian vehicles on its borders.

In neighboring Finland, arrivals of Russian citizens by road increased by 57% on the same day as Putin’s mobilization decree, the Finnish Border Guard reported on Thursday.

In Georgia, the situation is similar. “Witnesses told me that the queues stretched for about 40 kilometres,” said Victoria Platunova, a Russian refugee who has been there since the start of the military operation, who said her figures show the number of kilometers of vehicles to enter the Caucasian country. There are queues.

On the other hand, in Armenia, since the order of mobilization, the majority of those who arrived are men of fighting age.

(Too: Zelensky sent a strong message after Putin’s threat: he demands punishment from the world,

Arrested for protesting the mobilization of reservoirs in Russia.

But the Kremlin took the issue lightly on Thursday. Spokesman Dmitry Peskov said the news of the Russian escape was “very exaggerated”. Despite the fact that flights from Russia, very limited and expensive after Western sanctions, were still almost full to all destinations available.

Officials confirmed this Thursday that some 10,000 people in the ranks of the Russian military will be sent to Ukraine as part of the first day of mobilization, while many on social networks fear the borders will be closed. , which would deprive the Russians of leaving. , even from the ground.

For this reason Western countries have started giving asylum. German Justice Minister Marko Bushman said on Thursday that Russians fleeing their country were “welcome” to Germany, while Ukrainian President Volodymyr Zelensky urged Russians to “protest” against the mobilization of reservists or to “surrender” to Kyiv forces. urged.

international writing
*With information from AFP and EFE

Arrested in protest against Putin, will be forced to join Russian army

Putin: How did Ukraine’s counter-attack give rise to the Russian nuclear threat?

Russian Defense Minister announced that 300,000 reservists would be mobilized