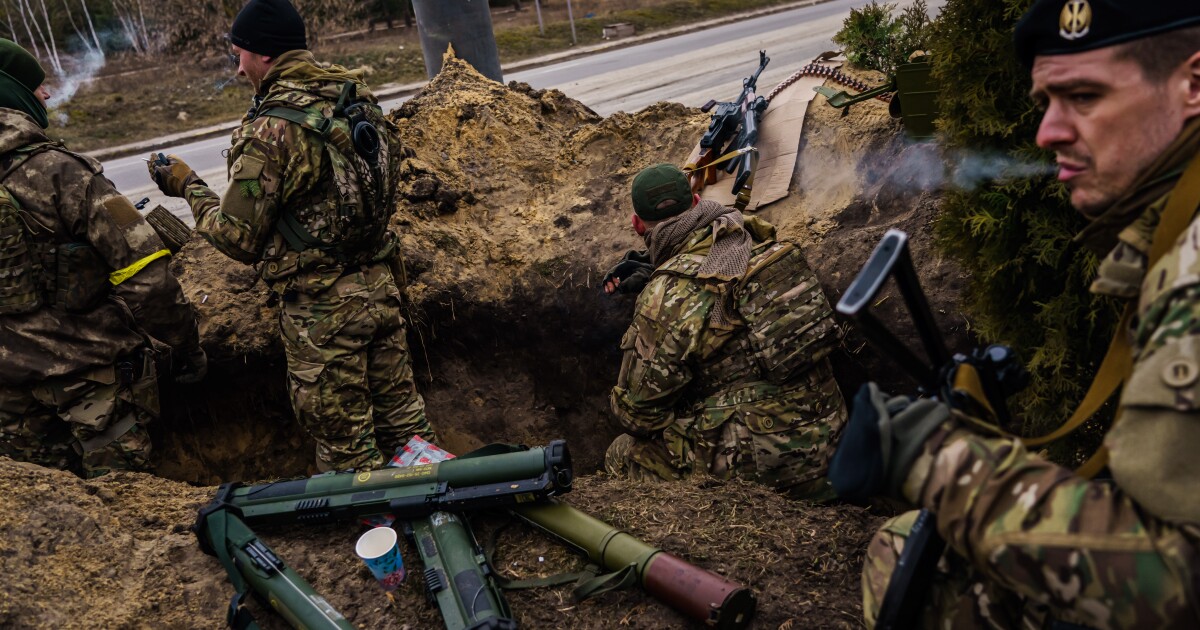 Russia announced a new cease-fire Monday to allow civilians to escape four Ukrainian beleaguered cities amid deep distrust that its forces will honor the pledge as they hammer strategic centers across the country.

Two previous cease-fires hardly got off the ground before Ukrainian officials said continued Russian shelling rendered them meaningless. Hundreds of thousands of Ukrainians remain trapped; some have died while trying to flee, including an entire family killed on a road in a Kyiv suburb, President Volodymyr Zelensky said, describing it Sunday as “a shooting gallery” for invading troops.

The new cease-fire announcement Monday applies to the capital, Kyiv; Ukraine’s second-most populous city, Kharkiv, which has come under sustained assault since the war began 12 days ago; Sumy in the northeast, near the Russian border; and the southern port city of Mariupol, which is essentially blocked.

But the fact that some of the allowed corridors would funnel refugees to Russia itself and to its ally Belarus — from which Russian troops rolled into northern Ukraine — offered scant assurance.

Almost all of the 1.7 million people who have escaped Ukraine in the last two weeks have gone west, to countries such as Poland and Hungary, in what the head of the United Nations’ refugee agency called the “fastest-growing refugee crisis in Europe since World War II.” The exodus amounts to almost 4% of Ukraine’s entire population — akin to about 12.7 million Americans fleeing the US

Taking over Mykolaiv has been a Russian objective for several days, as the city could serve as a key staging ground for a large-scale offensive against Odessa, which lies about 75 miles to the southwest and is Ukraine’s most vital access point to the Black Sea.

Senkevich accused Russian forces of deliberately targeting civilian apartment buildings, saying that overnight attacks had left wide swaths of the city without heat. I posted a video showing what looked like a residential building, its center blackened by a blazing fire presumably caused by a shell.

Emergency crews were at work restoring service, he said. But he warned that there was a lot of unexploded ordnance around the city and that residents should keep their distance until authorities could remove them.

Both the two failed cease-fires had included Mariupol, where officials say Russian pummeling has taken a grievous toll in human life and on key infrastructure, cutting off water, electricity and food and medical supplies. Nearly half the city’s 430,000 residents are trying to flee, according to one estimate, but only a small fraction have succeeded.

In Kharkiv, authorities said Monday that 209 people, more than half of them civilians, have been killed in the city since the invasion began.

The latest pledge from Moscow to allow people to escape Mariupol, Kharkiv and other areas followed a phone call Sunday between Russian President Vladimir Putin and French President Emmanuel Macron, who has spoken to Putin more than any other western leader in the last few weeks.

But Ukrainians are dubious of Russian promises.

“There can be no ‘green corridors’ because only the sick brain of the Russians decides when to start shooting and at whom,” Anton Gerashchenko, an advisor to the Ukrainian Interior Ministry, said on the Telegram messaging app.

Skepticism also hovers over a third round of talks between Ukraine and Russia scheduled for later Monday. Putin has repeatedly insisted that he would end hostilities only if Kyiv capitulates to all his demands from him, which include a renunciation of any intention to try to join NATO.

For his part, Zelensky has implored NATO to establish a no-fly zone over Ukraine and grown increasingly angry over its rebuff of his request, which the transatlantic alliance says could lead to a larger, even more catastrophic armed confrontation between the West and Russia.

In a video address Monday, Zelensky also called for an international boycott of Russian oil, one of Moscow’s most important sources of revenue.

“If the invasion continues and Russia does not abandon its plans against Ukraine, then we need a new sanctions package,” Zelensky said. “The international community must act even more decisively.”

On Sunday, House Speaker Nancy Pelosi (D-San Francisco) said US lawmakers were exploring such a ban. Heavy Western sanctions have already delivered a blow to Russia’s economywith the ruble plunging in value, multinational companies pulling out and the Moscow stock exchange all but frozen, and some US officials have called for more.

“We’re raising the cost on the Kremlin and all who aid and enable it for continuing this war of choice,” Secretary of State Antony J. Blinken said Monday during a visit to Lithuania, adding: “We want this to come to a stop as quickly as possible, which is why we’ll continue to increase pressure on Russia, continue to support Ukraine.”

Putin warned over the weekend that the West’s economic crackdown was close to a “declaration of war.”

He launched the incursion Feb. 24 baselessly claiming that Ukraine’s democratically elected leadership was a neo-Nazi cabal bent on wiping out ethnic Russians in the country’s east. On Monday, a spokesman for the Russian Defense Ministry told reporters that 2,396 “military infrastructure facilities” had been destroyed in Ukraine since the start of the “special operation” — Russia’s term for the invasion of its neighbor.

Moscow has acknowledged the deaths of nearly 500 Russian soldiers. But Ukraine’s Defense Ministry said Monday that the Russian army has lost more than 11,000 service personnel, more than 1,000 tanks and armored vehicles, and more than 100 aircraft and helicopters. The figures could not be independently verified.

The US estimates that 95% of the Russian forces had massed near Ukraine before the invasion are now in the country. Russia’s firepower and troop numbers are vastly superior to those of Ukraine, which has nonetheless put up determined resistance.

Blinken accused Russian troops of targeting civilians, an allegation Putin denies, although Russian forces and their proxies leveled cities during conflicts in Chechnya and Syria at the cost of thousands of lives.

The International Criminal Court in The Hague and the United Nations’ human rights agency have both opened investigations into Russian abuses in Ukraine.

More than 1.7 million people have left the country in the last two weeks, making it the “fastest-growing refugee crisis in Europe since World War II,” the head of the UN refugee agency said. That figure approaches 4% of Ukraine’s entire population — akin to about 12.7 million Americans fleeing the US

With the Kremlin in effect banning independent reporting on the war at home, many in Russia have accepted the government line on the invasion. But the war has not been without domestic opposition: Protests around the country Sunday, from Siberia to St. Petersburg, resulted in the arrests of more than 4,600 people, according to the rights group OVD-Info.

Hoaxes reported from Kyiv and Chu from London.