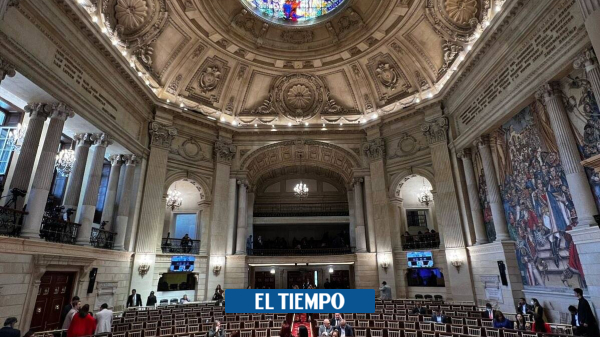 Table Of Contents hide
1. More Politics news
2. Like this:


After spending two months in the Senate of the Republic, Rodolfo Hernández announced that he will resign his seat in Congressto which he was entitled being the second with the highest number of votes in the last presidential elections.

(Can read: Rodolfo Hernández and the chaos in the League that he must fix before the regionals)

He stated that one of the reasons that led him to make that decision is that he never felt comfortable because, as he said, he is not a “parliamentary man.” But the compelling reason is that he does not want to be disqualified for the regional elections, since he has his sights set on the Government of Santander.

His short stay in the Legislature recalls cases of congressmen who did not last long in the Capitol and others who, on the contrary, have records of permanence.

(You can also read: Rodolfo Hernández: what about his seat? Analysis of his controversial resignation)

On the first stage, congressmen Alexandra Moreno Piraquive, Manuel Antonio Virgüez Piraquive and Carlos Alberto Baena López, all of them from the Independent Movement for Absolute Renewal (Mira), They were only legislating for three months.

The foregoing because they took office on March 16, 2018, 98 days before the term of Congress at that time ended. They came in to replace Sofía Alejandra Gaviria, from the Liberal Party; Teresita García Romero, from the Ciudadana Option party, and Honorio Henríquez, from the Democratic Centersince at that time the Council of State knocked down their elections and left them without their respective seats.

The three lost them because a court decision established that: “By complying with a guardianship that ordered the recount of votes, it was possible to prove an unfair decrease in the vote of the Mira Movement, whose cause was the use of markers that were not quick drying, which caused a double marking when folding the ballot, which made their votes null,” said the 700-page ruling.

Due to this situation, in 2014, the Mira Movement was close to losing its legal status because it only reached three seats in the House of Representatives. After that ruling, the period at that time ended with a bench of six congressmen.

On the other side are the parliamentarians who have spent several decades in Congress.

(In other news: Hint from Boric to Petro? He questioned the violation of rights in Venezuela)

The late Roberto Gerlein, who was active in the Conservative Party, He was in the Legislative for 50 years. He was first elected to Congress in 1968 and announced that he would not run again in 2018. He died at age 83 in December 2021.

Among the congressmen who are currently legislating, one of those who have been legislating the longest is Senator Efrain Jose Cepedaalso from conservatives. He has been elected for eight consecutive terms, that is, he has already completed 28 years in Congress.

The Barranquilla native began his passage through Congress on July 20, 1994. He reached more than 130,000 votes in this year’s legislative elections, is part of the Third Commission and is vice president of the Christian Democratic Organization of America.

– ‘We are going to march so that they withdraw the tax and political reforms’: spokesperson

– Petro explains his health mishaps: he said it was difficult for him to speak at the UN