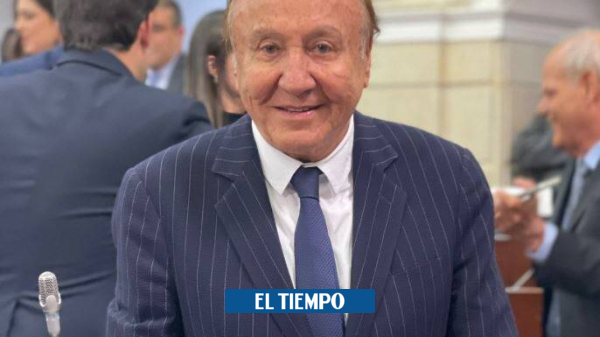 After two months and three days of being in the Congress of the Republic, the former presidential candidate Rodolfo Hernández, from the Anti-Corruption Governors League (League), confirmed that he will resign his seat in the Senate.

(Grass: Rodolfo Hernández: “I’m retiring because I feel like I’m stealing my salary”)

Hernández’s seat was special because it was obtained from the opposition statute. The norm says that the candidate and his formula that remain as the second option in the presidential elections will have the possibility of occupying a seat in the Senate and another in the Chamber and these will be the opposition to the Government.

This is how Hernández and Marelen Castillo, a former vice-presidential candidate, reached the Senate and the House, respectively.

Since his arrival in the legislature, Hernández himself hesitated to lead the opposition to Gustavo Petro. Even so, his party, the League, was formally registered with the National Electoral Council (CNE) as opposition.

However, this position before the Government has been welcomed with more encouragement by congressmen from the Democratic Center such as María Fernanda Cabal, Miguel Uribe Turbay or Paloma Valencia, who have promoted #SoyOpositor on social networks.

“I made what I could. I have participated, I have given an opinion on the bills where I feel I have the identity of adding value. I feel like I’m stealing my salary. I do not contribute what Colombians contribute fiscally in a salary as good as the one they pay here, ”she assured.

The new president of Congress, Roy Barreras, yesterday greeted former candidate Rodolfo Hernández, who will be in opposition to Gustavo Petro.

“The Colombian people chose to vote for the other option, and exercising the right to oppose, we accept the seat,” Hernández told the media.

He said that his training has taught him that “the most valuable thing is actions and not gossip.” He expressed that he feels in the Capitol as “Messi would feel like a goalkeeper, without being able to offer all my executive capacity to Colombians who demand real changes.”

In fact, a similar situation had already occurred before when Hernández was Councilor of Bucaramanga in 1994. After passing through this body, he concluded that for him the executive power is in charge, the Legislative branch is “innocuous.”

And his retirement caused controversy. “Rodolfo Hernández resigns from the Senate, abandoning a seat that supposedly represented more than 10 million people in Colombia. They were 2 months without pain or glory as a Congressman, “said the lawyer and analyst Daniel Briceño.

Rodolfo Hernández resigns from the Senate, abandoning a seat that supposedly represented more than 10 million people in Colombia.

For Andrés Segura, political analyst, “Rodolfo never felt comfortable in the Senate, it is not his profile, it is not the stage where he can develop his ideas. His style is not one of deliberation, but of execution”.

And the senator himself made it clear what he is betting on. “I withdraw to see if it is possible for Santander to accept me as its candidate for Mayor, one of the mayors of the department or Governor. So as not to disqualify me, because I have to resign. There I can provide a great service, ”he assured.

In this regard, Segura says that with this decision Hernández would be trying to collect the feelings of the 10 million citizens who voted for him with more freedom. “On the outside you can play on any topic and put the spotlight on it as many times as you want,” he said.

Regarding the vote he collected, the analyst assures that several of those votes were rejection of the current president Gustavo Petro, but that does not imply that a good part of the support went to him.

President-elect Gustavo Petro meets for the first time with Rodolfo Hernández after the elections.

“I doubt that it has the capacity to generate a national movement, but in the regional elections it will be able to position important figures in some sectors. He needs to be in force in that discussion and what he saw is that the scenario to be in force is not the Senate”, he affirms.

On the other hand, Gabriel Cifuentes, political analyst and professor at the Universidad del Norte, shared other considerations regarding Hernández’s departure from Congress. One of them is that his seat would not be replaced by anyone and this would be a “vacant seat.”

It is clear that the former mayor’s decision does not affect Representative Castillo.
And the criminal process that Hernández faces for the case of alleged corruption in vitalology, would remain in the ordinary justice.

Now we will have to wait to see how much strength the senator manages to accumulate for the next regional elections. In the last presidential elections in Santander he obtained 870 thousand votes.

At the close of this edition, the Senate had not filed the resignation.