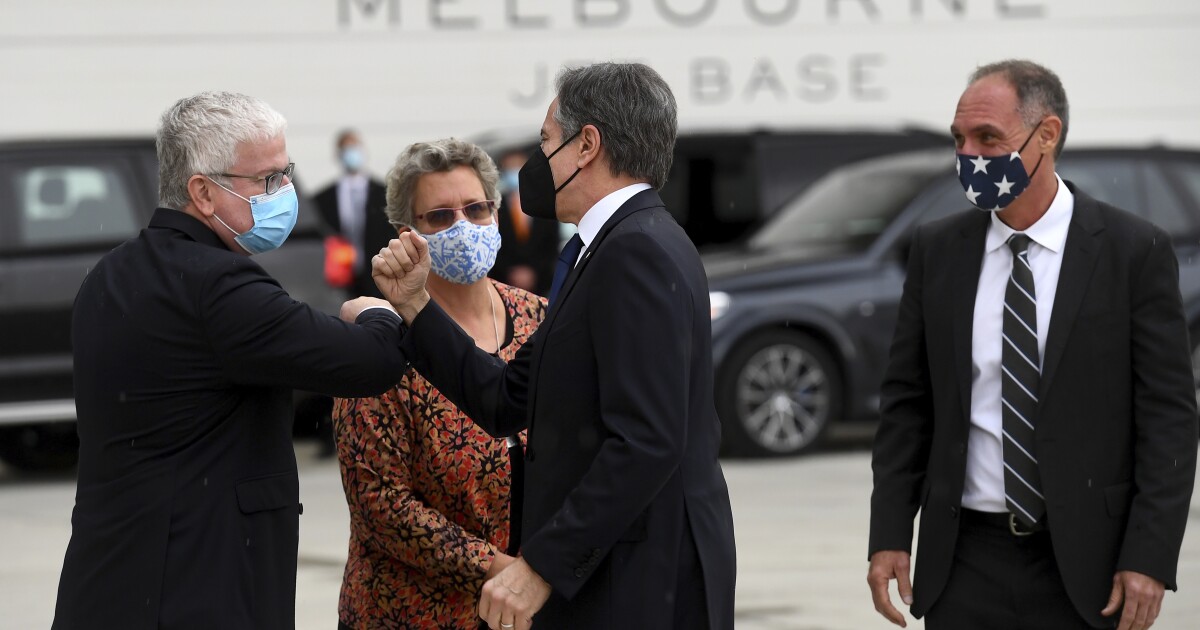 Like many US governments before it, the Biden administration intended a foreign policy “pivot” toward China and Asia. Instead, Washington quickly faced war in Gaza, a chaotic pullout from Afghanistan and a possible Russian invasion of Ukraine.

On Wednesday, Secretary of State Antony J. Blinken arrived in Melbourne, Australia, for a regional tour that will see him try to reassert US influence in the Indo-Pacific against a rising China and to reassure allies worried that their issues are being given less priority in Washington.

Blinken is scheduled to meet with his Australian, Indian and Japanese counterparts, whose nations, together with the US, form the Quadrilateral Security Dialogue, or Quad, an on-again, off-again group established as a counterbalance to Beijing.

Speaking to reporters traveling with him, Blinken insisted that the Biden administration has maintained a “sustained focus” on the region despite an all-consuming and urgent mission to prevent Russia from invading Ukraine. He said he was on the phone in consultations over Ukraine during the long flight from Washington to Australia — the latest of some 200 engagements in recent weeks — and acknowledged that video-conferences and calls between Washington and European capitals on the crisis would continue to hum in the background of the talks in Melbourne.

“Having said that, the world is a big place, our interests are global and you all know very well the focus that we have put on the Asia-Pacific and the Indo-Pacific region,” Blinken said.

Blinken and the Quad representatives will tackle an “increasingly broad and deep agenda,” he said. It will be dominated by what most other countries in the region see as Chinese aggression on land and seaas well as other issues such as emerging technologies that can also be threatened by Beijing.

Australian Foreign Minister Marise Payne welcomed Blinken’s arrival and that of the other Quad ministers, saying that by gathering here they were “voting with their feet in terms of the priority that they agree to [Indo-Pacific] issues.”

US officials tacitly acknowledge a pep talk is in order.

Blinken “will demonstrate the strength and the credibility of America’s commitment to the Indo-Pacific region,” Daniel Kritenbrink, the assistant secretary of State for East Asia and Pacific affairs, said ahead of the trip. “We intend to demonstrate that our partnerships deliver, and they deliver practical and real benefits to our own peoples and to the peoples of the region.”

Some in Asia expected greater interaction with President Biden, who campaigned on a shift to “strategic competition” with China as a pillar of his foreign policy. During Biden’s eight years as vice president, the Obama administration had also promised a “pivot” to Asia as its diplomatic focus.

Instead, as crises erupted around the world, full-on engagement was delayed. In the meantime, Chinese President Xi Jinping, who has converted himself into leader for life, continued to claim Beijing’s sovereignty over disputed islands in the South China Sea; pushed its massive “Belt and Road” program, which spends billions of dollars in development money to gain influence in Europe, Africa and Latin America; and ignored international criticism of its treatment of the Muslim Uyghur minority, which the US has called a genocide.

The US and several Western countries refused to send government delegations, but Russian President Vladimir Putin attended, striking a masterfully symbolic pose with Xi as the leaders of a new post-democratic alignment. The two men issued statements lavishing support on one another.

“A much more powerful and assertive Xi government increasingly sees US geopolitical strategy and activities in Asia through a very similar lens as [the one through which] Putin has long viewed American activities in Europe,” Ian Bremmer, president of the Eurasia Group, said in an analysis of Blinken’s tour. “To China, the Quad feels a lot like NATO encroachment does to Putin.”

One potential flashpoint is China’s claim on Taiwanwhich Beijing considers a breakaway republic much as Putin views post-Soviet Ukraine.

Despite its stated focus on the region, the Biden administration still seems to be seeking its footing in Asia policy, said Michael Green, an Asia expert at the Center for Strategic and International Studies, a think tank in Washington.

The Trump administration receives credit for designating China as a strategic competitor, Green said, although it did not follow through with policy. Biden “has picked up and amplified” that decision, “but has essentially no economic strategy for Asia.”

Green noted the issues that Blinken and others list, such as emerging technologies and digital, trade and supply chains, but said the response so far was without “content.”

“It’s all nouns and no verbs,” he told a podcast for the National Bureau of Asian Research. “There’s no action — it’s all just themes.”

They murder a man inside a car in KU

Pollsters under magnifying glass after failures with Jair Bolsonaro