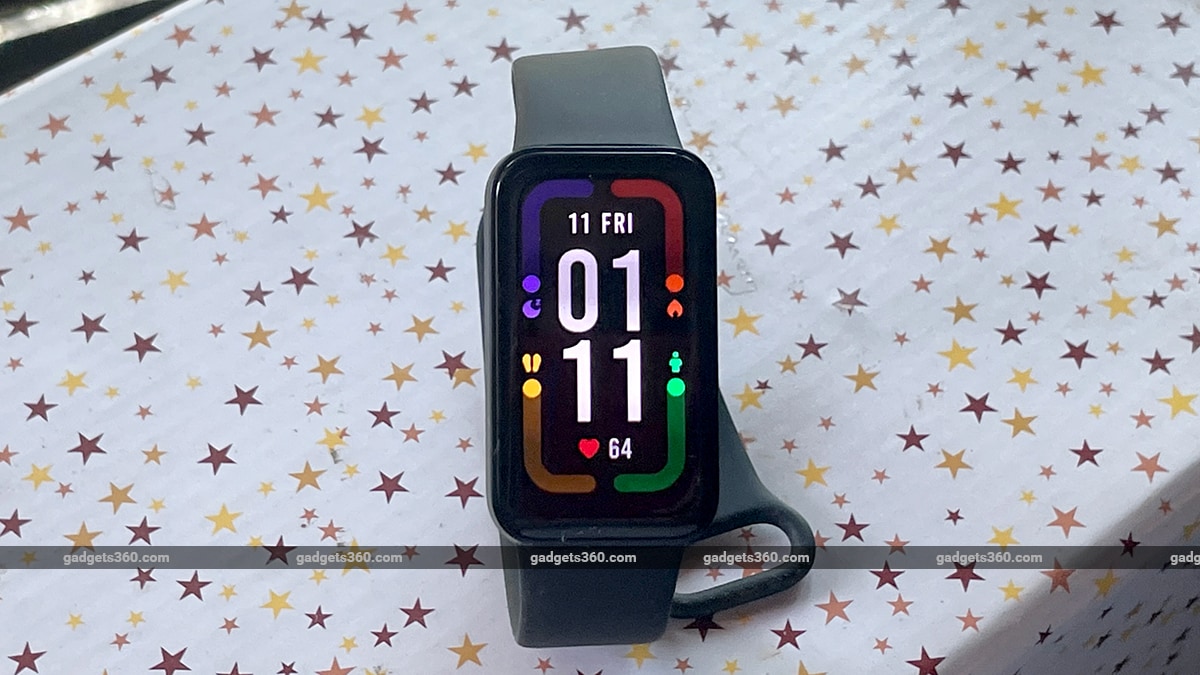 The Redmi Smart Band Pro has a rectangular polycarbonate body that houses a 1.47-inch AMOLED screen. This panel is large enough to easily read the text without having to squint. It also has an always-on mode and there’s an ambient light sensor to adjust its brightness automatically. The Smart Band Pro has no buttons and navigation is purely touch. You get TPU (thermoplastic polyurethane) straps that are curved, similar to the ones on the my band 6 (Check). These straps have a patented connector, making them easy to remove without the need for additional tools. However, those looking for third-party alternatives might have a hard time finding them on the market.

The bottom of the Redmi Smart Band Pro has all the health sensors placed in a pill-shaped protrusion. There are also contact pins that are used to charge the Smart Band Pro. The supplied charger has magnets, making it easy to plug this fitness band in for charging.

I found the Redmi Smart Band Pro to be super light at just 25.5g. I hardly noticed it on my wrist, and I also used it in bed with no problem. The Smart Band Pro has a 200 mAh battery and is water resistant to 5 ATM.

The Redmi Smart Band Pro can be paired with Android as well as iOS smartphones using the Xiaomi Wear and Xiaomi Wear Lite apps, respectively. The pairing process is simple and requires a Mi account. Once paired, either app can also be used to change some of the Smart Band Pro’s settings. The apps support multiple Me and Redmi wearables and are very easy to use. The band syncs with the app on your phone, after which it can display different parameters. You can also change watch faces on Redmi Smart Band Pro using the app. There are over 50 watch faces to choose from, and you can also set a photo from your phone gallery as a face.

You can track nearly 110 different types of workouts including 14 water exercises on the Redmi Smart Band Pro. The commonly used ones like walking, running, cycling, HIIT, trekking and swimming can be activated on the band. exercises right away. You can edit the list of available ones based on your training regimen. The Redmi Smart Band Pro can automatically detect some activities, such as running, walking, and treadmill use. Apart from this, Redmi Smart Band Pro can also track heart rate, SpO2, sleep, stress, and menstrual cycles. The band is capable of tracking the wearer’s heart rate continuously and also SpO2 levels while sleeping, but these features are turned off by default to save power.

The Redmi Smart Band Pro has a very simple user interface. You can swipe right from the home screen to access quick toggles and swipe left to access widgets for heart rate, SpO2, weather, workouts, and fitness stats. Swiping down from the top lets you see unread notifications from your paired smartphone, and swiping up from the bottom shows you all the Smart Band Pro features.

Performance and battery life of the Redmi Smart Band Pro

I used the Redmi Smart Band Pro for a week and found it comfortable to wear at all times. The screen was viewable outdoors, but I found it to be too bright when sitting in a dark room, even with auto-brightness adjustment enabled. While the interface was very easy to use, it didn’t feel very smooth at first, especially when scrolling. During the review period, a software update (1.1.127) fixed this issue. The Smart Band Pro’s raise-to-wake feature was well calibrated, and the screen always lit up when I raised my wrist. It was just as quick to explode when I lowered my hand.

You can track your SpO2 level on Smart Band Pro

I had to manually enable automatic heart rate and SpO2 tracking, as well as app notifications and advanced sleep tracking metrics, using the app. I set the Redmi Smart Band Pro to measure my heart rate at one-minute intervals and SpO2 every 30 minutes while I slept. I’ve also enabled alerts for resting and active heart rates, and set the band to vibrate for incoming notifications.

As far as fitness tracking goes, I was pleased with the accuracy of the Redmi Smart Band Pro. I used a apple watch series 7 (Check) for comparison and found the heart rate measurement to be in the same range. Periodically monitoring my heart rate had a negative impact on battery life (more on that later), but it did result in more useful stats. Sleep tracking was accurate and the band gave me a full breakdown of my sleeping pattern. I enabled SpO2 tracking while sleeping and the device did. I took readings manually during the day and found it to be in the same range as what a medical grade pulse oximeter reported.

I used the Redmi Smart Band Pro to track my night walks. Since it doesn’t have a built-in GPS, it relies on the paired smartphone for accuracy. Without GPS, the Redmi Smart Band Pro did not report the distance, measuring 0.96km for the actual 1km I walked. With a paired smartphone in my pocket, the band fared better, measuring 1.02km for the same distance.

It’s also capable of automatic workout detection for three specific workouts, as I mentioned earlier. The Redmi Smart Band Pro prompted me to track my walk within a minute of starting the activity. It measured 1,002 steps for every 1,000 steps I counted, and this error rate is acceptable given the price of this fitness tracker.

Battery life was decent given the small 200mAh battery, but it really depends on how you use your Redmi Smart Band Pro, so your experience will vary. I enabled the always-on display, set the heart rate tracking interval to one minute and the SpO2 tracking interval to 30 minutes during sleep, and used the advanced sleep tracking option. App notifications have also been enabled and the Smart Band Pro has been used to track daily outdoor walks.

With such intense use, the fitness band lasted four and a half days, considerably less than Xiaomi fourteen day battery claim, which might be possible with light use. With a few compromises, you should easily be able to run for over a week on a single charge. The supplied magnetic charger latched onto the band quite easily and managed to recharge the battery in under an hour and a half.

The Redmi Smart Band Pro includes all the features one would expect from a fitness band and it has been launched at a good price. It will appeal to those who want a larger screen than the my band 6 (Check), which is also a less expensive option and will suit those who want a slimmer profile on the wrist. The honor band 6 it is a direct competitor to the Smart Band Pro and offers a similar feature set at the same price level.