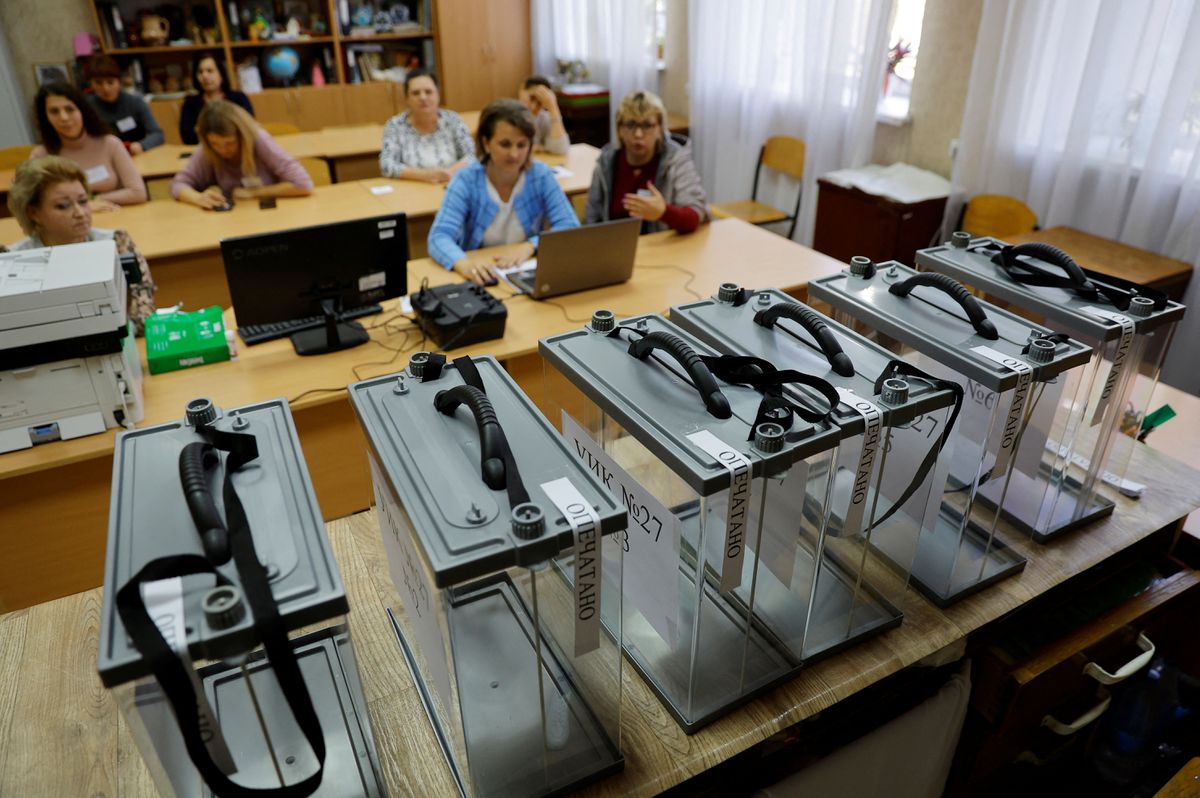 From this Friday, until the following Tuesday, the eve of the seven-month anniversary of the invasion, pro-Russian occupation authorities deliberated on Russia’s occupation of four regions of Ukraine. None of them are completely under his control and all of them are at war. There are no observers to ensure the proper conduct of a process that the international community considers illegal and which no body gives any official recognition.

The Kremlin intends to establish its position in those regions, as it did in 2014 Crimean peninsula, There is some doubt that the referendum in Donetsk, Lugansk, almost completely occupied, Zaporizhia and Kherson, partially controlled, will yield results favorable to the interests of the organisers. Moscow’s aim in seeking to annex these areas is likely to increase its military’s military response in the event of aggression, because if the vote is successful, it is believed to be a response to a threat against its own country.

These referendums come at a critical moment for Russian President Vladimir Putin, who has had to take a step back in the face of battlefield defeats over the past two weeks. The president has announced a controversial partial mobilization of the population to face the conflictDue to which thousands of youth have fled the country to avoid going to war., Ukrainian troops advance Thousands of Russian troops stationed in northeastern Ukraine for months have been forced to swiftly withdraw. The biggest prisoner exchange in seven months, carried out on Thursday, also did not go down as well in Kyiv as in Moscow.,

To increase voting, organizers are allowing underage citizens aged 13 to 17 to vote with their parents or guardians, Kyiv officials revealed on Thursday via information from the secret services. In addition, adds the same source, it is planned to bring families from the Donetsk region who are living in Russia.

The Ukrainian governor of the Lugansk region, Sergei Gaidai, has condemned that many citizens are being forced to vote, as published on his Telegram social network profile. Gaidai, the legitimate authority on Ukrainian territory that is almost entirely controlled by Moscow, which supports him, also adds that the Russians produced video equipment to “film propaganda stories” about the vote.

“In a company in Bilovodsk, the boss announced to all employees that attendance is mandatory. Those who do not participate in the vote will be automatically dismissed and the list of those who do not attend will be sent to the security services of the Lugansk People’s Republic. will be handed over. [como se autodenomina la autoridad prorrusa]”, warned Gaidai. In a second case, in Starobilsk, this Ukrainian governor continues, “The occupation authorities prohibited the local population from leaving the city between 23 and 27 September. [las fechas entre las cuales se extiende la consulta], According to available information, the occupiers are forming armed groups to patrol homes and forcing people to participate in the so-called referendum”, explains Gaidai.

Before a single vote is introduced in the elections, the international community has already declared that the result of a referendum deemed invalid will not be recognized. It is stated by the United Nations, NATO, the European Union or the United States. In addition, Kyiv officials say they do not intend to change their objective of maintaining a counter-offensive deployed in the north-east of the country, which has allowed them to recover the Kharkov region and thereby reduce Russian positions in Donetsk. Improve your position on the battlefield to evacuate. and Luhansk.

The consultation is conducted in an area that accounts for about 15% of Ukraine’s 600,000 square kilometres. It is there, in those four regions to the east and south of the neighboring country, that Russia is now focusing its efforts.

On February 21, Russian President Vladimir Putin signed a decree that, according to him, gave him official status. Two self-declared independent people’s republics of Donetsk and Lugansky, At the same time, he announced the sending of “peacekeeping” troops to those areas. This was the prelude to the attack he had ordered shortly afterwards and which began at dawn on the 24th.

The industrial area of ​​the Donbass, which is occupied by these two regions in eastern Ukraine, has been the scene of a war since 2014 between pro-Russian militias backed by Moscow and the Ukrainian military. The fact that since the beginning of September local troops have occupied more than 8,000 square kilometers in Kharkov, allows them to establish themselves at the gates of the coveted Donbass. This is where the Ukrainian military hopes to continue to open a gap these days and where Putin hopes to be able to improve its military presence with the latest measures announced.