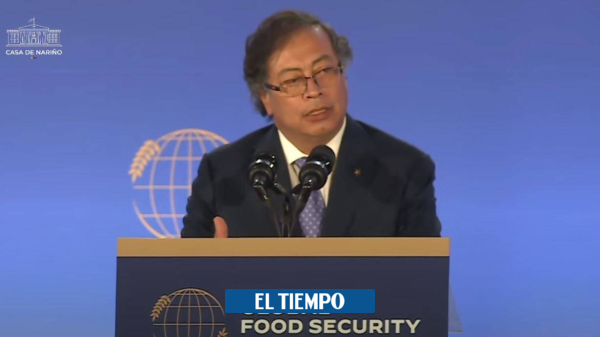 President Gustavo Petro, from the United States, announced that he will propose a multilateral ceasefire within the framework of the total peace project. This would include criminal gangs, illegal groups, the Police and the Army.

The president stated that in what has to do with the negotiations with the ELN it is “a matter of days” for them to start.

He added that “in a matter of days” the possibility of a multilateral ceasefire will also be considered, which would be the beginning of the end of the violence in Colombia with all the groups that adhere to that possibility.

Asked by journalists if this would include the country’s military forces, he said it would be a “multilateral ceasefire, which means that the various actors, which are multiple, stop firing.”

He clarified that the Army would also continue to function.

“It will involve all those who want a negotiation process with the justice system in Colombia to dismantle criminal organizations. What we propose is to cease hostilities, death, cease fire. Since it is a plurality of organizations, that is called a multilateral ceasefire. “added the president.

But what does a multilateral ceasefire mean in practice? In principle, President Petro gave stitches by announcing that they implicated all the criminal organizations that cause violence in Colombia.

However, the question of whether it will also include pure drug trafficking organizations that are currently the engine of the enormous disturbance of public order remained hanging in the air.

And there is an element of vital importance to solve: What will be, then, the role of the members of the Public Force who, by order of the National Constitution, must act against all the actors that provoke violence in the country in defense of the citizens? ?

Petro’s announcements, therefore, augur a huge controversy. However, it must also be said that during the Petro campaign he announced that he would seek peace with all the violent actors in Colombia.

After his victory in the elections and, subsequently, as president, he has reiterated that one of his purposes will be to achieve total peace.