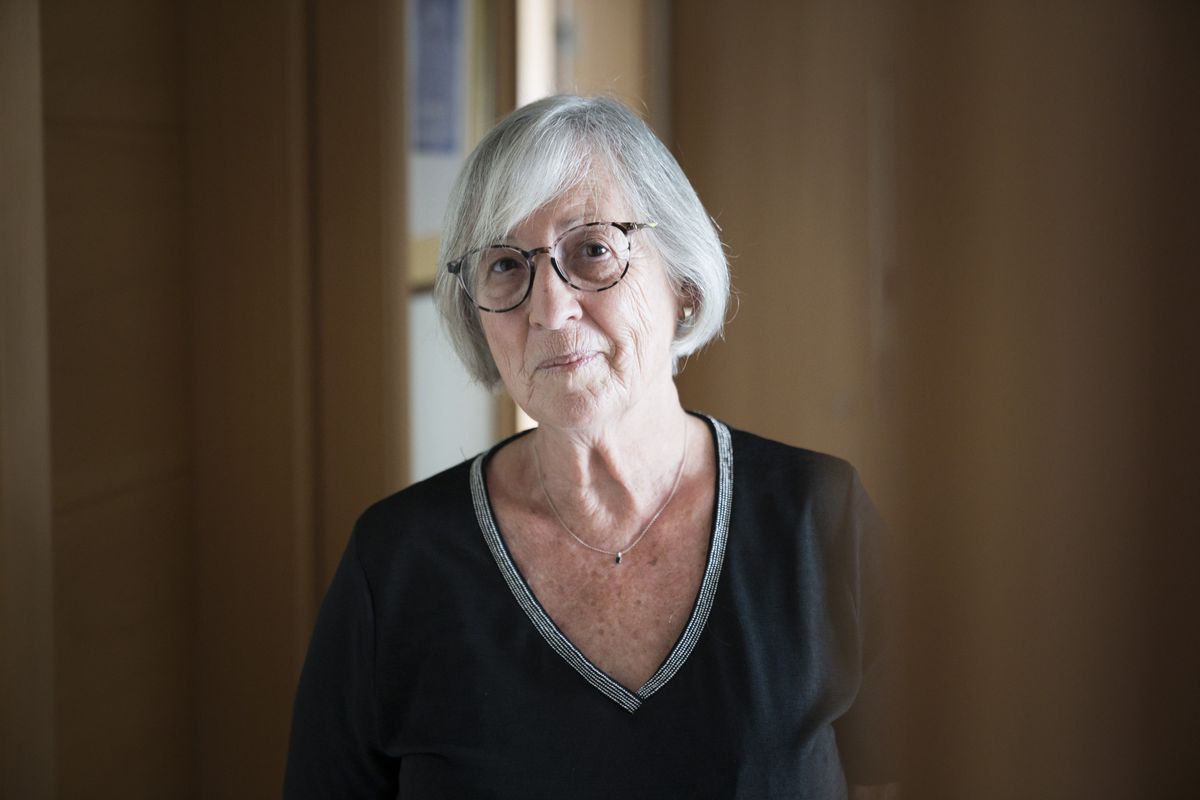 
Carme Guilló, 74, was recovering from a bothersome lower back pain when shingles heralded its arrival with “excruciating pins and needles of pain” in the chest They spread out to the back. “They are like lashes that make you scream even if you are alone at home. I spent a month hardly daring to go out. My problem is that four months ago, the herpes has passed and the pain continues. I have been told that I suffer from postherpetic neuralgia, which is a frequent complication”, says this retiree who worked for the University of Barcelona.

Some 60,000 Spaniards each year suffer from the scourge of herpes zoster, a disease that infects nerve endings and develops with a painful rash on the skin. It is caused by the same virus that causes chickenpox in children and is behind 4,000 hospitalizations and twenty deaths in Spain, according to a report prepared by researchers from the Carlos III Health Institute. Although the disease can occur at any time in life —and even suffer from it more than once— “people with a weakened immune system, due to age or other diseases, are the ones who are most at risk of suffering from it”, explains Josefa Masa-Calles, study coordinator and researcher at the National Epidemiology Center.

The autonomous communities are now setting up the devices to deploy Vaccination against herpes zoster among the Spanish elderly. The recommendation, approved in March 2021 by the Public Health Commission —formed by the Ministry of Health and the communities—, has been slowed down for two reasons: the limited availability of vaccines on the market and their high price (the communities are buying them for between 120 and 150 euros per dose).

In the first place, in the last year throughout Spain, the groups at greatest risk have been prioritized: adults who have received a transplant, some cancer patients and other immunocompromised patients. In a second phase, which begins now, the population to be immunized each year are those who turn 65 (born in 1957), first, and also those who reach 80 (in 1942). The objective is that, over the years, all those over 65 in Spain are protected. But the strategy is gradual and there are groups that are left out. For some, those who are over 65 and under 80, it will be temporary, until their turn comes. Those older than this age, however, are not expected to be vaccinated.

“These are decisions with which we try to maximize the benefits taking into account the dose limitation, the available resources and the cost-benefit balance. In the debate, which has an ethical component, factors such as epidemiological studies, demography, life expectancy are taken into account…”, says Josefa Masa-Calles.

The vaccine chosen for its efficacy and safety in Spain is called Shingrix, from the pharmaceutical company GlaxoSmithKline (GSK), which is approved for adults over 50 years of age (18 in risk groups) and is administered in two doses separated by two months. . According to the company, “although until last year the availability of doses in Spain was limited, since last January, GSK guarantees the supply of all the doses that are required by the regional authorities for vaccination programs.” In addition, “since May 1, 2022, the vaccine is available in pharmacies” for those people for whom their doctor prescribes it and they assume to pay for it out of pocket. The price per dose in this case is 217.52 euros.

Although caused by the same virus, chickenpox and shingles are two different diseases and therefore require different vaccines. “Chickenpox is a systemic infection that usually only happens once. But when we are cured, the virus does not completely disappear from the body, but remains dormant inside some cells of the nerve ganglia. The immune system prevents it from producing a systemic infection again, but if we suffer a drop in defenses, the virus can reactivate by spreading through the nerve endings. That is why it is so painful”, explains Africa González, professor of immunology at the Biomedical Research Center (CINBIO) of the University of Vigo. This means that shingles is not contagious, since to suffer from it you must have had chickenpox before. But a person who has never been exposed to the virus can contract this second disease if he comes into contact with any patient with either of the two ailments.

The chickenpox vaccine produces an immune response that prevents the disease. In Spain it was introduced in the vaccination calendar in 2005, although only for adolescents who had not passed the disease naturally as children. The goal was to prevent them from contracting it as adults, when chickenpox is more severe and the risk of complications multiplies. In the following years, several communities advanced the vaccine to the first year of life, something that became general for all of Spain in 2016. Thanks to this, cases have fallen by more than 95% in a decade (from about 400,000 a year to a few thousand now).

“The herpes zoster vaccine is different. When you have a virus inside a cell, antibodies are not effective. You need the cellular response, T cells that kill infected cells. And this is the type of immune response that deteriorates with age and that we need to reinforce. This vaccine does so thanks to some adjuvants that keep the virus under control”, says Africa González

The Community of Madrid began in May to immunize people born in 1957 and 1942. The way to do it is through already scheduled appointments or reviews, in which the vaccine will be offered to patients. Catalonia has just started the same strategy, while Asturias and Castilla-León have started only for those who are 65 years old.

Andalusia is still focused on the vaccination of risk groups and plans to expand immunization to older people “depending on the objectives achieved and the availability of doses.” Aragon plans to take this step “as soon as possible”, as does the Valencian Community.

The Balearic Islands, Cantabria, Castilla-La Mancha, Extremadura, Galicia, Murcia and Navarra will start vaccinating 65-year-olds “next year” or are planning to do so. La Rioja, the Basque Country and the Canary Islands have not informed this newspaper of their intentions.

Ana Pilar Javierre is a family doctor at the Goya health center (Madrid). “Herpes zoster is a disease that we often see in the consultation. It is commonly known as shingles because of the way in which the skin rash spreads along the skin following the nerve endings. Patients complain of very intense pain and that is because the virus affects the nerve, which causes great sensitivity. Some say they feel like electric shocks, others like cigarettes being stubbed out on their skin…”, she explains.

The usual treatment is with antivirals (there are several). “They must be taken in the first 72 hours after the appearance of the skin lesion to shorten the duration of the acute phase, although what we have not observed is that these drugs manage to reduce the risk of complications,” adds this physician. A common complication if precautions are not taken is bacterial infections in the rash that shingles causes on the skin. To avoid this, “topical copper or zinc sulfate solutions” are administered.

But the most frequent of the complications is postherpetic neuralgia, which occurs when the nerve fibers affected by the virus continue to hurt long after they have been infected by the virus. Up to 20% of patients suffer from it, even more among the elderly. “There is no cure, treatment is symptomatic to relieve pain. We use drugs such as gabapentin, pregabalin… and in some cases a topical anesthetic, lidocaine in patches”, explains Ana Pilar Javierre, who is also a member of the vacuans working group of the Spanish Society of Family and Community Medicine (SEMFYC).

Carme Guilló’s doctor has prescribed pregabalin and lidocaine patches. “With this at least I can sleep a little better, although it is still quite hard. Now I am waiting for the pain clinic to try to block the punctures that I suffer with a small operation on the spine, ”she says.

The disease also causes other more serious complications, although rare, when it affects the nerves of the face and reaches the ear or the eyeball. In these cases, it can cause irreversible vision and hearing loss. Mortality associated with shingles usually occurs in people with serious associated health problems.

Francisco Tarazona, member of the Spanish Society of Geriatrics and Gerontology (SEGG) highlights “the important impact that herpes zoster has on the functionality, psychological state and quality of life of many older people”, for which he considers the extension of the vaccine is good news “because it will significantly reduce the number of cases.” This specialist urges the communities to “establish vaccination schedules in the elderly, as some, but not all, already have, to avoid the harmful effects of potentially harmful diseases in this age group.”

The fact that the same virus causes two diseases makes it necessary to take into account the impact that vaccination against one of them may have on the other. In recent years, this has provoked a debate about the advisability of varicella vaccination in children. “The supporters defend that with the vaccine infections in childhood are avoided and, therefore, in addition to reducing the burden of this disease, in the long run the elderly will no longer have the latent virus and there will be no cases of herpes zoster. The detractors, for their part, argue that by greatly reducing the circulation of the virus, the elderly who do have it lose the natural reinforcement that they were supposed to come into contact with throughout their lives, which can increase the amount and severity of herpes zoster cases in the coming years”, sums up Josefa Masa-Calles.

This expert believes, however, that there are still many years to go to corroborate which of these hypotheses will end up being confirmed, since the vast majority of people over 20 years of age in Spain have had chickenpox as children and there are decades of studies to obtain reliable results. At the moment, according to current vaccination recommendations in Spain, “no significant increase in the incidence of herpes zoster has been observed in the adult population in Navarra”, the first community that universalized the chickenpox vaccine 15 years ago.

Spain slowly improves its educational level: 28% of young people between 25 and 34 years old have at most ESO