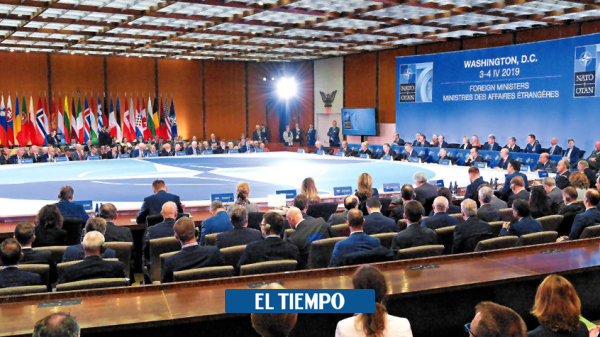 A new “strategic concept” will be one of the main outcomes of the NATO summit in Madrid on June 29 and 30, Renewed document that will guide coalition strategies in the coming years and that will take into account the current crisis with Russia, China’s strengths or emerging and disruptive technologies.

(You may be interested in: Ukrainians call off attacks in the east and NATO fears war will last for years,

In the words of Allied Secretary-General Jens Stoltenberg, the Madrid strategic concept will “reflect the new security environment, re-commit to our values ​​and reaffirm our unity, ensuring that our alliance is future-ready.”

(You may be interested in: Turkey stipulates the merger of Finland and Sweden into NATO,

At the Brussels summit in 2021, NATO heads of state and government asked Stoltenberg to lead the development process of the next strategic concept, for which he began a phase of internal consultations on environmental development, vision and coalition priorities.

In addition, NATO is engaged in dialogue with its allies, other international organizations and specialist communities, youth organisations, civil society and the private sector.

This consultation phase has served the allies to negotiate and agree on the next strategic concept in view of the leaders who ratified it at the Madrid summit.

What is a strategic concept?

NATO sees this document as a key to reaffirming its values, goals and actions: it provides a collective assessment of the security challenges facing the coalition and outlines the political and military actions it will address. to do.

Thus, it gives orientation on its future political and military development.

The strategic concept is regularly reviewed and updated, such as approximately every ten years since the end of the Cold War, to take into account changes in the global security environment and ensure To ensure that the alliance is future ready.

When the Madrid One is approved, it will be the fourth since the end of the Cold War, a period in which strategic concepts were graded and renewed every decade.

The last time Allied leaders adopted a strategic concept was at the 2010 NATO summit in Lisbon.

That document paved the way for the Coalition to modernize its ability to fulfill its core missions of collective defense, crisis management and cooperative security, while continuing to promote international stability.

It urged allies to invest in key capabilities to address emerging threats, offered new opportunities for dialogue and cooperation with partner countries around the world, and kept the door open for European democracies to NATO membership.

But the world is changing in the past decade and NATO believes that strategic competition is increasing, so it is time to update the strategic concept.

In 2010 it considered cooperation between NATO and Russia had “strategic importance” and called for “true strategic cooperation” with Moscow.

On the other hand, Russia’s aggression against Ukraine, with the first illegal occupation of the Crimean peninsula in 2014 and the invasion of the country since February, makes the need to revise the strategic concept inevitable.

Russia’s assertiveness is not the only reason it would be necessary to renew the strategic concept, but it is a circumstance that will clearly mark the new document, according to allied sources, who insist that NATO should be strengthened. should confirm and guide concrete measures for Core values ​​and principles.

Stoltenberg further stated that the new document would prepare the coalition for “an era of strategic competition and escalating security threats”.

It is expected to refer to China, which did not appear in the 2010 concept, but whose military might and was against the open door policy of an alliance with Russia.
NATO has put the coalition on alert.

As recommended by the NATO Parliamentary Assembly, the new strategic concept should establish the pillars of a common policy towards China: engage whenever possible, compete to maintain the alliance’s gains and independence, and when Refuse if the interests of the security of the Allies are threatened.

Accordingly, NATO will pay more attention to the situation in the Indo-Pacific and how it can affect transatlantic security, with a special emphasis on its participation.

In addition, the new document should also express NATO’s commitment to women’s contributions to peace and security, not to mention the 2010 document, and to place special emphasis on emerging and disruptive technologies as well as in the digital sector. needed.

Terrorism, the impact of climate change on security and armed forces, nuclear deterrence or arms control and non-proliferation as the ultimate guarantee of the security of the Allies are also key points expected to be covered in the document.

United Kingdom and Spain: “NATO must look to the countries of the south”

The United Kingdom believes that NATO should continue to support Ukraine to win the war with Russia and focus its efforts on threats from the east, although it should also focus on the “southern side”. should, the British ambassador said in Madrid on Wednesday. Hugh Elliot.

“We cannot forget that we are experiencing an intensification of Russian activity in several countries on the southern coast that interest us and we must be very sensitive to this reality.”The diplomat said in a meeting with reporters in which he talked about the next NATO summit.

(You may be interested in: Turkey stipulates the merger of Finland and Sweden into NATO,

Elliott pointed out that the idea, which was also defended by the Spanish government within the coalition, should be present at a meeting of allies that would define NATO’s new defense strategy for the next ten years.

The ambassador recalled the recent visit of the British Defense Minister, Ben Wallace, to Madrid and a meeting with his Spanish counterpart, Margarita Robles, in which he spoke of his country’s support for a debate on the issue at the summit, which would be the so-called Formulate the Madrid strategic concept.

Elliott insisted, “We are very interested in the southern part and NATO should address those challenges as well,” although he acknowledged that the war in Ukraine has put Moscow down too low and that it is difficult for other countries to intervene. Leaving you with less resources to do.

The diplomat spoke of the Wagner group, a commando of mercenaries that they belong to the Klemlin “as much as (Russian President) Vladimir Putin denies this, and who has acted in war in Libya or the Sahel, whose stability is essential. is Europe, and
NATO should be aware of this,” he said.

“Helping Ukraine is also strengthening the southern part,” because it means weakening Russia. “The situation in various areas needs special attention, but I hope that this will be discussed at the NATO summit,” he stressed.

Even then, The diplomat explained that the threats “go beyond the Russification of the South”.There are other problems, such as terrorism or illegal immigration, which, apart from NATO, can be addressed by other organizations such as the United Nations or countries with their own initiatives.

,Guaidó or Maduro, who will be invited to the inauguration of the Petro?
,USA: Uvalde shooting elementary school will be demolished
,Fire at Miami airport landing, three injured