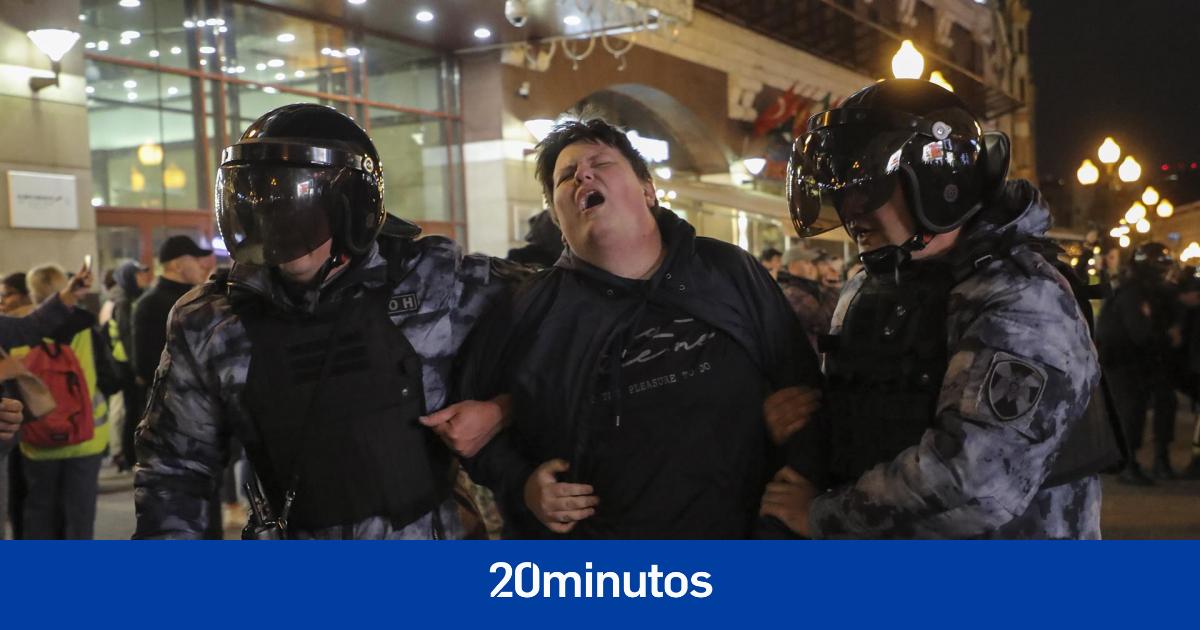 Table Of Contents hide
1. Blocked flights and collapsed borders
1.1. Like this:


seven months after the start of the Russian offensive in UkraineThe slogan “Not for War” is raised on the streets of many Russian cities. Russian citizens have protested in different parts of the country regarding the announcement of “Partial mobilization” of the population done this Wednesday by its President, Vladimir Putin, With a serious tone, hands resting on the table and looking at the camera, Russian president sent more than 300,000 compatriots to the frontWho will pack their bags and leave for the border in the next few days. measure, which was expected since Ukraine a week ago Russian troops pushed back on the battlefield And as internal pressure grew around the Kremlin, it caused queues at various borders of the country and the collapse of flights to and from Russia.

Protests in Yekaterinburg, Moscow or St. Petersburg, which was announced by the Russian opposition for Wednesday afternoon, was quickly suppressed throughout the afternoon, resulting in over a thousand arrests, Cameras from the international press saw attendees being pushed into buses, headed for police offices as they were full.

Protests have erupted in Moscow after Russian President Vladimir Putin ordered a partial mobilization, saying “No war!” slogans have been raised. and “Putin, go into the trenches!”pic.twitter.com/6B5vUpMGlR

A few hours ago, the Moscow Prosecutor’s Office warned that participating in demonstrations or simply disseminating calls may be the culprit, The Public Ministry has insisted that these mobilizations have not been coordinated with the authorities concerned, who would have to allow any such action. It should be noted that the authorities did not authorize any concentration against the war in the seven months that the invasion has already begun.

During his second televised speech since the start of the Russian offensive, Putin pointed to the West as the main culprit in the situation, which he blamed for “crossing all red lines”, abandoning the potential use of nuclear weapons, “It’s not a hoax,” he said. In addition, he expressed that countries that are now on the side of Ukraine “have been preparing these plans for a long time” and also blamed them for the dissolution of the Soviet Union.

The message comes a day after the simultaneous announcement of A referendum on accession to Russia is planned for the next few days In the occupied provinces of Donetsk, Lugansk, Kherson or Zaporizhia. Putin assured that he would “protect” these popular consultations and focus on the United States, the United Kingdom and the European Union: “They are directly prompting Kyiv to move military operations into our region. They Now do not hide that Russia must be defeated by all means on the battlefield, after being deprived of all political, economic and cultural sovereignty”.

It didn’t take long for a response from the United States and he described “sign of weakness” Partial mobilization and warned that threats about the use of nuclear weapons should be taken “seriously”. Joe Biden This Wednesday the United Nations Headquarters in New York reported that “no one has called for a conflict more than Russia” and assured that they are already working so that Putin “pay for all the atrocities you’ve been doing“. Washington actually leads a NATO that does a similar analysis of the Russian turn. “It is an escalation but we are not surprised. Russia has made a huge miscalculation in this war and it is not going the way they wanted it to,” said Alliance Secretary General Jens Stoltenberg.

The European Union, for its part, describes the dangers of the use of nuclear weapons as “unacceptable”. “The international community must unite to stop these actions. world peace is in danger“, warned the High Representative, Joseph BorrellWhich sees this increase as a “real threat to all”.

The internal pressure Putin has faced in recent days to declare total war and mobilize entire populations has been partially satisfied With this Wednesday announcement. However, outside his borders, Putin’s allies are reluctant to give him explicit support. China said in a statement this Wednesday that dialogue should be given priority to resolve the conflict, claiming that “ceasefire thereby satisfying the security concerns of the parties.” Another example is of Turkey, which is a member of NATO but has good relations with the Kremlin, which Russia asked on Tuesday. leave occupied territoriesJoined Russia in 2014, including Crimea.

While Putin was giving his speech, many Russians are looking for a way to leave the country. Google Trends data this morning recorded an increase in searches for Aviasales, the most popular web portal in Russia to buy a flight. A few hours later, Russian air connections with countries that Direct routes still blocked,

Turkey, one of the countries that does not require a visa for Russian citizens, is currently inaccessible. Flights to Istanbul, Ankara and Antalya airports have been sold out and a Turkish Airlines spokesperson was quoted by the DPA news agency. has announced that they will expand their capacity in the coming days,

In addition, there has been an increase in Internet searches relating to possible exits from Russia or ways to avoid potential call-ups. seeks “How to leave Russia” Shot on Google in the afternoon, queues were seen at borders like Finland and Georgia to leave Russia.