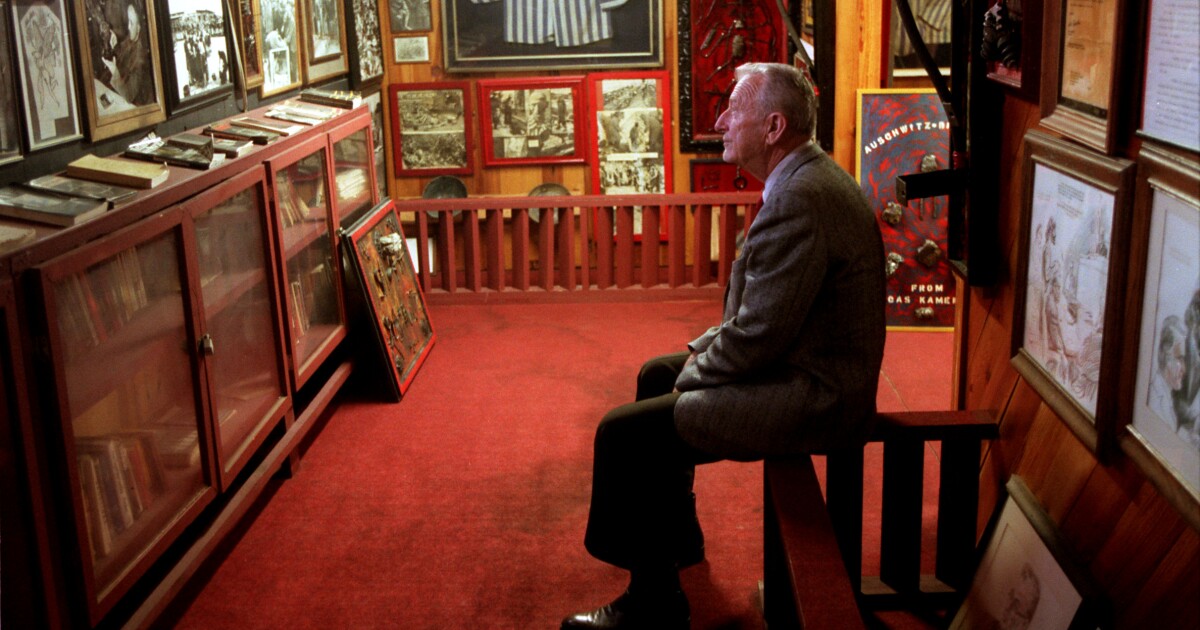 All of 17, Mel Mermelstein wasn’t sure of his fate when he was forced to board a train bound for Auschwitz.

At the Nazi death camp, I have watched soldiers lead his mother and two sisters to the showers where they’d be gassed. As the months wore on and his body from him withered to a skeletal 68 pounds, he learned his father from him had died as a slave laborer at a nearby coal mine and his brother from him had been fatally shot on a death march to another camp .

When the Nazi concentration camps were finally liberated and the gates swung open for all the world to finally see the atrocities that had been unfolded inside, Mermelstein promised himself that he would forever be an outspoken public witness to the Holocaust.

His vow came into full display decades later when he took on a right-wing group that claimed the Holocaust was a myth and offered to pay $50,000 to anyone who could prove that any Jews had been killed in the concentration camps. By the time Mermelstein was through with them, the Torrance-based Institute for Historical Review was forced to pay double the reward, make a public apology and stand in humiliation as a Los Angeles trial judge ruled — firmly — that the Holocaust was “an indisputable fact.”

Never far from his mission to prevent the Holocaust from fading from world view, Mermelstein died Friday at his home in Long Beach from complications of COVID-19, his daughter Edie Mermelstein said. He was 95.

An author, lecturer and memory keeper, Mermelstein made more than 40 trips to Auschwitz, Buchenwald and other World War II death camps, collecting strands of barbed wire, cyanide canisters, bone fragments, pieces of ovens used in cremations and other grim tokens of the death camps. He even returned from one trip with a grainy photograph of himself huddled with a group of starving men in the barracks.

Mermelstein eventually built a museum at his Huntington Beach lumber yard where he displayed the artifacts — nearly 700 in all — and then invited students to tour the facility, part of his nonprofit Auschwitz Study Foundation. His daughter said the wartime artifacts are now being curated and will have a permanent home at the Chabad Jewish Center in Newport Beach.

Born Sept. 25, 1926, Moric Mermelstein was raised in a Jewish enclave in Mukachevo in what then was Czechoslovakia, and later Hungary after Adolf Hitler forcibly annexed the city. In 1944, he and the rest of his family were rounded up and taken by train to Auschwitz in German-occupied Poland, the largest of the Nazi death camps where more than one million people died, most of them Jews.

The only survivor in his family, he left Europe after the war and came to New York, where an aunt and uncle lived. When he married Jane Nance several years later, the young couple moved to Long Beach in search of warmer weather. He opened a lumber yard in Huntington Beach that specialized in making wood pallets.

In 1980, Mermelstein became aware of the Institute for Historical Review and its provocative offer to anyone who could prove Jews were slaughtered in the Holocaust. He responded with outrageous letters to the editor at the Los Angeles Times and the Jerusalem Post. In turn, the institute began to hound him.

“They really got in his face, sending him hair with blood on it in the mail, saying his parents were still alive and living under assumed names,” his daughter said.

Though some friends and other survivors urged him to ignore the group, saying chasing after the reward would only give needless attention to a ragtag collection of antisemites, Mermelstein took them to court instead, offering his 1979 memoir “By Bread Alone” and the writings of Nazi hunter Simon Wiesenthal and others as evidence.

After five years, with the mound of evidence now reaching 3 feet high, Los Angeles County Superior Court Judge Thomas L. Johnson put an end to it all, ruling the Holocaust was an indisputable fact.

“A judge, an American judge, stood up and said ‘Yes, the Holocaust is not subject to dispute,’” Mermelstein told Smithsonian Magazine in 2018. “That moment stands out in my mind. Now and forever after, the judicial notice stands.”

His legal fight to challenge those who dared change the narrative of the Holocaust was chronicled in the 1991 television movie “Never Forget” with Leonard Nimoy as Mermelstein.

His bigger rewards, his daughter said, were the legions of students who listened to his stories, as graphic and numbing as they might be, and came away inspired by his resilience.

“I have persevered,” she said.

In addition to his daughter, Mermelstein is survived by his wife of 60 years, Jane; children Bernie, Ken and David; five grandchildren and one great-grandson.