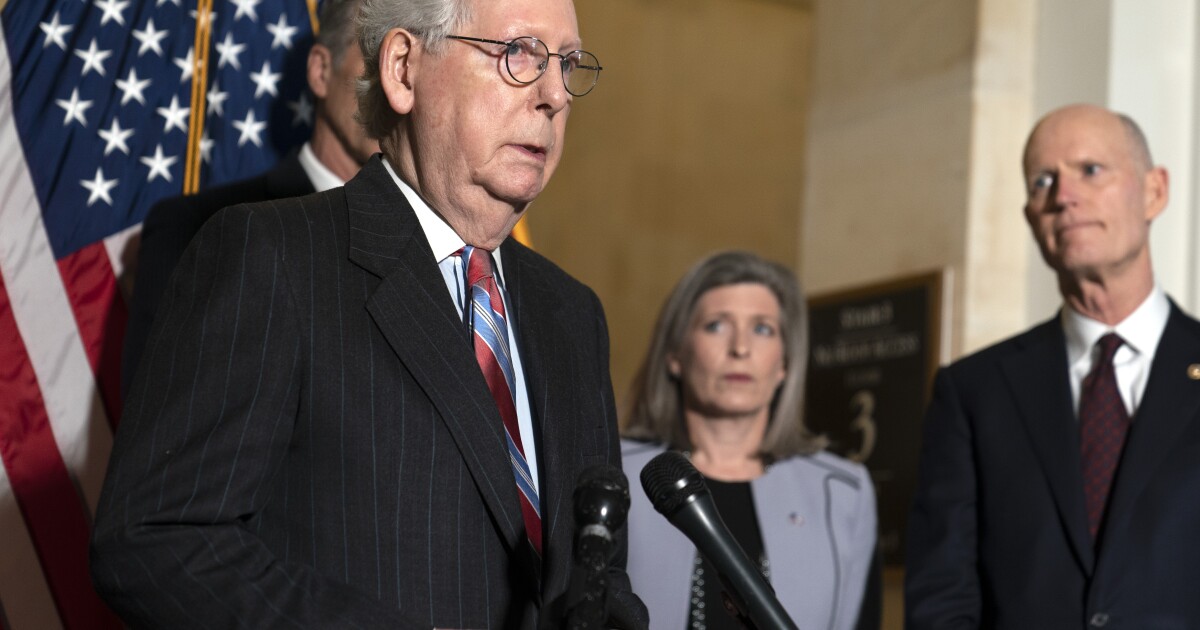 Senate Republican leader Mitch McConnell said Tuesday that it was “not the job” of the Republican National Committee to censor Reps. Liz Cheney and Adam Kinzinger for participating in the House investigation into the Jan. 6 Capitol attack, which he described as a “violent insurrection,” in contrast to the party’s resolution characterizing it as “legitimate political discourse.”

His blunt rebuke of the RNC’s actions sharply contrasted with the reaction of House GOP leader Kevin McCarthy, who told an NBC reporter Wednesday that the committee had the “ability” to issue the censorship.

The resolution’s continuing reverberations laid bare the unresolved tensions within the Republican Party between those who want to keep the focus solely on Democrats ahead of this year’s midterm elections, and President Trump and his loyalists, who want to punish his political opponents and revisit the 2020 presidential race.

Cheney, of Wyoming, and Kinzinger, of Illinois, have been particular targets of the former president’s ire for being the only two Republicans on the House committee investigating the Jan. 6, 2021, attack, in which a mob of Trump’s supporters overran the US Capitol in hopes of preventing the certification of Joe Biden’s victory.

the RNC’s censorship last week denounced the panel as a “Democrat-led persecution of ordinary citizens engaged in legitimate political discourse.”

Trump cheered the resolution on Friday, disparaging Cheney and Kinzinger as “RINOs,” for Republicans in Name Only, and stating that “the Republican Party would be far better off without them!”

But the censorship is proving to be a lingering headache for many Republicans, who are being pressed to explain whether they agree that Trump supporters’ violent actions at the Capitol on Jan. 6 were “legitimate.”

McConnell, speaking at his weekly Capitol Hill news conference, was unambiguous in describing that day.

“It was a violent insurrection for the purpose of trying to prevent a peaceful transfer of power, after a legitimately certified election, from one administration to the next,” he said.

In singing out Cheney and Kinzinger, the RNC broke from the norm of not getting involved in intraparty fights, the Kentucky senator said. “Traditionally, the view of the national party committee is that we support all members of our party, regardless of their positions on some issues,” he said.

McCarthy, stopped in a Capitol hallway Tuesday by a CNN reporter, said the party resolution was not referring to those who committed violent acts, but to six RNC members who have been subpoenaed by the committee though they were not at the Capitol that day. (The text of the censorship has no specific denunciation of the day’s violence.)

“Everybody knows anybody who broke in and caused damage that was not called for — those people, we said from the very beginning, should be in jail,” McCarthy said.

The congressman from Bakersfield later speed-walked away from an ABC News reporter asking about the resolution, saying she should make an appointment with his office.

The difference in tone from the two GOP leaders is partly a reflection of the constituencies of their chambers’ members: Ideologically gerrymandered House districts push many Republican representatives to cater to bases loyal to Trump, while senators run statewide and must appeal to a broader ideological swath of voters.

The former president has also been harshly critical of McConnell, despite the Senate minority leader’s statement one month after Jan. 6 that he would “absolutely” support Trump if he were the party’s nominee in 2024. McCarthy, meanwhile, has staked his bid for recapturing the House majority on maintaining a good relationship with Trump.

McCarthy was not present at Tuesday’s news conference for House GOP leadership. Rep. Elise Stefanik of New York, who became the No. 3-ranked House Republican after the party booted Cheney from leadership, said “the RNC has every right to take any action.”

“The position I have is: You’re ultimately held accountable to voters in your district, voters who you represent,” Stefanik added. “And we’re going to hear the feedback and the views of voters pretty quickly here this year.”

At the RNC meeting last week, officials focused on whether Cheney and Kinzinger should be expelled from the party or censored.

Once they settled on the latter, the phrasing about “legitimate political discourse” was added as an afterthought, according to an RNC member who requested anonymity to discuss internal deliberations. In hindsight, the member said, the resolution should have more clearly referred to people who were not at the Capitol during the riot.

RNC Chair Ronna McDaniel scrambled after the resolution’s passage to add that the phrase “legitimate political discourse” did not refer to the Capitol rioters’ actions.

“The RNC has repeatedly condemned all acts of political violence and lawlessness, including what occurred on Jan. 6,” an RNC spokeswoman said Tuesday in response to McConnell’s comments. “Unfortunately, this committee has gone well beyond the scope of the events of that day, and [that] is why the RNC overwhelmingly passed a resolution censuring Liz Cheney and Adam Kinzinger.”

McDaniel later wrote an op-ed for the conservative news site Townhall blaming the media for “shameful, outrageous, and patently false coverage” of the resolution.

Still, it was fellow Republicans, including McDaniel’s uncle, Sen. Mitt Romney of Utah, who denounced the resolution.

“To suggest that a violent attack on the seat of democracy is ‘legitimate political discourse’ is so far from accurate as to shock and make people wonder what we’re thinking,” Romney told reporters Monday.

Asked whether the censorship could harm Republicans’ efforts to retake Congress this year, Romney said: “Anything that my party does that comes across as being stupid is not going to help us.”

Sen. Josh Hawley of Missouri agreed that the debate did not help the GOP’s cause, but said that “DC Republicans” criticizing the party’s actions were the ones causing damage.

“Whatever you think about the RNC vote, it reflects the view of most Republican voters,” Hawley told reporters at the Capitol on Tuesday.

Ron Nehring, a former Republican National Committee member from California, predicted the brouhaha will fade from voters’ memories long before the November election.

“I think Joe Biden and Kamala Harris have handed the Republican Party a wonderful set of issues to run on,” he said, listing topics such as inflation and the withdrawal from Afghanistan. “Those are overwhelmingly winning issues for the Republican Party, and that’s where the focus should be.”