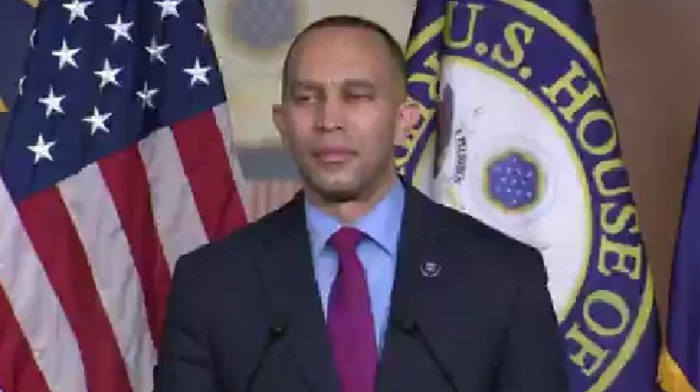 Table Of Contents hide
1. Democrats will try to take credit before the midterms
1.1. Support conservative voices!
1.1.1. Sign up to receive the latest political news, information and comments sent directly to your inbox.
2. It’s science!
3. Like this:


You always knew this day would come. The inevitable twist in which Democrats would take credit for lifting their own COVID restrictions.

In what could be the opening shot at the tactic, Congressman Hakeem Jeffries credited President Biden’s “leadership” in having mask mandates relaxed in several states, despite the White House insisting a day earlier that masks mask rules are still in effect.

Jeffries made the comments during a news conference Tuesday when he was asked to comment on the idea that Democrats may be accelerating a loosening of pandemic rules as the midterm elections approach.

“Job creation is up, wages are up, unemployment is down, and the Omicron variant is in retreat,” said the New York Times. Democrat said.

“And that is not by accident. That’s because, under the leadership of President Biden, a public health infrastructure was put in place,” he stated, “to ensure that we can do everything we can to crush the virus, and that’s what has been happening.”

.@RepJeffries credits Biden for states that removed mask mandates: “That’s because, under President Biden’s leadership, a public health infrastructure was put in place … to ensure that we can do everything we can to crush the virus, and that is what has been happening. pic.twitter.com/FDjJrjA7aB

Democrats will try to take credit before the midterms

There is a great deal of mental gymnastics one has to perform to claim that President Biden deserves credit for lifting mask mandates in various states.

Liberal governors in the states of New Jersey, Delaware and Connecticut have chosen to end mask mandates for school children in their own states.

New York Governor Kathy Hochul is expected to announce a similar move for businesses in the Empire State, but she will reportedly keep masks on school children.

While the rest of your fellow blue state control freak governors are announcing the end of their mask mandates, Kathy Hochul is now reported to be EXTENDING New York’s mask mandate on children as young as TWO. This is child abuse and illegal. #UNMASKOURCHILDREN

The biggest hurdle in Jeffries’ epic Olympiad of Jedi mind tricks is the fact that the administration itself insisted a day earlier that mask mandates should remain in place.

“We recommend masking in schools. That is the CDC recommendation,” White House press secretary Jen Psaki said at her daily briefing on Monday.

The Biden “leadership” is literally telling everyone to stop relaxing mask mandates, but Jeffries is trying to convince the American people that, to quote Jim Carrey on Liar Liar“The damn pen is blue!”

Mark my words: This gaslighting will only continue as the Democrats try to avoid a red wave in 2022.

Rep. Hakeem Jeffries’ comments come as CNN medical analyst Leana Wen conceded that the decision to wear a mask should be moved from a government mandate to an individual choice.

“I’m not saying … that no one should wear masks, but rather that the responsibility should move from a government mandate imposed by the state or the local school district, rather it should move to an individual family responsibility,” he said. Wen. .

“The science has changed,” he says.

“Science has changed.” @DrLeanaWen explains why he supports lifting some pandemic restrictions and believes the decision to wear a mask should move from a government mandate to an individual choice. pic.twitter.com/vaiybBBF2b

Jeffries is considerate the favorite replace House Speaker Nancy Pelosi as Democratic leader when she decides to step down.

Those plans could be on hold with Pelosi, 81, recently announcing she would run for reelection for another term late last month.

Jeffries once claimed that all the racists in America supported Donald Trump for president.

“Many of us wonder, why did so many people who worshiped at the altar of white supremacy find themselves drawn to the Donald Trump campaign?” Jeffries asked. “We know that every racist in America voted for Donald Trump.”

In addition to touting Biden’s “leadership” in lifting mask mandates, Jeffries also claims the president “leaned toward science” when it came to vaccines.

“That doesn’t happen by accident,” he added. “Because President Biden and Democrats in the House and Senate have relied on science, on evidence, to build robust public infrastructure, and now we are seeing the fruits of that labor.”

Leaning on science led leader Biden to claim that Americans were vaccinated couldn’t get sick or end up in the hospital with COVID.

Biden on CNN: “You are not going to get covid if you have these vaccines.” pic.twitter.com/d7V8W7ooh7

No one leans toward science on the Democratic side of the aisle. They lean towards the polls. And the polls tell them that people are fed up with mandates.

And if people remain disillusioned ahead of the midterm elections, it will be a bloodbath for the resistance party. It doesn’t matter how many lies they tell the American people.

The resounding failure of the polls underpins Bolsonaro’s conspiracy theories