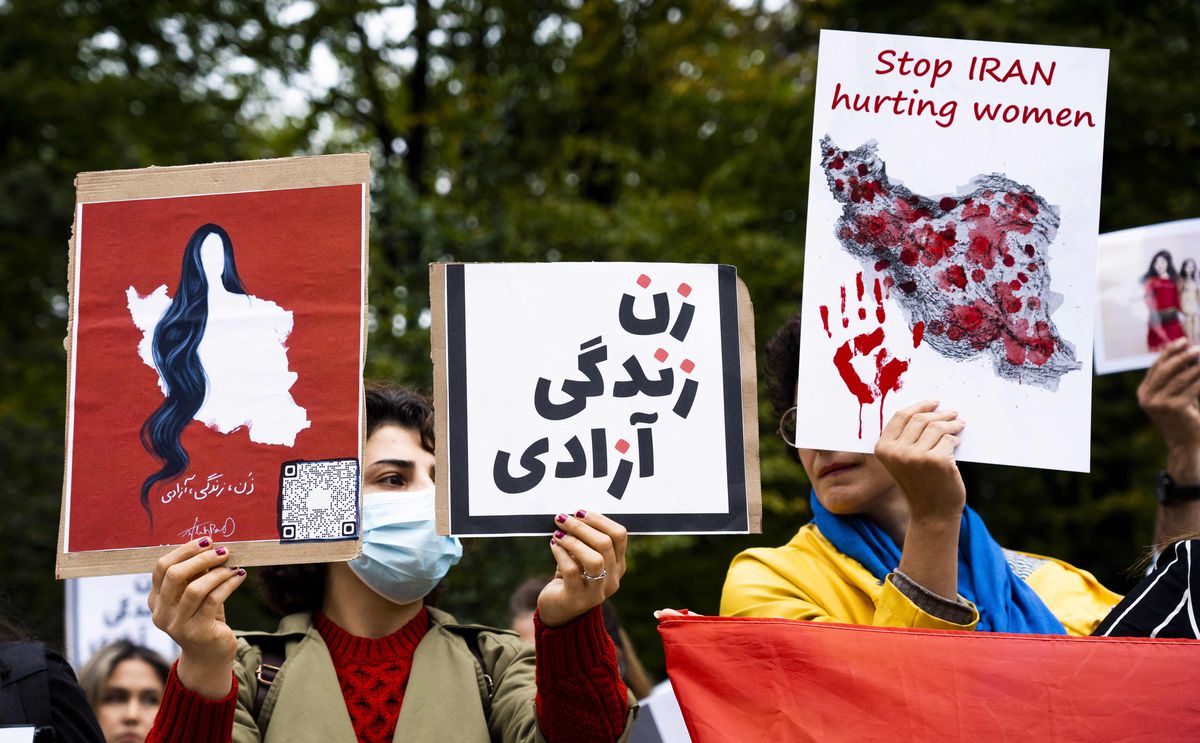 
“Keep on the veil or we’ll kill you.” Kosar, a 24-year-old fine arts student, was scolded by an older man on Wednesday when he was returning to Tehran with these words. He was returning from one of the many demonstrations that originated in the country, Mahsa Amini, 22, died on 16 September. The girl died in police custody after being arrested for not wearing a veil properly and showing some part of her hair. Student Kosar had taken off his scarf in protest and did not feel like wearing it back. ,the system feels threatened”, he concedes, “This outbreak is the result of an unbearable oppression that affects all of us, men and women, though it is the women who are leading the movement. I’ve never seen roads like this before, but we must that the world doesn’t leave us,” he says via Telegram.

After a week-long protests in Iran, the Islamic government has tried to appear on the street this Friday. It has done this by calling rallies in favor of the Ayatollah’s rule and Islamic law. “They always use this method: they have enough money to put on fake performances in support of their radical ideas,” Behnum, 38, artist and activist, also explains on Telegram. “They organize this show at least once a year and always raise slogans against the United States. On this occasion the government wanted rallies to be held in the main cities after the Friday prayers. Everyone knows that They are a liar”, is speaking this man from Isfahan.

Those called by the regime, have drawn a link between protests over the young woman’s death with the United States and its allies. “Murder America. Death to Israel”, chanted supporters of nothing to change from Tehran University and then cheered on the Iranian Supreme Leader, Ali Khamenei, and his predecessor Ruholla Khomeini, in office since 1989. ,[Los manifestantes] They are attacking our women’s chadars.” He said, “God ordained that women wear hijabs.” On Friday, the concentration remained calm without violence. Repression demonstrated in protests mobilizing thousands of civilians In several dozen cities and in which dozens of people have been killed: 31, according to the NGO Iran Human Rights and 17, according to official media.

“There are still protests, but there are many security personnel on the streets,” says activist Behnam. “The Iranian system can be very repressive; The state is strong and people are scared. I have,” he says. A few years ago, she was arrested for participating in a feminist demonstration. She was beaten up, whose body is visible with scars.

A leading woman challenging the regime was Vida Movahead. On December 27, 2017, this woman took off her scarf and tied it to a stick on Engelab Street in Tehran, and waved silently. She was single and her gestures – so simple and so risky at the same time – made her a symbol of the fight against the compulsory hijab. His feat lasted only a few minutes; Until a man pushed him and threw him on the ground. He was sentenced to one year in prison. “The world thinks that these protests are about the hijab, but it is not. Women in Iran have far more serious problems than the veil”, says Yasman Khaleghiyan, a 33-year-old journalist and activist who has been deported to Canada since 2020. “The government does not allow us to have abortions, we cannot leave the country without the permission of our husbands or fathers, we do not have the right to enter the stadium and if a man kills his daughter, he is only a few years old. Punishment will happen because there is no law protecting women,” says Khaleghiyan, who worked for years Sharghi, the most important reformist daily in Iran. He left his country thinking that his life was in danger because of his criticism of the government.

Three years ago, Iran also saw powerful civilian protests In which hundreds of people were killed and the authorities did not take responsibility. Then, a rise in the price of gasoline caused the population to grow – the country with the world’s main oil reserves – and the devaluation of its currency, the rial. But this explosion is different. Never before had so many women – many young people – exposed their veils in public. In contrast to the concentrations in support of the Ayatollah, which were formed mostly by men. Didn’t even dare to burn clothes in front of everyone and government buildings. “We are protesting against many young women; “We are angry and angry,” says Marian, 24, from Tehran. It describes women who come with friends, brothers, parents or lovers to support the clamor of Iranian women. “The difference between these protests and the previous protests is not the female presence; We have always fought with men”, believes an Iranian journalist exiled in Canada. “The difference is that these protests, born with the pain of Masha’s murder and the veil as the protagonist, have become commonplace and have included all sectors of society,” he explains.

The pressure that Iranian women face is incomparable to the pressure they put on men. Although they also suffered from a lack of freedom, girls born 10 or 20 years after the Islamic Revolution were never able to leave the house without scarves, miniskirts or short sleeves. Their mothers never imagined that the victory of the revolution would lead to four such dark decades. In this rebellion all that collective anguish has intensified. “We do not have a leader of the revolution. There are no politicians here. We are people and we need the world not to forget what is happening”, claims 25-year-old Nilofer. He speaks on Telegram and from his home in Tehran. “The internet will be cut off at any time,” he warns. She completely understands how Mahsa Amini must have felt after being arrested: a few months ago she was arrested by the Moral Police for not strictly following the Islamic dress canon.

“I will never forget the fear and stress I felt when I was taken into custody. It’s a feeling I can’t erase,” says Niloufer. He also condemned the “indescribable” political corruption that existed in the country and said that Hundreds of thousands of people have been pushed into poverty. “There are many women with university degrees who do not have jobs. Not even our fellow men. And this is unacceptable in a country rich in Iran’s wealth.” For his part, activist Behman also believes this uprising is different: “Civil culture has changed. Previously, families imposed conservative Islamic rules for their children at home, but not now: we have come together to fight against Islamic dictatorship. Of course, the repression has also become harsh and cruel: we have lost our youth and now, our blood and our bodies.

Iranian women have never been in the background when it comes to expressing the plight of the population. In 1979, when the new government announced that the veil would become a mandatory garment, they protested en masse. Therefore, they shouted that they had not participated in a revolution to return. The forced veil was followed by a humiliation of many rights which they had acquired during the rule of Shah Mohammad Reza Pahlavi, who tried to modernize a country suffering from severe social inequalities. Over the years, a less strict method of wearing the hijab has become more widespread, while campaigns have sprung up from abroad encouraging Iranian women to publicly oppose its mandatory use. name of movement white wednesdayWhich invites you to wear the white veil on Wednesday was promoted by Masih Alinejad, an Iranian journalist based in the US.

“We need the world not to abandon us. We’ve always been alone. When it comes to Iran the West looks elsewhere. Please don’t leave us”, asks 24-year-old student Kosar. A clamor that is shared by many expatriates and deportees from abroad. Meena Joshighani is one of them. He lives in the UK, but till 2019 he was working as a journalist in Iran. She went to London to study and is now a well-known voice on the BBC’s Persian channel. Working in a British series prevents him from returning to Iran with a security guarantee, so when he wants to see his family he does so in Istanbul. “These days people in the street are shouting: ‘From Kurdistan to Tehran, how far do you want to suppress women in Iran? It seems that this time the women have decided not to stop and this is a sign of that. That’s how fed up they are with not getting freedom. People are no longer afraid, they can’t bear it anymore,” says Joshghani.

The feeling that something has changed is shared by 33-year-old Yasman Khaleghiyan: “I have participated in street demonstrations since I was 18, and I can assure you that the performances of the past few days are unparalleled. So much unity. I had not seen till date. This may be the first step to abolish the hijab law”, says the journalist, who wishes she could participate in the riots. Despite the speed of the protests, many women fear that some And they are confident that the world will not leave the Iranians alone. Not at this time.