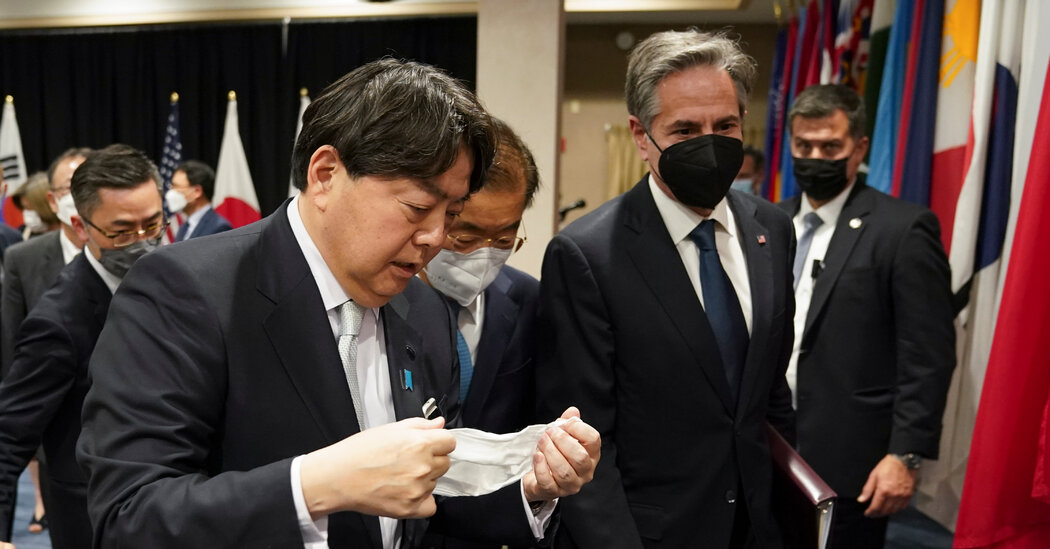 HONOLULU — Secretary of State Antony J. Blinken and the foreign ministers of South Korea and Japan presented a united front against North Korea on Saturday. recent missile teststhat the country has been performing at its fastest pace in years.

“I think it’s clear to all of us that the DPRK is in a provocative phase,” Blinken told a news conference in Honolulu after an afternoon of meetings. He said the three countries “will continue to hold the DPRK accountable,” using an abbreviation of North Korea’s formal name, the Democratic People’s Republic of Korea.

But all three officials said their governments were open to talks with the North, even as they condemned the recent tests. “We reaffirm that diplomacy and dialogue with North Korea are more important than ever,” said South Korean Foreign Minister Chung Eui-yong.

Blinken’s appearance with Chung and Yoshimasa Hayashi, the Japanese foreign minister, was meant to be a key moment in the Biden administration’s efforts to defuse a potential crisis with North Korea.

The governments of South Korea and Japan have recently had disagreements over how to deal with the North. Seoul wants to offer more diplomatic incentives to Pyongyang, while Tokyo advocates a tougher line, veering more toward tougher United Nations sanctions.

So far this year, North Korea has conducted seven missile tests, more than in all of 2021.

Officials in the United States and its allies were particularly alarmed by the north january 30 testthey said was from an intermediate-range ballistic missile, the most powerful missile the country had tested since 2017. It raised the specter of a return to tensions from President Donald J. Trump’s first year in office, when the North tested long long-range missiles and a nuclear device, and Trump threatened to unleash “fire and fury” in return.

Kim Jong-un, the North’s leader, recently suggested he might end a self-imposed moratorium on testing such powerful weapons. Last month, North Korean state media said Kim had ordered officers to “promptly examine the matter of restarting all activities that had been temporarily suspended,” presumably a reference to the moratorium.

Some analysts said Kim and other officials may have already decided on a course of action, but their intentions remain a mystery.

“We have data points. We have a lot of bones, but we don’t know how the skeleton fits together or which way it’s going to go,” said Robert Carlin, a former US intelligence analyst on North Korea.

The meetings in Honolulu were aimed not only at discussing North Korea, but also at trying to defuse tensions between Japan and South Korea, with the United States playing the conciliator.

The two countries have long-standing disagreements over historical issues stemming from World War II and Japan’s former status as South Korea’s colonial ruler. In November, Mr. Blinken’s deputy, Wendy Sherman, met in Washington with her counterparts from both countries, but conflicts between South Korean and Japanese officials prompted her to give an awkward solo news conference after her.

By that measure, the news conference in Honolulu on Saturday was an improvement, though the three officials said nothing of substance about tensions between Japan and South Korea. They discussed growing friction in the region over China’s territorial claims and what some see as its economic coercion of smaller neighbors.

But the immediate problem was North Korea. Mr. Chung underscored South Korea’s President Moon Jae-in’s belief in the importance of diplomatic rapprochement with the North. Mr. Moon, who helped bring about the historic direct talks between Mr. Kim and Mr. Trump, hopes to make inter-Korean reconciliation a centerpiece of his legacy.

South Korea has presidential elections in March and Moon’s successor could take a different approach. US officials say they are closely monitoring the candidates’ positions toward North Korea.

Mr. Hayashi emphasized that Japan was also open for diplomacy and reiterated that Prime Minister Fumio Kishida was ready to meet with Mr. Kim without preconditions, a position taken by the leaders of the three nations. But he said North Korea also had to address certain critical issues for Japan, including its past kidnappings of Japanese citizens.

Last month, after North Korea began its latest series of missile tests, the State Department asked the United Nations to impose new sanctions on the country. But China and Russia blocked the proposal.

US officials say they have tried various ways to reach out to North Korea in hopes of restarting diplomacy, which has stalled since a failed summit between Trump and Kim in Hanoi, Vietnam, in 2019. But they said they had heard nothing. . North, which has closed itself off from the outside world even more than usual since the pandemic began.

“We do not have any hostile intent towards the DPRK,” Blinken said on Saturday. “We remain open to dialogue without preconditions if Pyongyang chooses that path.”

Mr. Blinken’s stop in Hawaii was the last of a week-long tour of the Asia-Pacific region, following visits to Australia and fiji. The aim was to emphasize that Asia is in the middle of President Biden’s foreign policy.

Why is the leftist Lula the favorite to win the Brazilian presidential election?