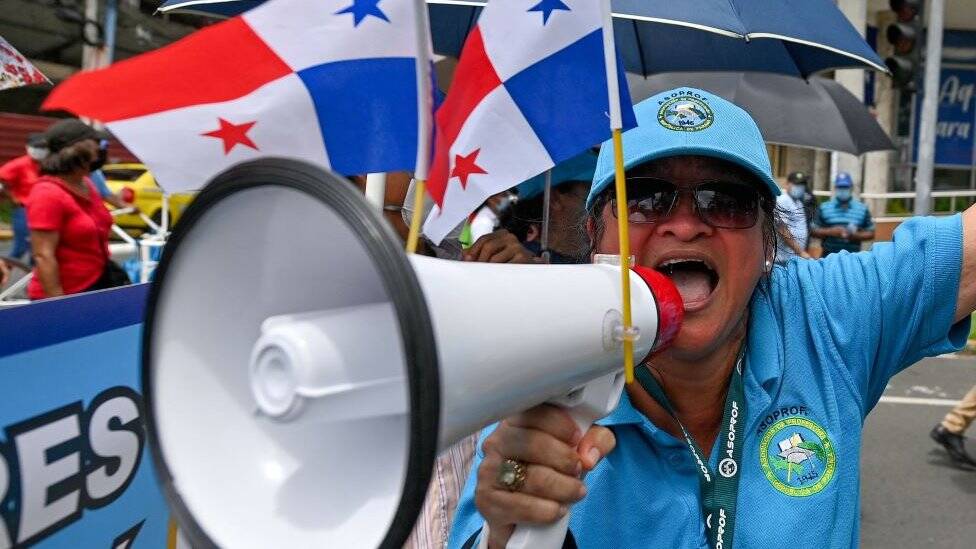 
When the governments of Latin America tried to reduce gasoline subsidies, the streets were filled with demonstrators protesting the hike in fuel prices.

Countries such as Ecuador, Panama and Peru have experienced this year, which have faced strong opposition to raising prices for products such as gasoline or diesel, amid a wave of world-wide inflation.

And despite the fact that it entails a strong political risk, Colombian President Gustavo Petro recently declared: “We tell gasoline consumers that we will return to the path of price hikes, and aim to do more than that.” Nothing will happen to reduce the accumulated losses irresponsibly”.

Colombia is the third country after Venezuela and Bolivia with the lowest petrol prices.

The government argues that the problem is that the fiscal deficit is unsustainable, which is why it has proposed an ambitious tax reform with which it hopes to increase revenues and is trying to reduce spending in other sectors, such as gasoline subsidies. In terms of an environmentalist agenda and amidst inflation exceeding 10%, the highest since 1999.

We tell gasoline consumers that we will return to the path of price hikes, and this will aim for nothing more than to irresponsibly reduce accumulated losses. We will not touch on ACPM derivatives.

Promoting a measure considered highly unpopular and that would have a direct impact on the most vulnerable households in a country where poverty reaches 39% of the population, Petro seeks to cut money invested in subsidizing gasoline with a social rationale : “Is it worth it. When infant mortality due to malnutrition doubles is it worth subsidizing gasoline for 40 billion?

Last week the government announced that the price of gasoline would increase by about five cents per gallon (1 gallon equals 3.79 liters) every month from October. Diesel subsidy will continue.

Critics argue that a reduction in gasoline subsidies would impact the most vulnerable households and increase poverty at a time when the country’s economic situation is dire.

Like Colombia, the rest of the countries in the region apply some form of subsidy on gasoline, diesel or other fossil fuels such as oil, coal or gas.

How do these subsidies affect public finances?

It depends on how you measure it, but experts agree that subsidies account for a substantial portion of countries’ fiscal spending.

According to the United Nations Development Program (UNDP), from a global perspective, governments spend about US$423 billion every year to subsidize the consumption of fossil fuels.

This means, the agency argues, that for every dollar committed to mitigating the effects of the climate crisis, four dollars are spent on fossil fuel subsidies.

“It is clear that subsidies on fossil fuels are not a rational use of scarce public funds,” said Pradeep Kurukulasuriya, director of the UNDP’s Department of Nature, Climate and Energy. “It doesn’t make economic sense.”

What type of gasoline subsidies apply in Latin America?

Whether this is because a country has a deep fiscal deficit, or because it seeks to promote a less polluting agenda (or both), the issue of subsidies for fossil fuels, including gasoline and diesel, has been at the center of debate because reducing or Eliminating them hurts consumer wallets in the short term and could have far-reaching political ramifications, experts say, as seen in Latin America.

Even without a proposal to reduce subsidies, minimal changes to public transport fares, for example, could trigger a social explosion as in Chile in October 2019, with protesters protesting inequality in the country Were.

Subsidies are not the same in all countries. There are consumer subsidies that try to keep the price paid by consumers below the market price, and others that work to reduce the cost to producers through contributions.

Gasoline is subsidized in all countries of the region through a variety of mechanisms that may include direct subsidies through state-owned companies, stabilization funds, tax cuts, fiscal exemptions or some form of price control.

Irrespective of the mechanism implemented, subsidies basically attempt to partially separate the price paid by the end consumer from the market price.

What happens in the largest economies of the region?

And in more general terms, quasi-state oil company Petrobras is also helping to skyrocket prices, as is the case with YPF in Argentina, which is 51% owned by the state.

In the South American nation, a rise in the dollar, along with several other factors, has made it more difficult for the government to reduce energy subsidies, a point the International Monetary Fund (IMF) has emphasized in terms of financial payments. Commitment is the country.

Mexico is a major oil exporter, and the government announced that the tax on the fuel would be 100% subsidized.

Countries such as Colombia, Peru or Chile have fuel price stabilization funds, known as FEPC in Colombia and Peru, and MEPCO in Chile.

These are funds that aim to keep fuel prices within a certain margin to reduce the volatility in international prices.

Peru, for its part, extended the deadline for the distribution of subsidies through its fund to stabilize prices.

And what happens in other Latin American countries?

Countries such as Venezuela, Cuba, Nicaragua or Bolivia subsidize gasoline as part of a general policy of price controls and tax subsidies that characterize these Latin American economies.

A complicated situation has been faced by countries such as Ecuador and Panama, which this year failed to implement subsidy cuts after massive protests that sought to retain financial aid.

Other countries, such as El Salvador, Honduras or Guatemala, have implemented both traditional subsidy policies or freezing rates in recent months in terms of inflation.

The Dominican Republic has also implemented a mixed system of subsidies and rate freezing, while in Costa Rica this system works through pricing.

In Uruguay, the Latin American country with the highest gasoline prices, the government prevents further increases in tariffs through pricing imposed by state oil company ANCAP, while in Paraguay the government and trade unions are currently trying to agree. How to deal with the issue of subsidy after several days of demonstration

How are the prices in Latin America?

Prices are undoubtedly lower in oil producing countries and countries with the highest subsidies.

What about the world’s energy crisis and environmental goals?

With the idea of ​​mitigating the effects of climate change, international organizations have been campaigning in recent decades for countries to meet their commitments to reduce greenhouse gas emissions.

One of the central points of discussion is whether to reduce or eliminate subsidies for fossil fuels.

However, with the economic recovery following the pandemic and the effects of the war in Ukraine, this goal is increasingly being overcome in parts of the world, such as Europe, which is currently mired in a deep energy crisis.

Major world economies have dramatically increased support for the production and consumption of coal, oil and natural gas, according to an analysis by the Organization for Economic Co-operation and Development, with households looking for alternatives to protect themselves from rising energy prices. The Economic (OECD) and International Energy Agency published in late August.

In fact, in 51 countries, government support for fossil fuels nearly doubled in 2021, and the study estimates subsidies will increase even more in 2022.

Faced with this situation, the IEA’s executive director, Fatih Birol, argued that the “only sustainable solution” to the energy crisis and the best way to mitigate the effects of the high prices paid by consumers was “increased investment in clean energy”. ” Is. technologies and infrastructure.

However, in Latin American countries, given the geopolitical and supply conditions affecting the world, most governments are urgently trying to contain inflation, before moving forward in the energy transition.

Remember that you can receive notifications from BBC Mundo. Download the new version of our app and activate it so you don’t miss out on our best content.