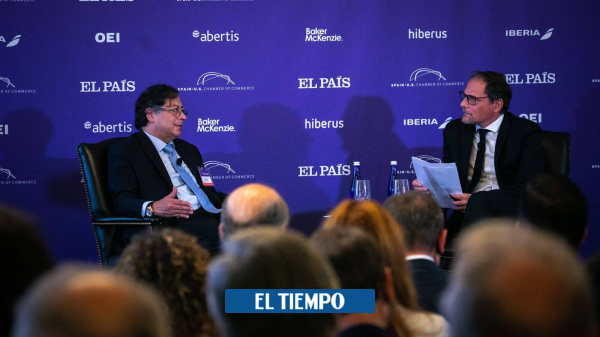 President Gustavo Petro is advanced in an agenda in New York (United States) that involves different sectors; however, he did not miss the opportunity to refer to the “new direction” that the drug trafficking in the country, in the region and also the course that the negotiations with the ELN could take.

During the Forum ‘Latin America, the United States and Spain in the Global Economy’, the president assured that “the drug trafficking proletariat is increasingly aware that it is playing the role of a fool” and pointed out that within the multi-crime structures there are those who they want to bet on ‘total peace’.

Petro revealed that the negotiations with the ELN they are being resumed from the process and the point at which the government of former president Juan Manuel Santos left off, so in that measure it is intended “to re-establish protocols, re-establish the guarantor countries, continue where he suspended ”.

He also pointed out that drug trafficking and illegal profits from this activity are leaving the country and are making their way through multi-crime organizations, according to what he said, the vast majority have a new origin.

It is no longer the time of Pablo Escobar

“The multi-crime organizations have left Colombia with a kind of international division of labor, which is to produce the coca leaf and have the “armed force”that takes care of those routes. But the wealth, which is the objective of the business, remains outside, ”Petro indicated during his intervention.

The president went further and affirmed that “it is no longer Pablo Escobar’s time” in Colombia, since he considers that currently the “drug trafficking proletariat” is going through a more complex situation. “Now, they put the dead and the wealth is left out. That gives an opportunity.”

Petro pointed out that the different “multicrime” structures in the country have sent letters to the National Government to open negotiations and proceed with a “dismantling.” He even said that some of these organizations have expressed interest in betting on the vision of “revitalizing the jungle from where they are.”

“This multicriminality crosses borders. It no longer even has origins in Colombia, as in the past. The processes of valuation of illegal economies, which are strong because they are illegal, are no longer within Colombia. That’s an opportunity I’m betting on,” she added.

In this way, the head of state stated that the members of the multicrime structures have the possibility of negotiating with the justice system, since he said that they are showing that “there are ways of legal benefit to end their illegal activity.”