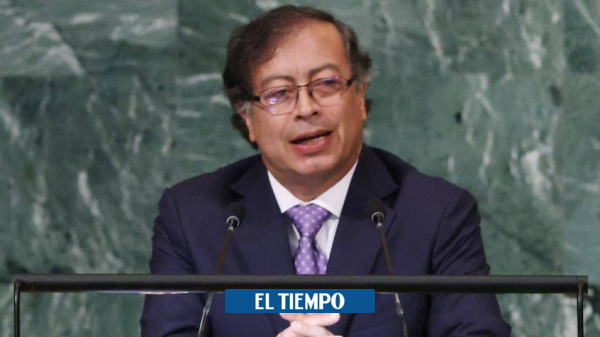 Table Of Contents hide
1. The president spoke about what the negotiation with armed groups and drug traffickers would be like.
1.1. Petro spoke about the invasion of land
1.2. Receive the best information in your email from national news and the world
1.3. Like this:

Gustavo Petro, in a speech at the UN Assembly.

Gustavo Petro, in a speech at the UN Assembly.

The president spoke about what the negotiation with armed groups and drug traffickers would be like.

President Gustavo spoke from the United States with Noticias Caracol about how he plans to advance his initiative to achieve what he has called “total peace” in the country. A negotiation that would not only include illegal armed groups, but also criminal gangs and drug traffickers.

(Can read: Gustavo Petro: what comes after the announcement of the multilateral ceasefire?)

The president made a strong comment in this regard against former president Iván Duque. “The dissidents were built by Duque, with the respect he deserves. He built the dissidents. The objective was to rebuild the FARC so that the discourse of war would continue to exist,” he assured.

He also pointed out that “The policy of destroying the peace process built dissidence.”

He also stated that: “The owners of drug traffickers have no camouflage. They have political and economic power. If intelligence stops where cocaine turns into money, we will be more effective there and that is where I want to take the issue.”

He referred to the case of Santrich, who abandoned the peace process and returned to arms, insisting that what happened was an “entrapment.” He even stated: “it is shown that there was a kind of trap to ask for their extradition in the United States. Made by an attorney general of the nation. A trap. The cocaine from the trap was bought with money from the DEA, delivered by people from the DEA and received by them. It turned out to be a trap that has been confessed today by members of the DEA in the United States justice system.”

Petro spoke about the invasion of land

Regarding the problem of land invasion, he said that the State is not going to allow civilians to organize themselves to protect their lands. He explained that the law allows the owners of the land, and if they prove to be so, “order the police to remove the invaders. You don’t even have to go through the local authority. That has happened every time. In each neighborhood, In every city you see stories like that because you don’t even need the State to give the order, it’s the legitimate owner who can give the order to the police.”