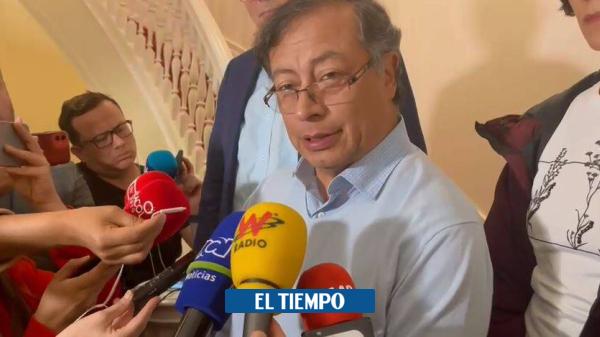 Gustavo Petro, the president of Colombia, ended his agenda in the United States with a participation in the United Nations and other multilateral meeting spaces with leaders from around the world. At the end of that activity, Petro affirmed that they are in the “prelude” for negotiations with the ELN to begin.

Petro stated that in recent weeks and for nearly two months progress has been made in exploratory meetings with the armed group of the Eln and, to that extent, considers that “in a matter of days” the process of dialogue and joint negotiation will begin from the National Government.

(Grass: President Gustavo Petro announces that he will propose a ‘multilateral ceasefire’)

“There has already been an official contact between government officials, the delegates to this type of issue, the High Commissioner for Peace with members of dissidence. It is a matter of days and in a matter of days a public issue will be raised, the possibility of a multilateral ceasefirePeter said.

The President assured that with this process of multilateral cessation “the beginning of the end of violence in Colombia would take place”, in addition, he confirmed that all groups outside the law will be able to join and from the Military Forces all kinds of counteracting actions.

(We suggest: Gustavo Petro denies that he was going to meet with Joe Biden: ‘There was no appointment’)

In this way, the president made it clear that the proposal to stop the fire does not mean that the Armed Forces are going to give up their operational activities in the territory, on the contrary, he stated that the intention is that they can reach the regions and territories in the country where there is a strong subversive presence.

In that line, Petro also referred to the problem of land occupations that has occurred in the country by peasants, ethnic groups and other social actors, the president assured that land restitution will be strengthened budgetarily “so that we do not take a century to repair the victims.”

“That restitution of land to its legitimate owners must be done within a few years and we can then return to normality in that aspect,” he said.