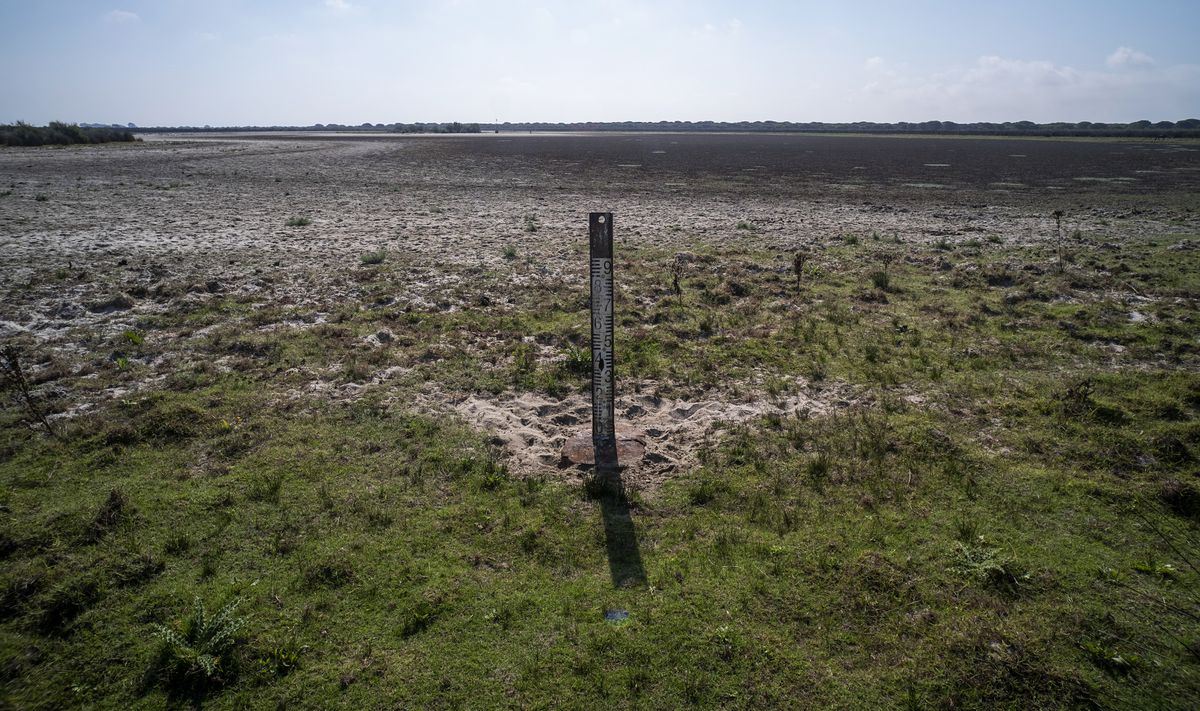 
Poor water management in Spain has been in the sights of the European Commission for years. And the extreme situation that Doñana is experiencing has once again activated the alerts in Brussels, which threatens to bring Spain to justice again for not defending one of the most emblematic protected areas in the country. With the images of the Santa Olalla lagoon (the largest wetland in Doñana) completely dry At the beginning of the month, touring the European media, the central government and the Junta de Andalucía have just sent the European Commission a joint action plan.

Both administrations, with shared responsibilities in this matter, intend to prevent the country from being sanctioned for not controlling the pressure exerted on the aquifer from which the protected area lives, threatened by illegal extractions for agriculture and the macro-urbanization of Matalascañas, belonging to the Huelva municipality of Almonte.

At stake is a foreseeable sanction from the EU Court of Justice. Spain ranks first among The European countries with the most open infringement files for environmental issues and he knows well the consequences of these files reaching the end. This is the case of the lack of purification of urban wastewater in several population centers that has already accounted for 74.85 million since the sanction was imposed in July 2018 for breaches of the norm in 17 agglomerations. It is the largest community fine that Spain has ever had to face. As long as non-compliance persists in the municipalities for which the country was convicted, the fine continues to grow every six months. There are still four of those 17 nuclei without solving their problems and the last treatment plant of this file that will be in operation will not do so before 2026, according to the most recent communication that the Government has sent to Brussels. It is precisely that of Matalascañas, which now discharges its sewage with insufficient treatment through an underwater outfall in front of this Biosphere Reserve.

Apart from the deficient purification, Spain has had another file open since 2014 for the extraction of water in the Doñana aquifer. In the summer of 2021, the Court of Justice of the EU handed down a conviction in which he criticized the lack of control over the withdrawal of water by the strawberry growers and from the municipality of Matalascañas. But that sentence did not carry a sanction, a letter that the Commission had kept.

However, last February the European Director General for the Environment, Florika Fink-Hooijer, threatened Spain by letter with taking him back to court after meeting the plan of the Andalusian right to increase the irrigation of the strawberry greenhouses near the reserve, now parked by the Andalusian PP due to the serious drought. The plan went in the opposite direction to the fulfillment of the sentence of the magistrates of the court based in Luxembourg, who demanded to immediately correct the damage to the “overexploited” Doñana aquifer.

A year and a half has passed since the ruling and the critical situation of biodiversity in the wetland is approaching a point of no return, scientists warn. To reverse it, now the Ministry for the Ecological Transition and the Board have put aside their differences and have presented a joint package of corrective measures to Brussels. “This time we have gone hand in hand and we are not stepping on each other’s necks, that is a significant change because in the end the bad reputation is for Spain. There has been a difference between the drafts of six months ago and now, ”said the Andalusian deputy councilor, Sergio Arjona, on a visit to tour the reserve last Thursday. The significance of the ministry’s measures far exceeds those of the Board.

The ministry proposes a battery of 20 measures that total 114 million investment. In this sum, the Government includes large water infrastructures to improve the state of the aquifer, such as the transfer of surface water from the Tinto and Odiel river basins to the Guadalquivir and the expansion of the Agrio river reservoir, for 45 million. Ecological Transition highlights the actions planned to minimize the damage from Matalascañas, such as the new treatment plant, as well as the closure of the two surveys that affect the wetlands closest to the macro-urbanization.

In addition, there is the action to close 1,143 illegal wells in the greenhouses near the reserve carried out by its environmental agents, a mathematical model to simulate how the aquifers evolve and the automation of the 114 wells that measure their level, today below minimum levels. Lastly, the ministry rescues actions still pending from the Doñana 2005 project for 16 million, which gives an idea of ​​the investment delay accumulated by the Administrations to take care of the reserve.

The Board puts the focus for its part on the creation of a technical scientific working group to clarify how the lack of surface and underground water affects the ecology of Doñana, as well as a study to verify the effect of water extractions – legal and illegal—to protected habitats, among other measures. In addition, it plans to establish “habitat tolerance thresholds” with respect to water levels.

In its proposal, the Board does not address the main problem at the moment: illegal wells, which proliferate despite the fines of its own environmental agents and those of the Guadalquivir Hydrographic Confederation, dependent on the ministry. The fundamental stumbling block is the lack of coordination, since when the confederation closes a well, shortly after the farmer punctures another and the Board does not force him to dismantle the structure of the greenhouse that allows him to continue with his berry business. When a farmer is denounced, the final action of the justice system to intervene and close down the farms takes between six and seven years.

The director of the Doñana Biological Station (belonging to the CSIC), Eloy Revilla, lamented on Thursday from Santa Olalla – which now accumulates a small puddle of 200 square meters – the “lack of governance”. “The Ministry of Agriculture should coordinate with the water police because it is a complex and structural problem. In the end, what will happen? The towns will be left without water, the aquifer will be salinized and, then, neither water nor town. We cannot wait for an environmental disaster to act.”

The delay that the Board accumulates with respect to the reserve is striking. In 2014 the plan to protect its aquifer was launched, but a year ago only 17% of the proposed measures were completed, according to the WWF organization. The plan lacks a fixed budget and a technical office, a lack that the Andalusian Ministry promises to remedy now.

Despite the urgency to avoid the fine of the Commission, on the table of the ministry and the Board is a long-term plan to save Doñana. Ecological Transition must now decide whether to summon all the actors involved (Board, confederation, Coasts, Biological Station…) to announce that great plan. The Doñana Participation Council already proposed a year ago that plan called Doñana 2030, which the Board wants to rename Doñana Future.

Fine for lack of debugging

The problems are not only in how the water is captured, but also in how it is returned to the natural environment. In 2018, European justice included Matalascañas in the list of 11 urban agglomerations in which sewage is not well treated. At the time of the sentence, Spain received a fine of 12 million for non-compliance with those 11 cases, most of them located in Andalusia. And, every six months since then, the fine was increasing depending on the sewage treatment plants that were missing to start up. It has already reached 74.85 million. At this time, according to a letter that Fink-Hooijer sent last month to the Government of Spain, there are only four agglomerations left in this file without resolving the purification problem, which has caused the amount that must be paid to from now on.

Those that remain pending are: Valle de Güímar (Tenerife), Barbate (Cádiz), Alhaurín el Grande (Málaga) and Matalascañas. According to the information that the Executive has transferred to Brussels, the Matalascañas treatment plant would be the last to come into operation, something that will not happen “before 2026”. Municipalities are primarily responsible for wastewater treatment. The one from Almonte, to which Matalascañas belongs, has refused to speak with EL PAÍS about the purification problems.

At the root of the situation is the refusal or the impossibility of many town halls to take charge of the necessary investments to purify their waters correctly (the new Matalascañas treatment plant is budgeted at almost 30 million) and the problems with the processing of the projects. Often, the regional and central administrations have assumed the construction of these facilities. For example, in Matalascañas, where the State declared the new treatment plant to be of general interest in 1993. But, according to the Ministry for Ecological Transition, in 2018 the State Attorney questioned whether that declaration was legal. “This led to the paralysis of all the procedures that were being carried out in relation to the drafting of the project,” explains the ministry. “There have also been problems with the soil where the treatment plant will be built,” explains Antonio Amarillo, coordinator in Andalusia of the water area at Ecologistas en Acción. Finally, at the end of last year, an agreement was closed by which the Board and the central government undertake to jointly finance the work, which has a term of execution of 36 months.