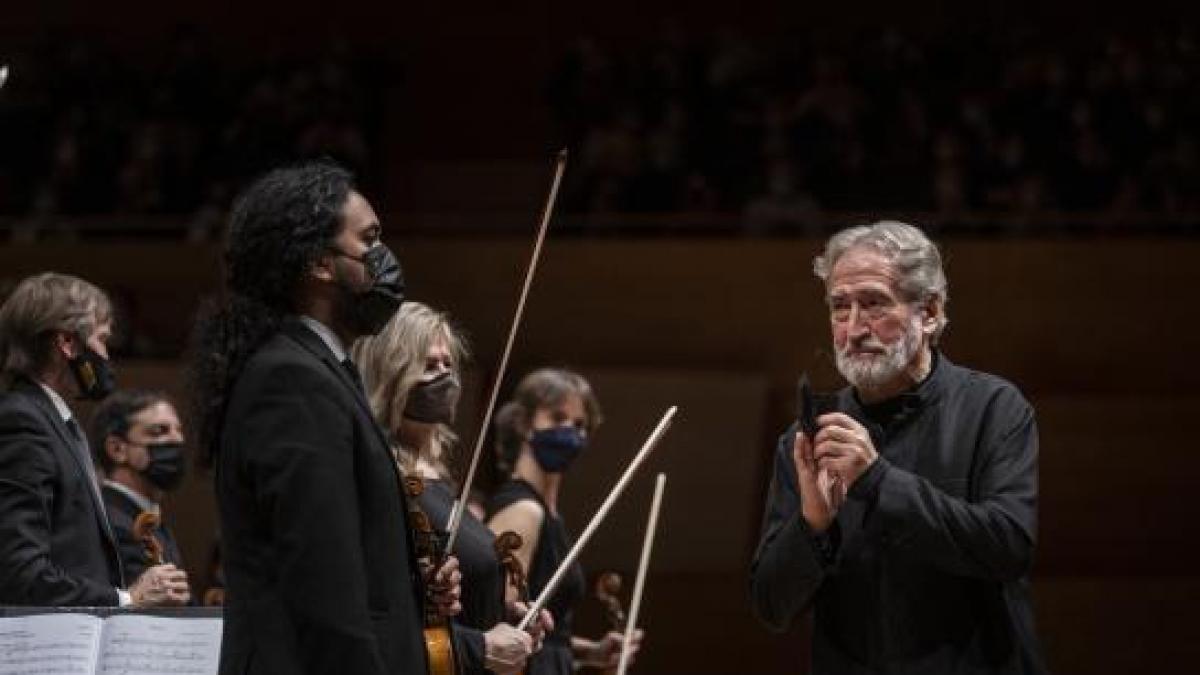 Table Of Contents hide
1. Politics and culture had come together in favor of Creu Roja’s ‘Ucraïna ens necessita’ project. Tickets sold out quickly
2. The public was transmuted after Savall directed the sublime ‘Da pacem domine’ by Arvo Pärt, with the Capella Reial de Catalunya
3. From Samuel Barber’s captivating ‘Adagio’ to Beethoven’s expansive ‘Ninth Symphony’
4. Brotons and Beethoven didn’t just get the audience out of their chairs. They demonstrated the great interpretive moment that is lived in Catalonia
5. Like this:


It would have been impressive if the two thousand people who yesterday filled the Pau Casals Hall of L’Auditori without leaving a gap had ripped out like an English football stadium to sing the songs of La Capella Reial de Catalunya. Or those of the Escolania de Montserrat. And those of the generous Cor per la Pau created for the occasion with voices from multiple Catalan choirs. Because despite the difficulty of the pieces that were performed – including the rossinyol directed by Mireia Barrera, a delight–, the Concert per la Pau that was being held this 30th in Barcelona belonged to everyone. It was, like poetry, for those who needed it.

Politics and culture had come together in favor of the project Ukraine ens necessita of the Red Cross. The tickets at the single price of 25 euros sold quickly and totaled, as of yesterday, more than 50,000 euros, counting the extra donations. In any case, the action went beyond the collection effect, because when it comes to calling for peace, music has unexpected effects.

Politics and culture had come together in favor of Creu Roja’s ‘Ucraïna ens necessita’ project. Tickets sold out quickly

With some eighty instrumentalists led by the violinist Vera Martínez-Mehner (Quartet Casals) as concertmaster, the Orquestra i Cor per la Pau, which has been formed in a matter of fifteen days for this event with solidarity, performed a dozen of pieces: from the subjugating Adage from Samuel Barber to the expansive Ninth Symphony of Beethoven; from The great gate of kyiv of the Pictures at an exhibition from Mussorgsky to Madrigal on a popular theme ‘El cant dels ocells’ of Montsalvatge.

The public was transmuted after Savall directed the sublime ‘Da pacem domine’ by Arvo Pärt, with the Capella Reial de Catalunya

And even in a one hundred percent secular venue like L’Auditori, music can take on a radically spiritual form that soothes hearts. This was without a doubt the sublime moment Da pacem dominate offered by Jordi Savall with the Capella Reial de Catalunya. And also in a triple way, because to observe the evolution in time he began with 40 seconds of an anonymous Gregorian, linking it with the Da Pacem by Gilles Binchois from the Belgian fifteenth century and leading to the one composed by Arvo Pärt before the horror of 11-M. The public was transmuted.

“The power of music is to bring us a little peace and serenity at this time when we are all anguished by what is happening,” Savall said moments before the concert. We should be aware that we are living in a very delicate moment for humanity and that we are behaving a bit like people in the Titanic when it was about to sink: we continue to lead normal lives as if everything is fine. I think we should be more reactive and aware that what can happen in Ukraine could mean the end of civilization. Globally, the world should react more forcefully to the danger we are running of a madman dropping an atomic bomb.”

The concert, which was to last an hour, started with a Ukrainian composer: Prayer for the Ukraine that Valetín Silvéstrov composed eight years ago (Kyiv, 1937). It was conducted by Ernest Martínez Izquierdo, founder of the famous Barcelona 216 contemporary music ensemble. he followed him The Great Gate of Kiev from Pictures at an exhibition by Mussorgsky, which Ravel once orchestrated. Xavier Puig, current head of the Vallès Symphony, took on the piece.

To the Adage de Barber, who directed another Catalan baton, also the pedagogue Jordi Mora, was followed by what was the first choral piece: the traditional the rossinyol with a Mireia Barrera always at her right point… And after the aforementioned Da Pacem de Savall, an American diva based in Catalonia appeared, the mezzo-soprano Joyce DiDonato, who performed an impeccable Morgan! by the German Richard Strauss, under the direction of Pedro Pardo.

And in this emotional journey through musical Europe, the time came for the British Elgar, with Nimrod Adagio his Enigma Variations… to lead all this in the fourth movement of the Ninth Symphony of Beethoven. With the genius that characterizes him, Salvador Brotons unleashed the bravery of the eighty instruments and as many other voices, which raised the Beethovenian cry of brotherhood, exalting the public.

Brotons and Beethoven didn’t just get the audience out of their chairs. They demonstrated the great interpretive moment that is lived in Catalonia

Together with the four soloists –Russian soprano Katerina Tretiakova, Belarusian mezzo Marina Pinchuk, tenor Airam Hernández and baritone Mattia Olivieri, convened by the Victoria de los Angeles Foundation–, Brotons and Beethoven not only got the audience out of their seats. They also demonstrated the great interpretive moment that is lived in Catalonia.

That high point did not, however, put an end to the concert. In fact, it was closed by the Catalan dean of symphonism, Antoni Ros-Marbà, playing Xavier Montsalvatge in his Madrigal on a popular topic ‘The song of the ocells ‘. The Escolanía de Montserrat and the cellist Miquel Keenan Fuentes, who emerged from the Fundació Pau Casals competition, brought tears to their eyes, visible or invisible. For Ukraine and for Europe.