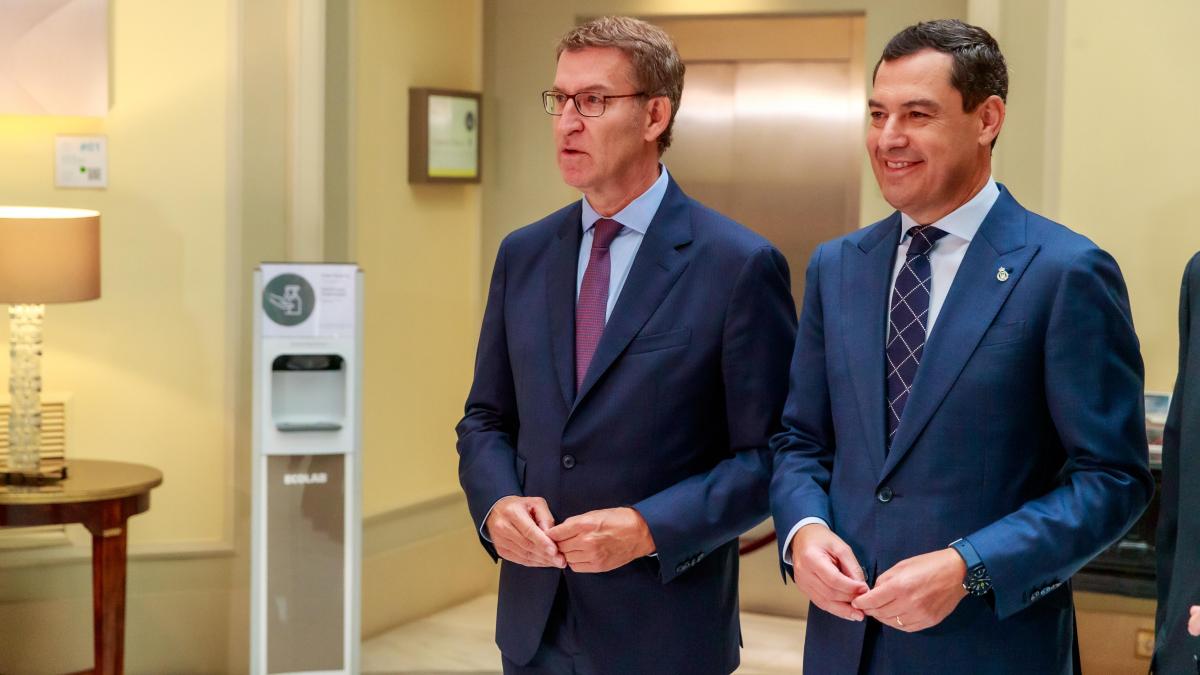 
When Manu Leguineche and Jesús Torbado searched Spain for “moles” who had spent 40 years hiding from Franco’s repression, one of them confessed: “In this country there are only two parties, that of the rich and that of the poor.” In the opinion of several ministers, bipartisanship now also consists of having a party for the opulent and another for the needy; “of the people”, in the new government lexicon. Consequently, the right favors their own, who are the rich, by removing the wealth tax, the left compensates for injustice with a tax on large fortunes. What the PSOE did not want to do in June when the Podemos partners asked it, it does in September forced by the opponents of the PP.

Moreno Bonilla’s initiative became a real political and journalistic test. It was as if the Andalusian president had put his hand in a hornet’s nest. The first wasp that came out was the populist one: “what they forgive the rich, the working middle class pays,” said the socialist catechism, placed in electoral mode. There was no lack of conservative reply: the 95 million that are not collected in Andalusia are a tenth of the theft of the ERE. Prosecutors around the world are amazed at the depth and rigor of the debate.

Second wasp, the ghost of the Loapa, that norm that clamped the autonomic process. That law, a consequence of 23-F, was justified by Martín Villa with the argument that it was illogical for neighboring towns to have different economic rules, different prices and different general legislation because they belong to different autonomies. Competences had to be harmonized, and they were normalized. In 2022, harmonizing is once again, as it was 41 years ago, the euphemism for centralizing. Centralizing is something horrible in an autonomous State, no minister wants to say that word, it is anathema, it is unconstitutional because it threatens fiscal autonomy. Much better to leave it, at most, in dumping or unfair competition.

And the wasps swarm in attack formation when pride and grievance mingle or compete. Moreno Bonilla donned an Andalusian cloak reminiscent of Rafael Escudero and his fight for first-class autonomy, and assured two things: one, that what was lost through heritage will be compensated with the arrival of new taxpayers, who are expected to be imported from other communities; another, that Andalusia, with this step, is measured “from you to you” with Madrid and Catalonia.

There is the Andalusian pride, which mobilizes more than the tax. But there is also the gasoline for the fire. Madrid applauds the regional competition because Ayuso did the same. Catalunya – all you have to do is read the articles of The vanguard yesterday – understood it as an attack on the jugular, and Pere Aragonés added the initiative to the bulky catalog of grievances and asked the PP to put an end to his “tax Catalanophobia”. Moreno Bonilla did not count on this. But, above all, Núñez Feijóo did not count on this in his campaign of cordiality. Cordiality, so desirable, stumbles every day with a shipment of dynamite. The last one, of fiscal dynamite.

Page Moncloa would do well not to underestimate García Page’s diagnosis: the PSOE is harmed by “bad company”. And they harm him, above all, in some communities. It is difficult for the Page voter to understand the pacts with Esquerra. And with Bildu, literally impossible.

Management Latest Metroscopia study: 82% of Spaniards believe that the Government should put management before ideology and a notable majority also believe that the opposite is being done. Perhaps that explains the voting intention.

citizens Arrimadas is making a sublime effort to connect with society and defend his leadership. Only one detail is missing: since it is not likely that he will govern, to demonstrate the usefulness of the vote to that party.

Pardon Brainstorming to justify Griñán’s pardon. Who else speaks, the Minister of Justice. Be very careful, words play tricks on you: to pardon is to forgive, not to correct a judicial sentence. And that is what Mrs. Llop does.

Specks If Feijóo received a diploma for each grade he receives from the PSOE, he would need the walls of a street to hang them. The last one, by Gómez de Celis: “sad”. They’re going to exhaust the dictionary of insults.

Taste advertise The vanguard that “the beer will be a little more bitter from next year.” And Pedro Sánchez exclaimed: “If only it were the beer…!”