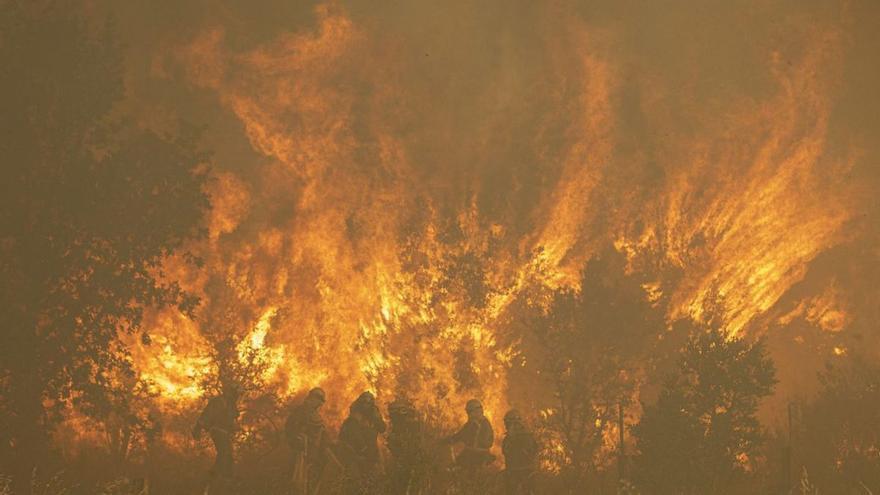 Table Of Contents hide
1. Greatest fires throughout history
2. because of forest fire
3. an insufficient answer
4. Is there any solution to the problem?
5. Like this:


in June 2017 Forever changed our understanding of wildfires in Europe, On the 17th, a fire campaign began on the peninsula in Pedrogo Grande (Portugal). It did so with an extremely massive fire that at its worst devoured nearly 5,000 hectares and claimed the lives of 66 people.

This was the first fire storm that we have evidence of in the Iberian Peninsula. At the moment of maximum intensity, the energy emitted by the Pedrogo Grande fire was equal to 27 nuclear bombs per hour,

We write these lines when a wave of fire opens the still early season in the Iberian Peninsula. We are in a situation that bears some parallels with what happened in that horrific June 5 years ago. Will the nightmare repeat itself? Have we learned anything?

Before addressing this issue, we would like to remind you that neither fires nor extreme fires are recent events in nature. the first documented fire occurred 420 million years ago,

The first catastrophic fire that we know of, according to current theories what constitutes an ecological catastrophe, Occurred 350 million years ago in the city of Mayo, Ireland, Megafires not only burned vegetation, but also destabilized the biogeochemical and sedimentary systems to such an extent that fish populations were destroyed downstream.

Similarly, we know that fire storms (also known as sixth generation fires) occur only occasionally, though infrequently, outside the peninsula. The most recent near our geography was in 1949 in the French LandesNear Bordeaux.

What is new is the repetition of these events. Globally, we are seeing an increasing frequency of extreme fires that some also considered unprecedented,

because of forest fire

result of excessive fire have a large accumulation of fuel or vegetation which are connected in landscape scale. That is, continuous forest mass, without management or abandoned, and with little disruption by agricultural fields.

water pressure, which results from competition between trees (due to lack of management) and dried Due to climate change, they cause these forest masses to go up in flames.

When the ignition of these flammable masses occurs under heat waves that make the atmosphere excessively dry, or strong winds and slopes, great fires are assured.

Night usually provides a window of optimal conditions for dealing with the extinction of the fire. but climate change Night temperatures increase more than daytime temperaturesWith more than a notable effect on extinction potential.

Under these conditions, the fire grows so rapidly that the energy produced can exceed the energy emitted in an atomic bomb such as Hiroshima. In this case, the fire creates its own fire environment: its own diffusion pattern, altering even the seasons.

Our response to increased virility is always the same: growth means growth. on a continental scale, European Civil Defense Mechanism This has been augmented with more extinguishing resources, but they will always be a drop in the ocean during pyrocraze. More important than increasing the extinguishing media is adapting your preparations and response to pyrometeorological conditions.

In Portugal, the need to address structural causes associated with the area was recognized politically and an Agency for Integrated Fire Management was created with an increase in the budget for prevention. Other countries will be able to learn from the Portuguese experience and monitor the future results of this approach.

In Spain, always committed to more and more large aircraft, firefighters often have precarious working conditions. Leveraging its extensive knowledge to develop preventive actions in winter would be a more effective investment, though less effective, than buying larger aircraft. Let’s remember that, according to the calculations of firefighters, more than 75% of air discharges are disabled.

Even the European Commission has acknowledged the need for Approach firesmartBut almost everything on the ground remains to be done.

Is there any solution to the problem?

We will always have big wildfires. But we can reduce its likelihood, frequency and size if we reduce the continuity of forest landscapes and promote a mosaic of vegetation types and less accumulation of fuel.

In extreme weather conditions, management measures may not slow the spread of fires, but they potentially reduce the energy released, making the fire easier to control. Reduces fire severity and increases area resilience,

We should also pay immediate attention to climate change.

Our way of dealing with the problem of forest fires, more means and less management of the area, is leading us towards nuclear war against nature. And this is a war we are not going to win. We should find solutions in forestry science and engineering and not in political slogans. The next firestorm could strike the peninsula at any time.

This article is originally from . was published on Conversation, read the Original,