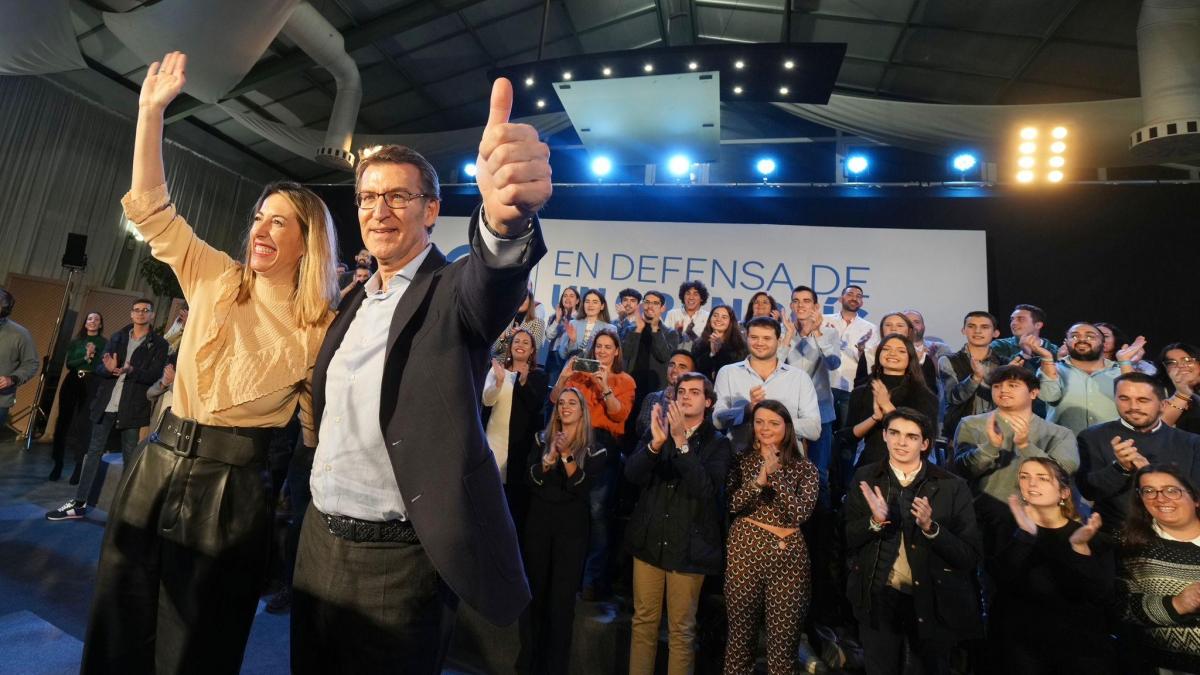 Table Of Contents hide
1. Feijóo denounces that in Spain someone is in charge “who does not give a damn about Spain”
2. Like this:


While the deputies debated in Congress the taxes on large fortunes, banks and electricity companies, or the repeal of the crime of secession, the president of the PP, Alberto Núñez Feijóo, who does not occupy a seat in the Lower House, took advantage of one of the acts of the campaign “In defense of a great country”, with which he will tour Spain, to set a profile.

A rally, with a marked electoral tinge, where he defended that the repeal of the crime of sedition that was voted in Congress supposes “unprotecting the state and unprotecting coexistence.”

Feijóo accused Sánchez, therefore, of “subjecting the Constitution to the verdict of those who fail to comply with it”, and for this reason he called on the Prime Minister to say that everything that was fought to maintain the unity of Spain has been for nothing. “That he tell the judges, the police, the civil guards and the non-independence Catalans, that everything they have done has been useless, that everything was well done.”

In addition, the leader of the PP recalled that Sánchez stood up for the elections with other approaches different from those he is carrying out in the Government. “Nothing remains of the candidate Sánchez,” he said, assuring that he would criminalize the calling of any consultation against the unity of Spain. Now, he said, all that remains is “frivolity, lies and deceit, because the only thing that he has done from the Government is that” in Spain he sends who Spain does not give a damn about “.

In addition, the president of the PP complained that Pedro Sánchez, as happened on Tuesday in the Senate, is silent when asked about these matters, but has come to the conclusion that “his silence is thunderous” and that silence “is more answers and more candid than he has ever had as president.

But sedition was not the only object of the act that Feijóo starred in Badajoz with the candidate for the presidency of the Junta de Extremadura, María Guardiola. The president of the PP also spoke of the tax on the rich, on the banks and on the electric companies, which the PP rejects and which, in his opinion, has many overtones of illegality. In fact, he believes that in all companies the lawyers are already studying how to appeal those taxes, and there are many fears that this money will have to be returned. However, he believes that “it would be a joke if this government collects and spends the money from those taxes, and the next government has to pay back.

And the Law of “yes is yes” was another of the issues that the president of the PP addressed, to reproach Sánchez for being “incapable of rectifying an error” and for having Spain “a more insecure and less free country.” He has taken “a step back in defense of women.” And that is why he believes that he should rectify, “ask for forgiveness and restore dignity to women.”

The conclusion of Núñez Feijóo is that Sánchez will leave the Government in 2023 “and will have bequeathed us a lost legislature”, and that is why the PP believes that it will win the elections, because “Spain has lost a legislature and cannot afford to lose other”. He will do it, he said, with proposals, because “the more they disqualify us, the more we will work, and the more they insult us and disqualify us, the more strength we will have.”

Feijóo presents that PP in front of a Sánchez who “no longer presides over the Government, but a coalition of Interests” that has approved not a budget, but measures “to finance the year he has left in La Moncloa and prepare the electoral campaign”.