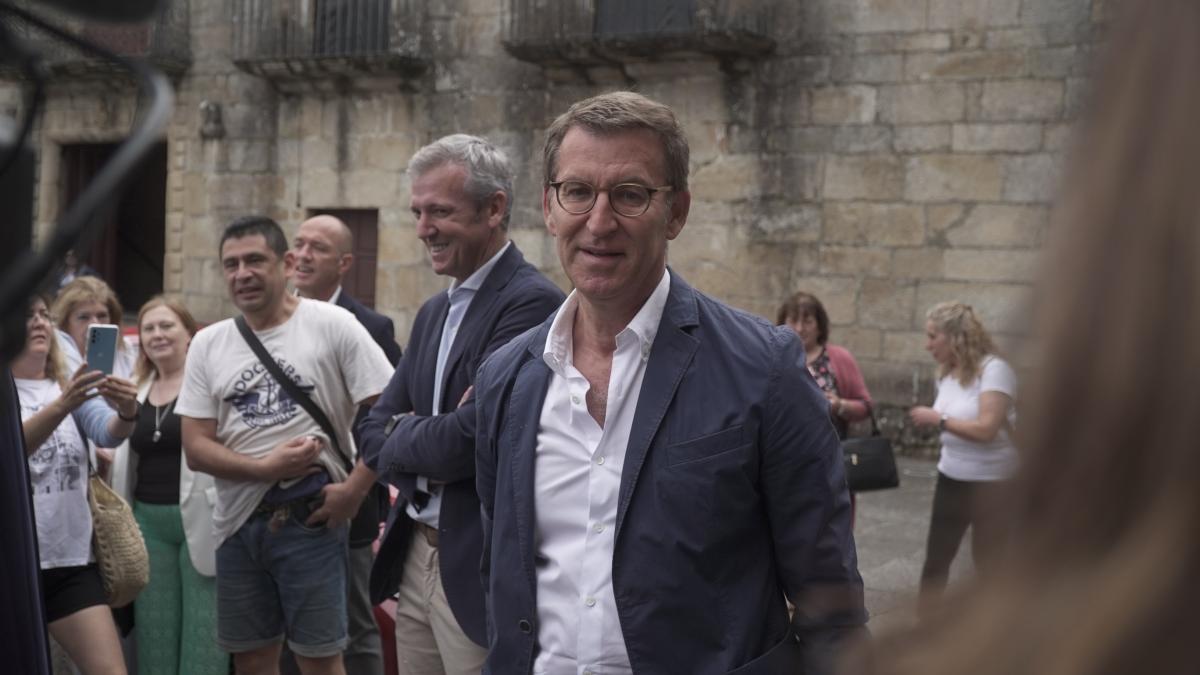 Table Of Contents hide
1. Feijóo asks Sánchez that after reducing the ministers they sit down to talk about energy
2. The leader of the PP predicts a very complicated situation in the fall for the industry
3. Feijóo sees in Bolaños’ words an instruction from Sánchez to attack him
4. Criteria for the renewal of the Council of the Judiciary
5. The leader of the PP, worried that the fanaticism of Borrás is the one in charge in Spain
6. Like this:

As categorical as Pedro Sánchez’s denial was about a possible government crisis, the president of the PP, Alberto Núñez Feijóo, not only did not rule it out, but also places it very close in time. For this reason, in a press conference held in Porto do Son (A Coruña), the popular leader asked the President of the Government that when he undertakes it, he take the opportunity to reduce the size of his cabinet and the number of senior officials and advisers, because “they do not you can have the most expensive government in history in the most expensive summer.

The second reason to see the remodeling closely is that “the last time that Sánchez said that there would be no changes in his government after nine days, he replaced eight ministers, including his vice president, the Minister of Transport, who was secretary of organization of the PSOE, and his super chief of staff”.

That is why he asks him to take the opportunity to “reduce the number of ministers”, because “Spain cannot afford a government of these dimensions”, and reducing the cabinet would contribute, Feijóo said, to “improving the political environment in Spain”.

But it is not enough to change the government. Feijóo believes that after this change, Pedro Sánchez should call the leader of the main opposition party and “sit down to do reasonable things in terms of energy.” In the opinion of the leader of the PP, the energy problems that Spain has are not solved with the savings decree approved by the Government, but the problem must be faced in all its breadth, starting with the problems that industries may have to continue operating .

Feijóo proposes a great central government agreement with the Autonomous Communities and with the productive sectors, if they really want to tackle a problem that is beginning to be seen with the destruction of employment “which is very worrying.” He is willing to work seriously to find the best way to deal with this situation that may arise in the fall, with “a very complex moment”, which should make everyone work in the same direction.

The president of the PP also referred to the document made public by the Government on an agreement between the Minister of the Presidency, Félix Bolaños, and the former Secretary General of the PP, Teodoro García Egea, in the negotiation on the renewal of the General Council of Power Judicial. A document, Feijóo insisted, that he did not know, that Casado did not speak to him about when he made the transfer of powers and that was never discussed “neither in the current management committee nor in the previous one,” he said.

A document also, which in his opinion has no value, because in the interview he had with Pedro Sánchez in La Moncloa, four days after being elected president of the PP, it was clear that he was starting from scratch, and “conversations were resumed” , not “the negotiations, because we were beginning a new stage”, in which we started from scratch.

Criteria for the renewal of the Council of the Judiciary

The only document that Feijóo recognizes is the one that he himself sent to the Government with the PP’s proposal, which must go through the renewal of the Council with minimal criteria, such as not choosing judges close to any party. And also the commitment to modify the law of the Judiciary so that a judge who is a minister cannot immediately return to a court, but two years have to pass; that a minister cannot be directly president of the Supreme Court chamber, nor a member of the General Council of the Judiciary, until seven years have elapsed; and that to be president of the Chamber of the Supreme Court, 25 years of experience in the judiciary is required.

It is the document that the president of the PP believes can serve for an agreement, as soon as the Government wants to resume talks, and does not take into account the words that Félix Bolaños dedicated to him on Wednesday, who said that Feijóo “is not trustworthy” , because he considers that this outburst and others to which he is the object have to do with “instructions that were given after the Andalusian elections, to go against me.”

The leader of the PP, worried that the fanaticism of Borrás is the one in charge in Spain

Feijóo was also asked about what happened in Barcelona on Wednesday, during the act of remembrance for the victims of the 17-A attacks, when a group of pro-independence radicals boycotted the minute of silence, and was joined by the leader of Junts Laura You will erase For the president of the PP, “there are politicians who practice fanaticism in their ideology, in their behavior and in their personal attitudes. What worries me – he added – is that these politicians rule in Spain and are preferred partners of the Government”, as they are, he said, Junts or ERC, which in his opinion “cannot hold the key to governability.”