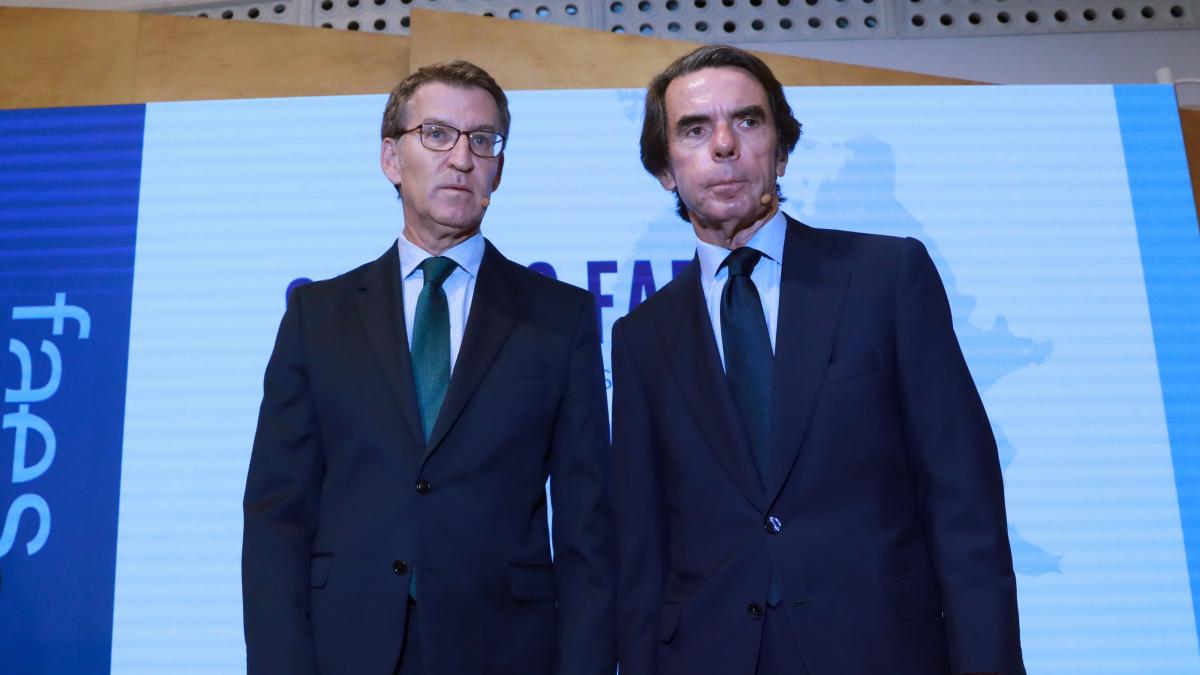 Table Of Contents hide
1. Feijóo is committed to learning “from those who have done it best”
2. Aznar describes the tax on large fortunes as “typical of a carnivorous left”
3. Feijóo fights back and accuses Sánchez of not wanting to lower taxes on medium and low incomes
4. Feijóo and Azar reproach Sánchez for criticism of NATO from the Government
5. Like this:

If José María Aznar already did it in the 90s, why not copy the recipes that served to balance the accounts in Spain. It is the reflection of Alberto Núñez Feijóo, who at the closing ceremony of the FAES Campus, was in favor of doing the same as he did when he came to the Government in 1996: lower taxes, collect more, achieve economic growth and reduce the deficit to zero, without public services would be affected, but the opposite.

Feijóo and Aznar starred this afternoon in a conversation on “Europe after the Russian invasion of Ukraine”, in which the two political leaders showed agreement in condemning Putin for the Russian invasion of Ukraine; in tune to support the policies of the United States, NATO and the European Union, and in tune in criticizing the measures adopted by the Government of Pedro Sánchez. The only thing in which they differed was in the tone and in the adjectives dedicated to Pedro Sánchez, more resounding Aznar, with softer words Feijóo. The former president referred to the tax on large fortunes that the government intends as “a tax of the disoriented and carnivorous left.”

And as a result of that harmony, José María Aznar gave all his support to Alberto Núñez Feijóo and made himself available to help him get to La Moncloa. “I hope that soon you will be president of the Government of Spain. You meet all the conditions to be president and it is desirable that you be the next president, and we will do everything possible for whatever you are,” said Aznar. Feijóo’s response was humble: “I’m going to try.”

Later, when the moderator of the conversation asked Aznar which leader is needed to deal with the situation, the former Prime Minister limited himself to pointing to Feijóo. The current leader of the PP also replied: “I cannot comment on anything that has said President Aznar”, affirmed the former Galician president, who promised to “learn from those who have done it better”. That is why he promised: “If he touches us, he will tell President Aznar to lend us a hand.”

Gone are the times when José María y Aznar and the then president of the PP, Pablo Casado, intervened in a similar conversation without looking at each other’s faces and with veiled criticism from the former Prime Minister of the PP leader at that time.

The biggest coincidence between Feijóo and Aznar was regarding the tax cut. Aznar endorsed Feijóo’s proposal to deflate personal income tax and “competition” between communities, as Madrid and Andalusia have done with the suppression of the Wealth Tax, which he considers “healthy”.

Feijóo counterattacked the Government’s campaign to underline that the PP wants to lower taxes on the rich, due to the abolition of the Wealth Tax in Andalusia, accusing Sánchez of “not wanting to lower taxes on medium and low incomes”, because the The PP’s proposal is to lower the IROF for those who earn less than 40,000 euros. “Let him do what he wants with high incomes -said Feijóo-, but lower personal income tax on medium and low incomes”. Something that both reproach Sánchez for is that he “continues spending as if nothing were happening” and for considering the different tax proposals as “fiscal frivolities.”

The leader of the PP and the former Prime Minister also agreed that the same energy policy cannot continue to be defended now than before the energy crisis began. Aznar considers that “in the analysis of the situation, the international deadlines and agendas, the deadlines and the mechanisms to meet the objectives are unfeasible and impossible”. Feijóo also considers that the transition schedule cannot be maintained given what is happening, and that an energy source cannot be given up until its sufficiency is assured. Later, you can bet on that transition.

Another issue in which Feijóo and Aznar showed agreement was in criticizing the Government’s position, hesitant, due to the position of United We Can with respect to NATO. “I would like the Government of Spain to have no doubts about defense and foreign policy, and to strengthen relations with the United States and NATO”, because “being against NATO today is irresponsible” and Spain “has to be a reliable partner, and not discuss within the government about what we are, nor discuss in the government about military spending”.