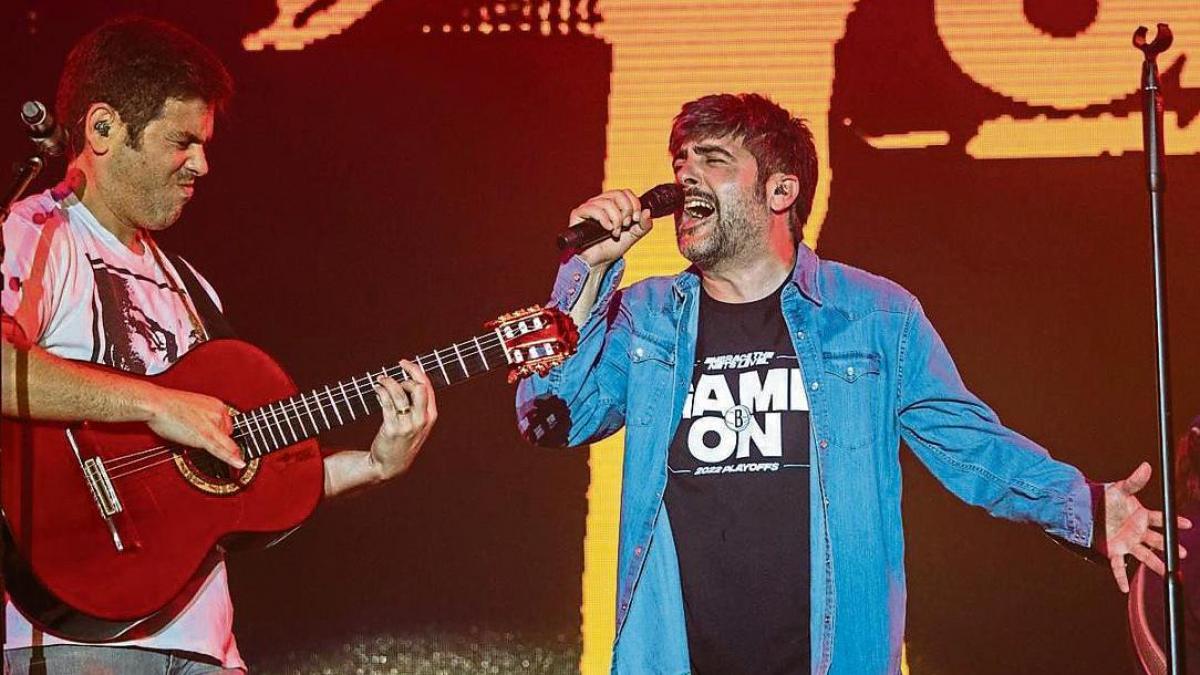 Table Of Contents hide
1. The band covered its career with about thirty songs performed with power and clarity
2. The Muñoz brothers offered a concert that became a collective post-covid party
3. Like this:


It was supposed to be October 30, 2020, but it was last night. It was the day of a new baptism for Estopa, the hard-working duo formed by the brothers David and Jose Muñoz, because they were making their debut in a large open-air concert in the city of Barcelona. It was the first time they did it and the response of their unconditional supporters club was up to the task, starting by selling out the 25,000 tickets to access the Parc del Fòrum, the venue for the concert-celebration.

They appeared on stage half an hour later than expected, at half past nine, supposedly for a lighting issue: that the night had already made an appearance to be able to adequately display a presentation video of the band’s musicians and the Muñoz brothers, by way of casting from a movie. The video was preceded by the sound of an airborne alarm… and the party began.

At that time, surely many must have thought that what was happening was something that perhaps three months ago was not so clear: 25,000 fans, crowded together and sharing joy and love of music in a space like the Fòrum without limitations. And after the one that has fallen. David Muñoz already said it in one of his brief speeches, in the midst of collective catharsis: “We wanted to sing much earlier and we want to dedicate this concert to all the people who are not here because of the coronavirus.”

That space had been chosen by its protagonists at the time to celebrate the end of the Fuego tour in a tremendous way, in reference to its last album released in October 2019 and also to celebrate its twenty years of successful career. The appointment had to be postponed twice due to the pandemic but finally last night things came to fruition. The mass of fans that gathered was mostly from the same generation as the Muñoz, as well as a significant younger component. The faces of satisfaction from each other, hoarse when some of the essentials sounded, was the best proof of objective accomplished.

And the means used to achieve that magic were effective, powerful and brilliant. A large stage, a screen of respectable dimensions in the background and another three placed to facilitate the visibility of the fan who was further away. Impeccable lighting and sound, and above all, a caring band of musicians. Under the musical direction of drummer Miguel Ángel Bao, that superb wall of sound became a reality thanks to the forceful electric guitars of Ludovico Vagnone and Israel Sandoval, the flamenco of Juan Maya, the bass of Antonio Ramos the percu of the great Luis Dulzaides and the keyboards of Nacho Lesko.

Visibly happy and without getting nervous before the challenge, the Muñoz brothers reeled off thirty songs from their extensive, well-known and very successful repertoire for a little over two hours. The selection was distributed: logically the ones that have worked best from his last album Fire and with a focus on the albums from the first half of their career, such as the one that gives the group its name, Destrangis, is the street yours? Y ultrarumba voices, as well as in the cuts of the initial demo of the band, and quite the opposite with albums like Allenrock. The party kicked off with the infallible your warmth the one he followed Red wine and the package of Splitting the corduroy, Last line, The slit in your skirt, When the moon falls, Sorrows with rumba Y The one in the middle of the Chichos.

In the final part, more songs from that initial demo such as I’m short of breath, so lonely either listen to me prince a, this practically unpublished until last night and performed only with voice and guitar by the Cornellà brothers. This look at the birth of the band would find a glorious climax already in the round of tips when David and Jose wanted to lower the curtain with Red eyes, piece by piece either like shrimp, this last one also from the aforementioned layout and a small wonder… like last night’s party.