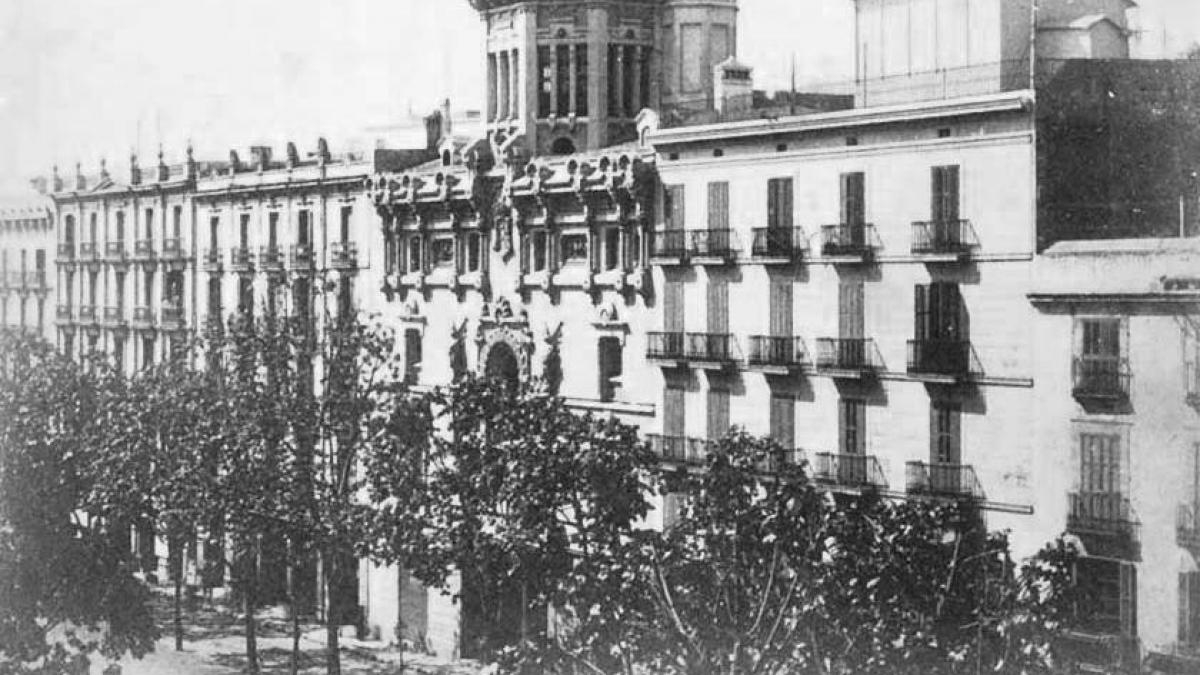 * The author is part of La Vanguardia’s community of readers

In this new chapter of a series of reports on the origin and history of the Ramblas in Barcelona, ​​we are going to review some of the emblematic buildings and shops on the Rambla de los Estudios on the Raval side.

In this part, the numbering was complicated, as the convent with Belén’s church, seminary and small garden coexisted on the site, which lacked the numbering on the Rambla de los Estudios and the current building of the first number. The area, along with the Hotel 1898 and Calle Pintor Fortune, was not opened until the Ramblas in the mid-1930s, ending in Calle Zucla.

In 1879, part of the plot of the Rambla section was acquired by Antonio López, Marques de Comillas, next to the Almación El Siglo building, to produce the Old Tobacco of the Philippines building.

The property of the El Siglo department stores, which had begun to occupy Rambla’s No. 5 and Zucala Street 10, 12, seeing the progress of the sale, bought Rambla’s 3 and 7 and Zucla Street’s 8 buildings, tearing them down. To be able to build down more department stores.

With the construction of the new El Siglo building, it will move from the Tabacos de Filipinas building to the building of the Royal Academy of Sciences and Arts of Barcelona, ​​which today is also the Poliorama Theatre.

The fire of 1932, which destroyed the entire building, modified part of the building in the area towards Raval.

The city council took advantage of the disaster to open Calle del Pintor Fortuny, giving that part of Raval an exit from the Ramblas, replacing the number of buildings.

number 1. On the first floor, in 1881, the first office of the Philippine Tobacco Company was located, which, in 1929, demolished the old building and erected the current one (only on the Ramblas side). It was designed by the architect Josep Oriol Mestres, who, with the opening of the Calle de Pintor Fortuny, created the new façade, which never had a range before.

At the corner of Pintor Fortuny with Xuclá is a space with the figure of Mariano Fortuny, born in Reus on June 11, 1838, created in 1922 by the Oslé brothers.

They had their offices in the building of the Transatlantic Company, the National Company for African Colonialism and the Hispano Colonial Bank during the 1940s. In 1934, the Carault Exhibition Hall. In the 1950s there was Transcoma Custom Company and Ultramar Espress, a SA travel agency. Today the building is occupied by Hotel 1898.

Number five. It was the first location on the Ramblas de los Estudios where El Siglo stores were located in 1881. Later, after the fire, the site became a place where traveling circuses and various companies eventually settled. In 1956 it became the Manila Hotel, where the Manila Gallery was established, along with the Manila Grand Cafeteria, Mari Lola Farm, VDA Painting House, Monfalcon, Barcelona’s Little Theater and other shops of the time.

In the early 1990s, the Le Meridien Company acquired the hotel and, after restoring the facilities, transformed it into one of the city’s best hotels in November 1991.

Number 7. In the late 19th century, it was occupied by other companies, before the building was taken over by El Siglo Stores. A new building was constructed after the Fire of the Century on December 15, 1955, the Astoria Galleries were opened, which were active until 1968, when the complex was acquired by some French supermarkets.

September 19, 1892, was an important day for the development of PawnWhich by Sunday was the 18th editorial office, administration and printing office at Calle Barbara 16 bis and by that Monday, due to the increase in circulation, it was forced to move all departments of the newspaper to No. Rambla of study.

Later, Pawn He moved to Pelayo Street and El Siglo Stores took over the entire building to build his empire. As we have already mentioned, the fire and demolition of the building on the ground floor led to the opening of the Astoria Gallery in 1955, which was active until 1968.

number nine. One of the first buildings located on the Ramblas, it was built in 1764, the Royal Academy of Sciences and Arts of Barcelona, ​​a modernist building designed by Josep Domenech i Estapa. In addition to housing the RACAB’s headquarters, at the end of the 19th century it was to house the Marti Cinema on the first floor, the city’s first cinema, inaugurated on April 13, 1899, closing its doors in 1903.

The number of visitors to the campus and the need to obtain more funding for the Academy to survive prompted the move to move the campus to the ground floor and the construction of the Polyorama Theatre.

In 1906 it reopened its doors as a theater with the current style, which could host theatrical performances, artistic performances and film projections, with a capacity of 630 spectators.

was the first show parrot loggerA work done by the automaton, which contained some sets that were worthy of the city council’s gold medal.