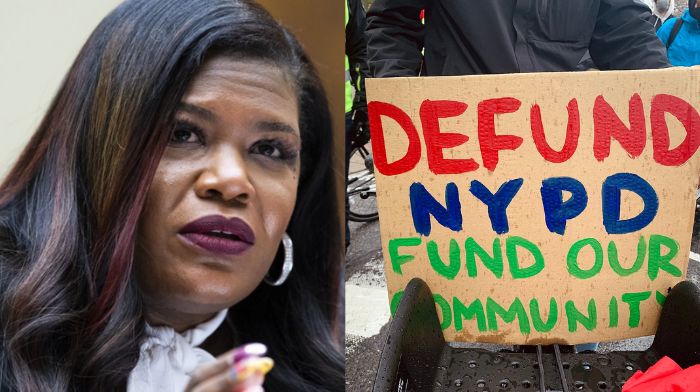 Table Of Contents hide
1. Bush claims it’s a ‘misunderstanding’
1.1. Support conservative voices!
1.1.1. Sign up to receive the latest political news, information and comments sent directly to your inbox.
2. Bush’s fellow Democrats aren’t happy
3. Democrats’ rule of thumb: ‘Rules for you, but not for me’
4. Like this:


With Democrats already facing an uphill battle in the upcoming midterm elections, one of their own seems intent on making that hill higher to climb. During an interview Tuesday, Rep. Cori Bush (D-MO) a member of the far-left “Squad” says he won’t stop calling to ‘defund the police’.

Apparently, the Democrats who can see the writing on the wall have asked her to remove it, and she refuses.

Rep. Cori Bush says she’s not going to stop using “defund the police” before the midterms, even though that slogan has been blamed for Democratic losses in 2020 and some of her colleagues have specifically requested that it not be use. https://t.co/wQ652gVGH8

RELATED: Ana Navarro of ‘The View’ Attacks the GOP for Censoring Liz Cheney: RNC Stands for ‘Republicans Without Drawers’

Bush added that Democrats should better “explain” what it really means to defund the police. But for many Americans, especially crime victims, the message of moving money from law enforcement resources to social programs is loud and clear.

Most Americans want more spending in the police, no less.

Many want the same level of protection that far-left activists like Bush get; after all, she spends a lot of money on your own private security while demanding that the police be defunded.

Defund the police is dead!

The Republican Party will have a feeding frenzy like a pack of vultures. 🐔

During Tuesday’s interview, Bush maintained that she is remembering her activist beginnings and will continue to ask that the police be disbursed. This does not sit well with all Democrats.

Bush says he “absolutely” feels pressure from his colleagues to tone it down. “I’ve had colleagues come up to me” and say that ‘defunding the police’ doesn’t help their districts.”

One colleague in particular, Rep. Karen Bass (D-CA) is running for mayor of Los Angeles and disagrees with Bush. She says that if she is elected, she will bring back to the Los Angeles Police Department its 9,700 authorized officers. Bass told the Los Angeles Times,

“Whether your car has been broken into, your backpack stolen, your property damaged, or you have seen news coverage of home invasions or violent assaults, more and more Angelenos I talk to tell me that crime has touched them personally. And they feel scared.”

Just last month, the White House admitted that the large increase in crime seen across the country is due in part to insufficient funding of the police.

Hahaha. A gift from Cori.

Democrats’ rule of thumb: ‘Rules for you, but not for me’

Bush showed in August 2021 how well he fits in with his fellow Democrats by having the right level of staggering hypocrisy. when it was revealed that he had spent nearly $70,000 on private security for her.

Bush’s defense wasn’t much of a defense, just an unusual level of self-awareness. Bush claimed there had been threats on his life and that he “had too much work to do.”

He added: “So hang in there, and the police have to be defunded.”

Cori Bush: I’ll make sure we have private security, but the police need to be defunded. pic.twitter.com/6jbv4HLlGs

Meeting between Gustavo Petro and Antony Blinken: the topics they will talk about